125 competitors from 14 countries visited Weymouth in Dorset during the week beginning 15 September to fish the EFSA European Boat and Line Class Championships organised by the English Section. The majority of the anglers were based in the Riviera Hotel which provided the facilities for the event HQ. East to north east winds restricted the fishing but the competitors enjoyed some great sport over the five days.

The event is fished to a points system with each species being awarded specific points for the first five landed and a single point for the next five. The ten fish per species limit ensured that the anglers always had to be thinking ahead to ensure that their tactics were spot on. The two hook event saw the organisers supplying bait each day with ragworm from Topsy Baits and frozen mackerel and squid from Ammo being provided. 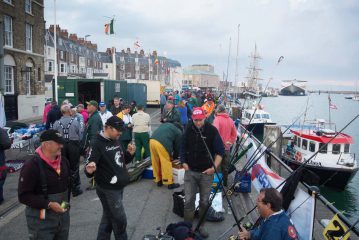 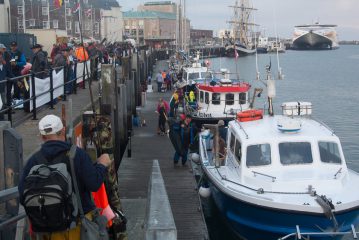 The Boat Championships were fished from Monday to Thursday aboard 14 boats from the top quality Weymouth fleet. The anglers on each boat initially fished against each other with the top score on the boat being awarded 100% and the other anglers receiving a descending percentage score based on the winner’s points. The boat winners are then separated by the number of fish points and if required the numbers of fish.

As is the norm at this Championship the event was closely fought right to the final day with only three anglers having the maximum 300% percentage points after Wednesday and all of the top ten being in with a chance of a medal. In the end it was Anthony Giacomini from Italy who maintained his unbeaten record to score 400% and lift the gold medal and coveted EFSA pin. England’s Rob Shattock finished only 1.3 points behind in second place with fellow country man Colin Searles taking the bronze medal on 395.24 points. 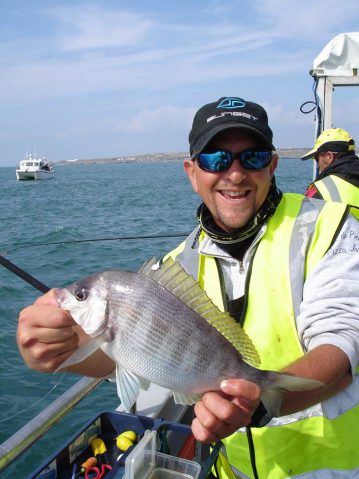 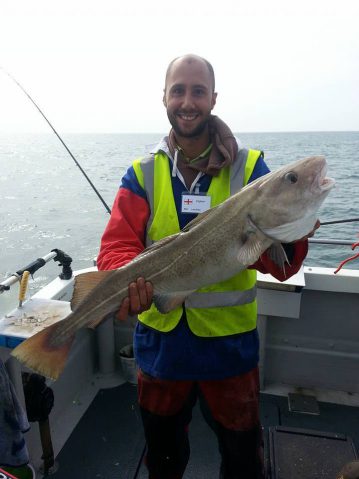 Anthony teamed up with Mauro Salvatori to take first place in the pairs event followed by the English pairing of Rob Shattock and Matt Osbourne. The bronze for third place went to former champion Ray Barron and Neil Bryant, also from the host nation. 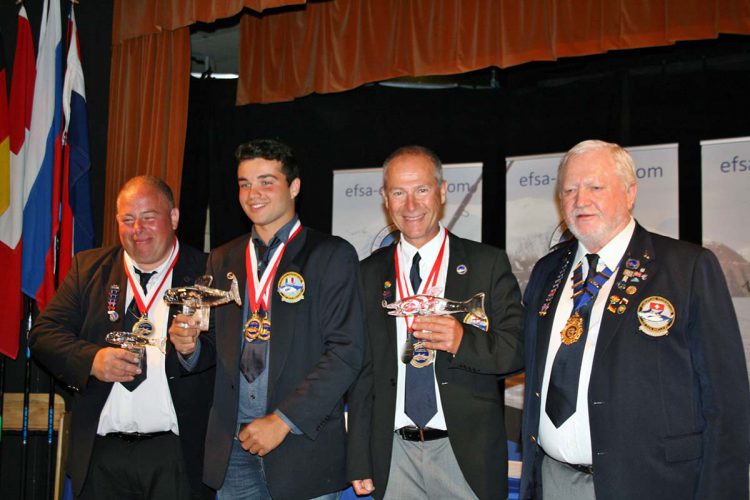 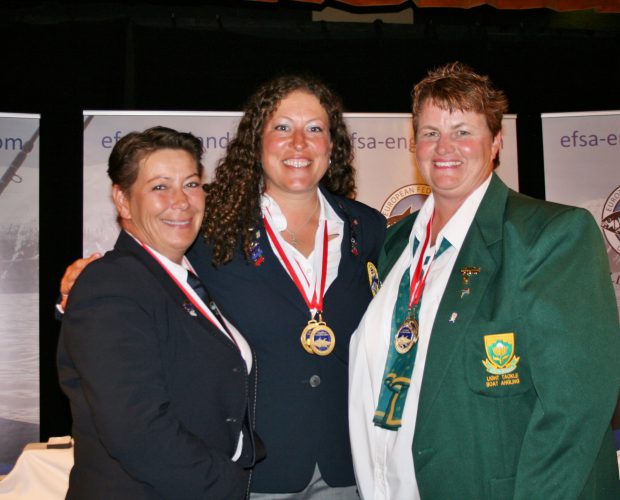 Although EFSA is an organisation for individual members each Championship has an International team event and this year the gold medal went to England ‘A’. Italy ‘A’ took the silver medal with England ‘B’ securing third spot.

The Friday saw the wind dropping off and the sun breaking through as the anglers headed off to fish the one day Line Class event. All the anglers would be using 4kg Ande Tournament line on their reels provided by the sponsor. This was a single hook competition and flatfish only would count. The boats would spend half the day on the Shambles targeting turbot and brill before steaming to the nearby mussel beds to target the spotted plaice. Bait again was supplied with prawns replacing the squid and most boats stopped in the tide on the Shambles to feather for mackerel and sandeels at the start of the day and these were equally shared on the boats. 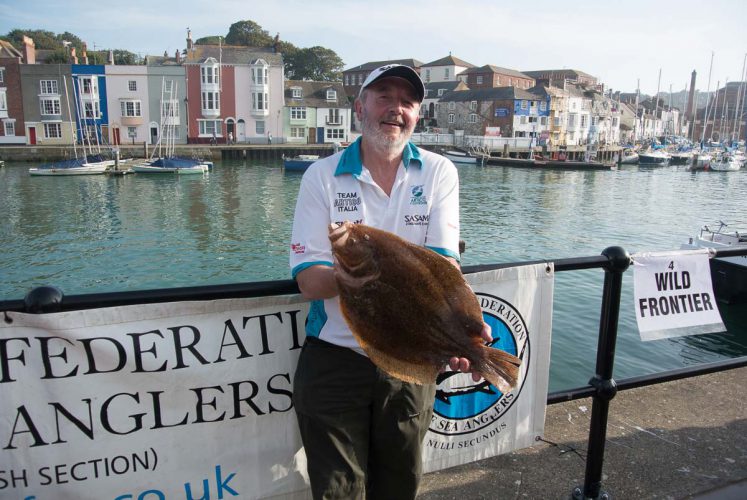 Top fish of the day was a prospective new line class record brill of 1.895kg landed by England’s Richard Russell. Subject to ratification Richard’s fish will fill the vacant 4kg line class record spot in both the European and World record lists.

The turbot and brill failed to show in any great numbers but the recent plaice form of Weymouth continued with several nice specimens landed during a day where the anglers relaxed and had fun after the rigors of the main event. Again the event was fished to the percentage system to ensure a spread of prizes and the boat winners were separated on fish points where a turbot was worth 30, brill 20 and plaice 10 points. 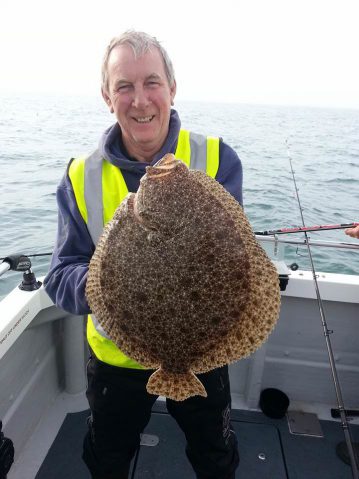 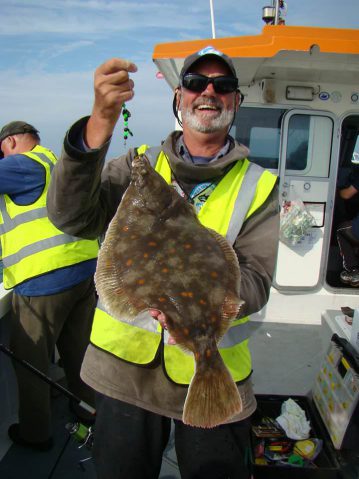 Isle of Wight angler Richard Wheeler took the gold medal with 110 points just 10 ahead of England’s Ray Barron. South African competitor Brett Wieham lifted the bronze medal with a turbot, a brill and three plaice for 80 points. The Ladies event was won by Tina Lustig of Wales, South Africa’s Anita Gower took the silver and Liv Unsgarrd from Norway the bronze. 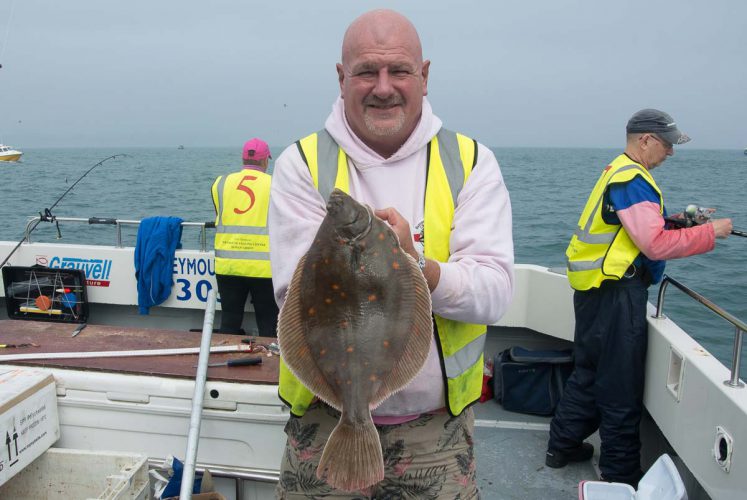 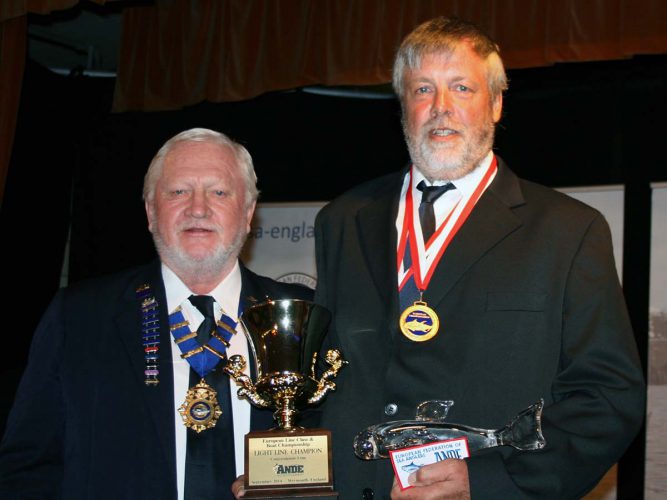 Weymouth’s reputation as the top charter boat competition venue in Europe will be further enhanced during the coming weeks when it hosts the FIPS Mer World Boat Championships and the annual Weymouth International Boat Angling Challenge.

The full Boat Championship results can be found here and the Line Class results here. Visit the EFSA website for information on how to join the Federation and details of the Country Sections.