Smoothhounds run big off the North Wales coast and the area is synonymous with some huge fish. Each year during early summer, Holyhead charter skipper Gethyn Owen is right in the thick of this spectacular action which sees loads of high double-figure specimens and giant hounds to over 20lbs caught, photographed and released.

North Wales is rightly associated with some top catches of large smoothhounds, and they can be found on boat and shore marks around Holyhead, Trearddur Bay, Llanddwyn and Whitebeach to name some well known areas. Smoothhounds have a distinctive grey upper body and white underside. Distinguishing between the common and starry hound is relatively easy. The starry hound’s name derives from the peppering of white spots that fleck the upper part of its body. Common smoothies on the other hand display no such spots. The smoothhound is a is live-bearing species, and can carry between 4 and 15 pups at any one time. 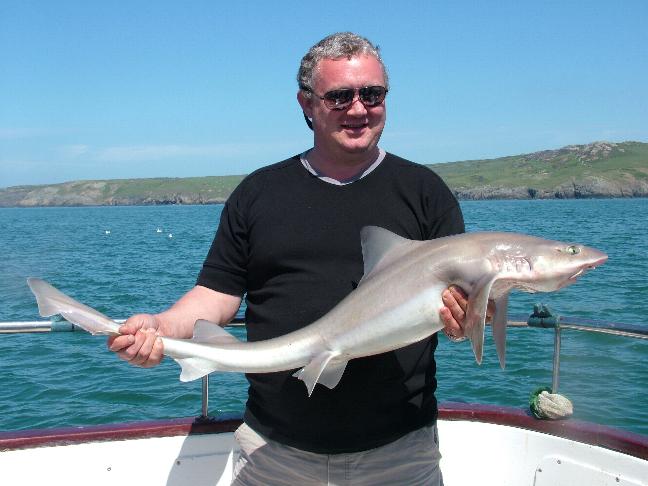 Smoothhounds are usually found in relatively shallow waters around the coastline, feeding on a host of crustaceans including squat lobsters, hermits, shore and edible crabs. There’s no question that crab ranks as the top hound bait, but off Holyhead and elsewhere, when crabs been hard to get, anglers have enjoyed good hound catches on whole squid tipped with three or four large ragworm. Shore crabs are most effective when peeling, or at the soft back stage. Peeler crabs are simply those in the process of shedding their hard outer carapaces. Peeling, and especially freshly shed crabs are very soft and vulnerable and highly attractive to predators. Peeling crabs ooze a very pungent orange-yellow body fluid, the smell sends many fish including smoothhound, cod and bass feeding bonkers.

Make no mistake, fishing for smoothies in waters below 50 feet deep is exhilarating. Wigan-based angler Brian Taylor can certainly testify to the incredible power and excitement generated by a big double figure hound. Brian eventually came through one helluva scrap with a what was first thought to be a tope until a massive starry hound came grudgingly to the net. Topping the scales at 25lb 6oz, the massive fish eclipsed the previous Welsh best by 2lbs and it remains the biggest smoothhound taken aboard My Way to date. 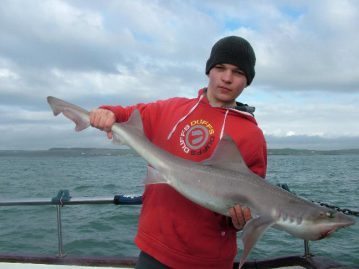 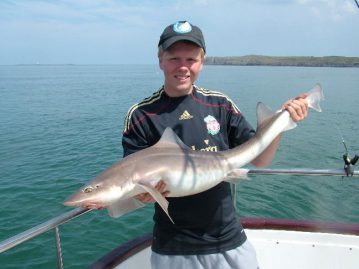 Hounds traditionally move in off Holyhead during early May, hanging around until mid July. Many of these fish are double figures, with a good proportion nudging 20lbs. During the past few years Holyhead boats have also enjoyed a brief second flurry of hounds for a month from late August into mid September. These later season fish tend towards a smaller average size of around 8lbs. 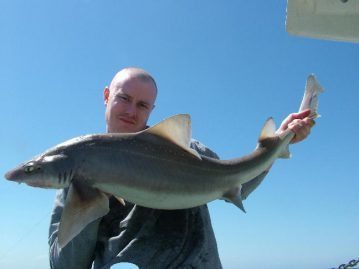 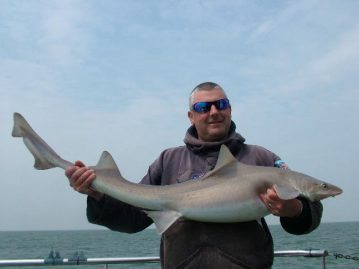 The shallow depths of water commonly associated with smoothhound fishing around the North Wales coast dictate that uptide fishing is very effective and recommended. Launching baits clear of boat noise and nailing them hard to the seabed with a suitable fixed grip lead or breakout lead is a top method and one that has accounted for the biggest proportion by far of large hounds on My Way. Smoothies are habitual pack fish that effectively track static baits and trip the uptide trap on typically shallow venues like those off the North Wales coast. 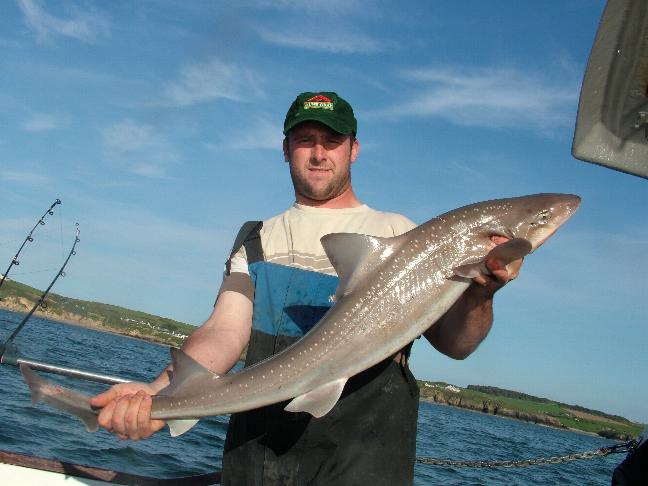 A good 9 – 10ft uptide rod with a 4 – 8oz rating from the quality Daiwa or Abu stables copes with the rigours of playing powerful smoothhounds. Likewise, reliable boat-casting reels such as the Daiwa SL30SH or, ABU 7000 models see a lot of action on my boat. Choose a main line of 20 – 25lb breaking strain. Mono is easier to cast with but more and more anglers want full throttle fishing thrills and braided line ramps sport right up. Whether mono or braid it is important to attach 40 – 50lb shock leader. This not only ensures safer casting, but it also serves to absorb any impact if the fish makes an impromptu bid for freedom, while giving the skipper something substantial to grab should the fish need extra ushering towards the waiting net. 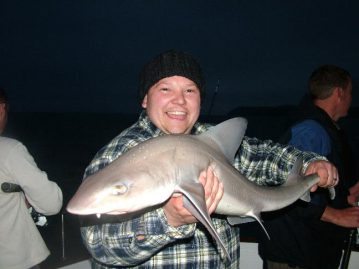 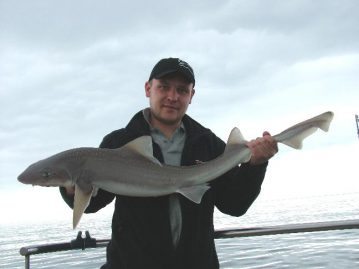 Forget mad rig variations for smoothhounds, and stick to a simple running ledger of either one or two hooks. A pennel rig can be good if using an improvised squid and rag bait, but the norm is a single hook rig for fishing with crab. Trace line should be around 5ft of 40-60lb breaking strain to a fairly wide gape hook in sizes between 2/0 and 4/0. Some anglers stagger two hooks on the bottom, baiting each with either a whole of half crab. If targeting very large smoothhounds then upgrade to size 5/0 or 6/0 hooks which are better suited to carrying such as a whole large velvet or swimmer crab. 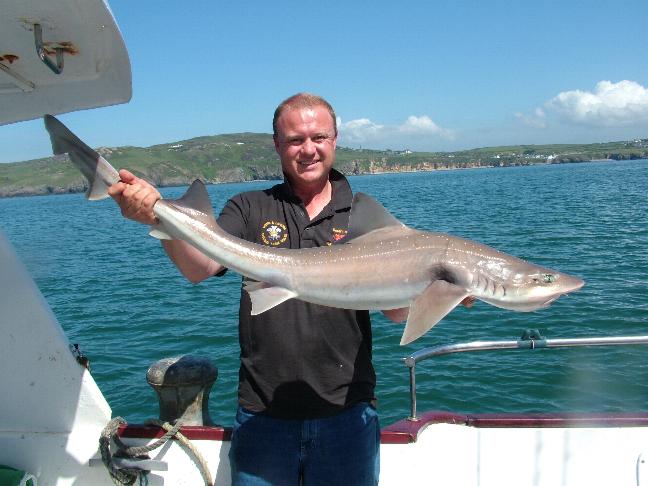 Perseverance with that bigger crab bait could be rewarded with a mighty fish in excess of 20lb.Attention needs to be drawn to the fact that the majority of double figure smoothhounds, especially those caught in May and June, are pup-bearing females. These fish should be cleanly released at the side of the boat whenever possible. If an accurate weight and photograph are required then work quickly, handling the fish with care and returning it to the water as quickly as possible with the minimum of stress.