Ronnie Campbell has been involved in common skate fishing around Oban for many years. His expertise in the targeting, capture and release of these monstrous elasmobranch species is renowned throughout the UK and Europe. I was fortunate to be among a group of anglers who headed out with Ronnie into the Firth of Lorn in late December 2017 focusing on the resident common or flapper skate.

While nothing is certain in life, a trip out aboard Laura Dawn II, an Offshore 105, with Ronnie Campbell to search of ton up common skate in the Firth of Lorne is usually a guarantee of success. The forecast for the day looked good as myself, Scott Gibson, Eddie Hughes, Stewart Walker and Robert Campbell boarded the boat from the slip in the centre of picturesque Oban at the back of eight. 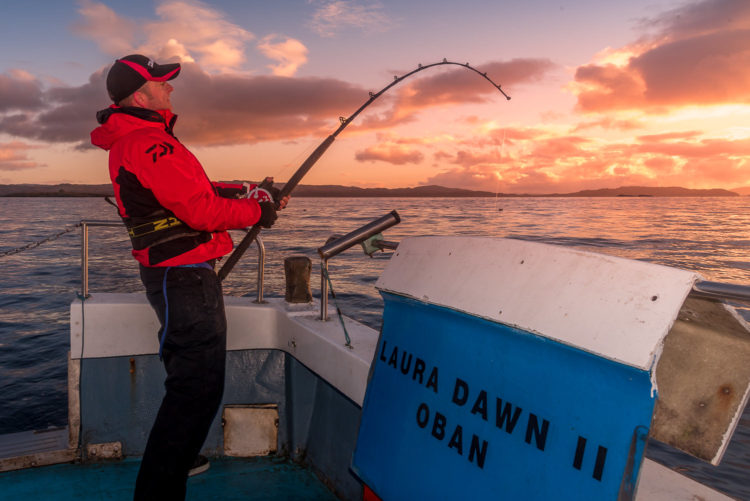 Scott hooks up at sunset

Tackle being carried was at a minimum as most of the anglers would be using the tried and tested gear that Ronnie supplies. Ronnie prefers his anglers to use 50 – 80lb class rods with plenty of power to cope with the initial part of the fight, which basically consists of a tug of war to shift the beasts off the seabed. Penn Senator reels loaded with 50 to 60lb breaking strain feature in the boat’s hire gear. These reels have proved reliable over the years and have a comparatively low retrieve rate which assists when coxing the skate towards the boat.

Bait and Tackle for Common Skate

The cool-boxes full of bait take up more room than the tackle boxes as the skate have big mouths that swallow enormous baits. Smaller baits tend to attract the attention of spurdogs and lesser spotted dogfish which make short work of the bait before the skate put in an appearance. Whiting, coalies and squid are all resilient offerings with mackerel also featuring due to their ready availability in frozen form. An elongated, strong baiting needle is handy for threading the various bait components on to the trace. 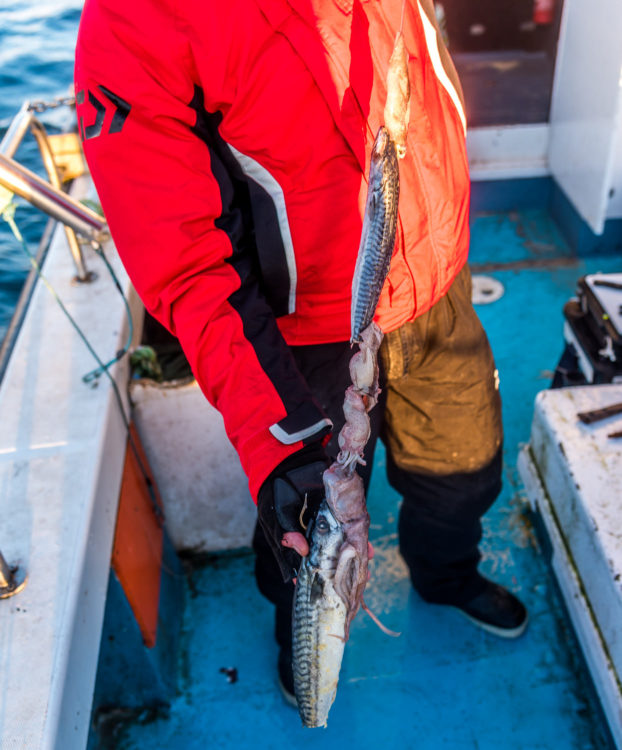 A large mackerel and squid bait

The terminal tackle used is rather simple. A three metre rubbing leader of 250lb monofilament is attached to the main line link swivel via a swivel. A wind-on leader can be used but is not necessary. At the opposite end of the leader a substantial link swivel is attached with a 20 – 25 mm round split ring affixed to the top eye of the swivel. This ring stops the plastic pipe boom from sliding down the hook length. The boom may seem large but is designed so that in the case of a break off the boom and weight slide off the leader leaving only the hook and line attached to the fish. The 12/0 to 14/0 hooks are attached to a 450 – 750 mm length of 250lb monofilament and finished with another swivel. A small section of rubber threaded on the hook after baiting helps keep the hook point exposed. The various components can be crimped to the line or knotted with a three to four turn Uni knot.

While the plastic tube boom does help prevent tangles, the angler needs to slowly lower the rig to the seabed to assist the trace to flow in the tide. Regular stops to allow the rig and bait to straighten away from the boom and weight. 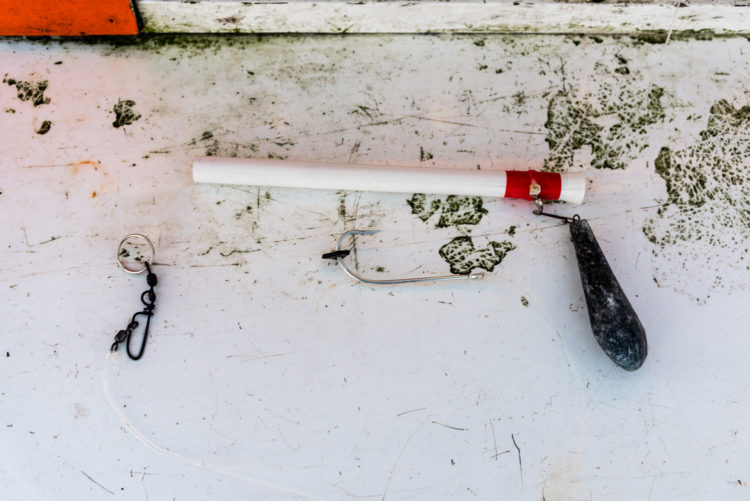 It takes a considerable time to lower the trace to the bottom in depths of up to 200 metres but patiently lowering the bait helps ensure that the rig is not a tangled mess on the seabed. Skipper Ronnie ensures that, when dropping the rigs down after a re-baiting, the angler heads to the back of the queue adjacent to the wheelhouse. Together with the anglers all using similar line diameters and weights, this reduces foul ups where angler’s lines drop on top of each other.

With six baits safely resting in the Firth deeps it wasn’t long before the tips started bouncing as the spurdogs munched on the baits. However, a switch to an octopus and whiting cocktail soon saw Scott into the first fish of the day. The skate charted out at 139lb after measuring and was quickly released after tagging.

The practice of tagging skate has been criticised in the past due to improper tagging by untrained or poorly trained captors using external tags. However, in March 2016 Ronnie became part of an elite group who have received proper training in the use of new subcutaneous tags. These passive integrated transponder tags, or PIT tags, are similar to those used to tag pet dogs and other land based animals. 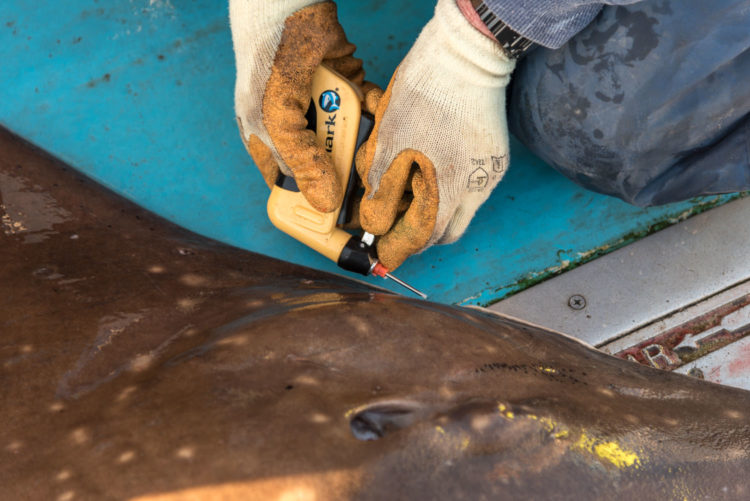 The tag is injected below the skin of the common skate with no visible marks left externally.

Unlike previous tags there is nothing left exposed on the skin to catch on underwater objects. There is also no evidence of wound sites becoming septic or otherwise deteriorating The tags are applied using a single use needle held in an implant gun. Being single use there is no need to sterilise needles before or after use. The tags are pre-loaded in the needles and the PIT tags are supplied preprogrammed with ID numbers to identify each skate.

Reading the Tags for ID

A hand held, wand reader is used to check the tag number and to see if the common skate has been tagged and recorded previously. The dimensions of the captured fish are recorded to link with the ID numbers. Like other trained taggers Ronnie always tags the skate in the same body area to ensure that the monitoring checks are carried out quickly and efficiently with minimal stress on the fish. The tagging scheme is maintained and monitored by Scottish National Heritage. SNH now have extensive records on skate in the Firth of Lorne area, using PIT tags and also from data obtained using more sophisticated archival and acoustic tags. 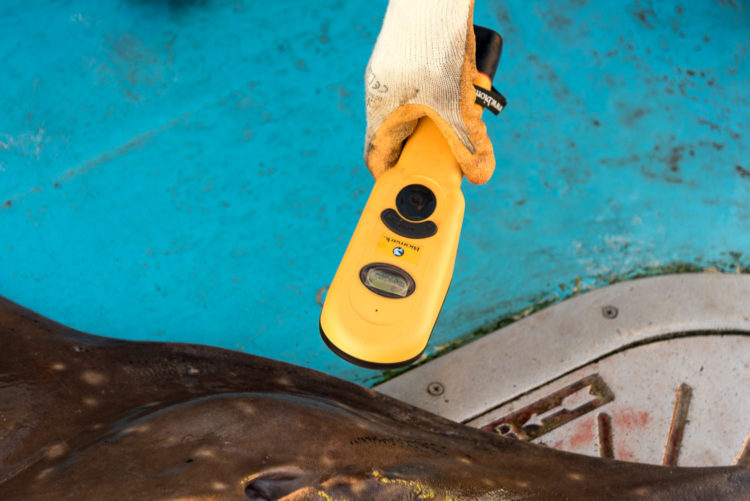 On our trip seven of the 13 common skate brought aboard had been previously tagged, one of which was a male. Seven of the skate caught on the day were females. Even to the layperson this indicates that the local skate population is in an extremely healthy condition.

In addition to the tagging scheme SNH, in conjunction with the Scottish Association for Marine Science, are hosting a common skate photo identification database.

The SAMS website allows anglers to upload images of their Scottish skate captures. From here the skate identifying marks are recorded. This simple method allows historical skate captures to be identified as well as recording skate where tagging methods are not used.

Stewart lost a fish hooked at the same time as Scott’s when the hook fell out near the surface. It was not long though before the next fish hit the deck as Eddie landed his first skate shortly after Scott boated his second. As Stewart also had his fish on at this time Ronnie had his work cut out as he danced the anglers around the deck. Intricate weaving patterns under the skipper’s guidance ensured that the skate and anglers remained tangle free. 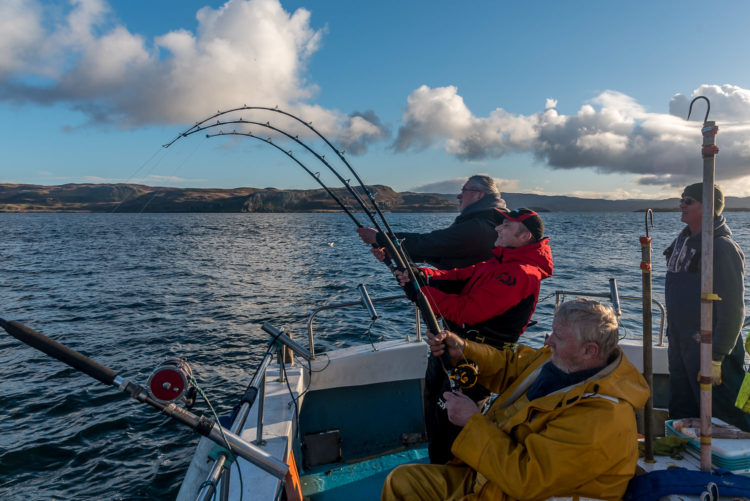 Scott again showed us how it was done as he hooked into a third fish joined at the same time by Ronnie. Unlike the rest of us wimps Ronnie landed his fish without a harness. 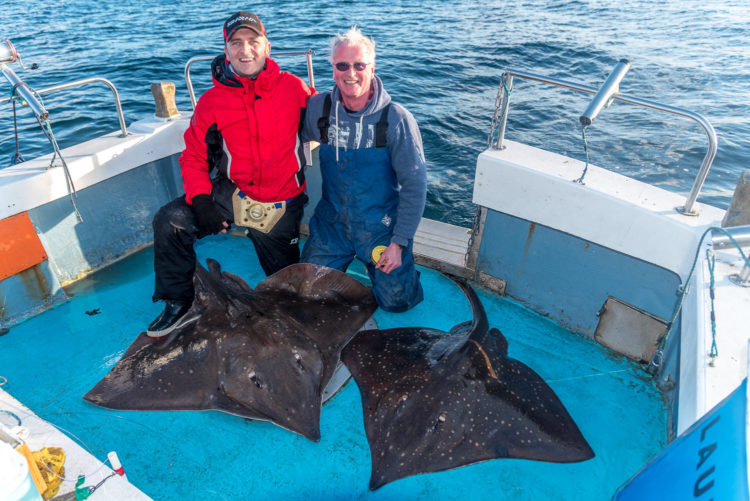 Scott and Ronnie with their fish

As Eddie and Scott synchronised another double hook up I joined the fray as a skate picked up my bait prepared by resident expert Mr Gibson. Unlike most of the others I had a lighter rod out as I was determined to test the lifting power of the Fladen Maxximus Shadow. 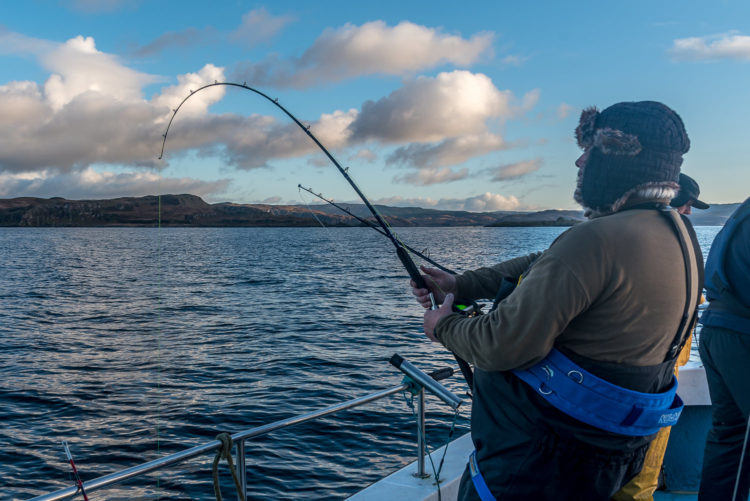 Rated at 20 – 60lb the rod performed well when fully loaded to lift the skate off the seabed. It won’t be my go to rod for big skate fishing but it proved up to the task for the 95lb fish I landed.

Eddie was ecstatic when his second fish proved to be the biggest of the day measuring out at 183lb. 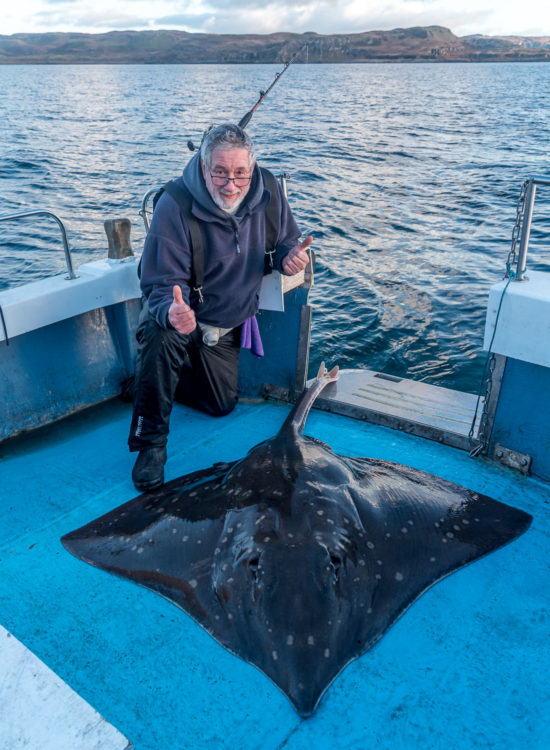 Eddie with his 183lb common skate

After a brief respite Scott landed his fifth fish of the day that was quickly followed by a 118lb fish for Robert to add to his baby 29lb previously sneaked aboard almost unnoticed. 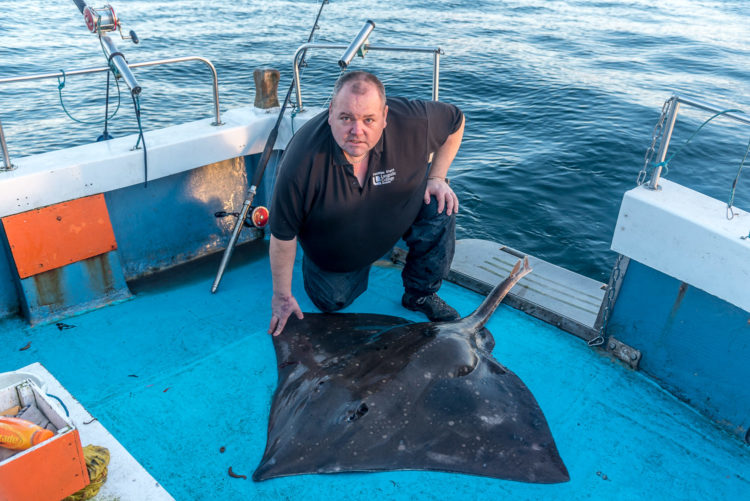 Robert with his 118lb fish

A fish of 154lb followed for Ronnie before the day was rounded off as Eddie landed the final fish of the day to a backdrop of a glorious sunset. 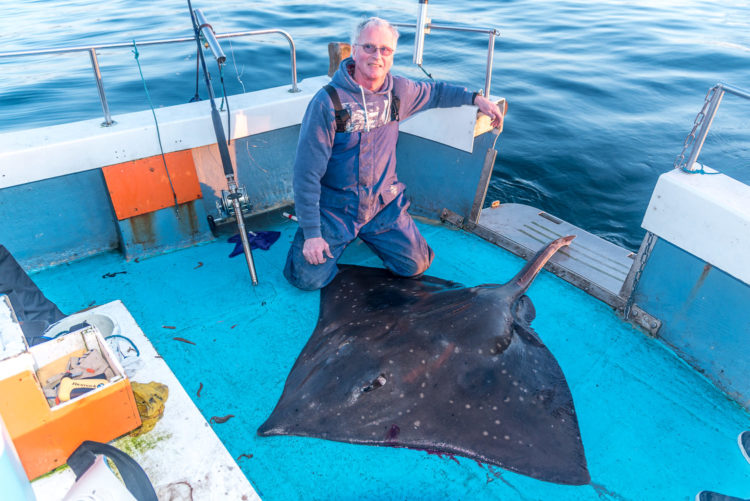 Skipper Ronnie with a 154lb skate

All told 13 common skate were landed, either tagged or previous tag details recorded, before release. A further five of the monsters were dropped, an amazing day. 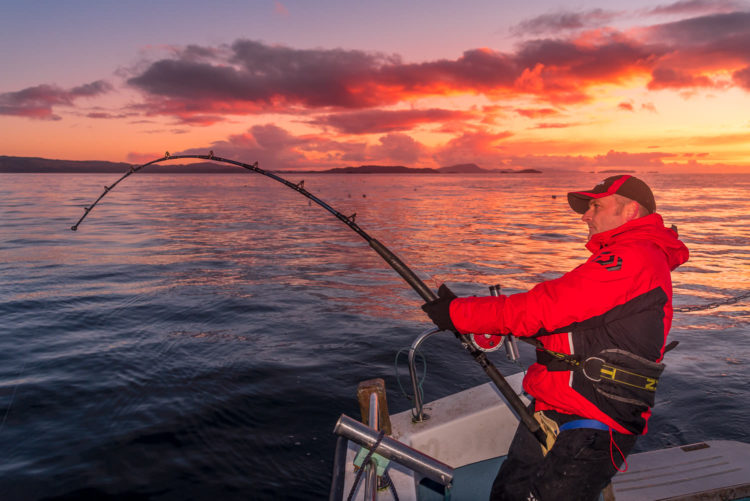 A wonderful sky to finish off a great day

Bear in mind that not so long ago certain “experts” were telling us that you could only catch skate in the height of summer. Here we were, Christmas dinner barely digested and Hogmanay still to come catching a plethora of common skate in sight of the snow covered hills on the Isle of Mull.

I can’t wait for next year.

If you fancy a day hunting down the big common skate contact Ronnie on his mobile 07721 640024, or landline 01631 750213 or alternatively drop him a line at ronniecampbell@live.co.uk you wont find a skipper who knows these fish better in European waters.