Calm Before The Weymouth Storm

The end of July had arrived and it was time for the sixth annual Parker family outing on Dave Pitman’s Atlanta out of Weymouth. The weather was sultry and overcast and the three week heat wave we had enjoyed was imminently about to break.

As a result, we had that eerie calm before the storm when the atmosphere is heavy, the clouds are dark and the sea is flat calm without a trace of a swell.

We normally use this trip to stock up on bream for a family barbecue at the start of August. Last week however, Dave put me on such a run of bream that we did not really need to worry about filling the fish box that meant we could try some different approaches and see what else might turn up. Dave had already decided that the prime objective would be to get Karan, my wife, hooked in to another conger having watched her being ‘beaten up’ by a very good fish last year.

First stop was the mussel beds to use up three quarters of an hour whilst we waited for the tide to build enough to hold us on to the wreck we were going to try for the eels. The mark did not really throw up anything of any interest except for a few pout and dogfish. Karan was clearly in conger mood when she brought up a bootlace eel on her plaice trace. 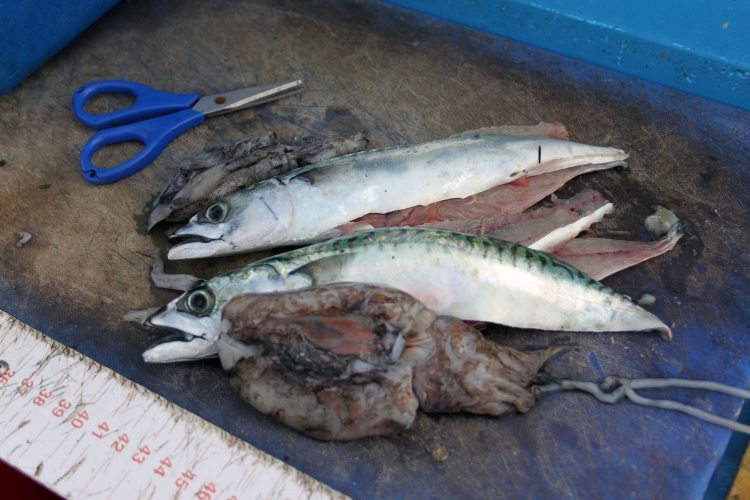 With the tide building, Dave and Dee pulled the ‘hook’ and moved us to the wreck that was just ten minutes away. I rigged Maddy and I with pollack gear which we baited with live sand eels, supplied by Dave, which we worked back in to the wreck. Pops was similarly armed while Karan was attached to a harness and some much more robust tackle. Dave had brought some whole cuttlefish and loaded Karan’s hook with one of these as well as a mackerel flapper. My other daughter, Polly, decided to repeat last year’s approach, read a book, and offer advice from the sidelines!

While Maddy, Pops and I toiled with no rewards, Karan was straight in to the action. The bite developed and then she wound down on to a fish. The rod nodded vigorously and then went solid – she was in to her fight. Dave helped her pump the rod until she got the hang of the harness and then she found that using her shoulders and legs to move the conger eel was much easier than just the arms. After a healthy fight Karan brought the eel to the back of the boat and Dave hoisted it aboard for the trophy shot – mission accomplished. 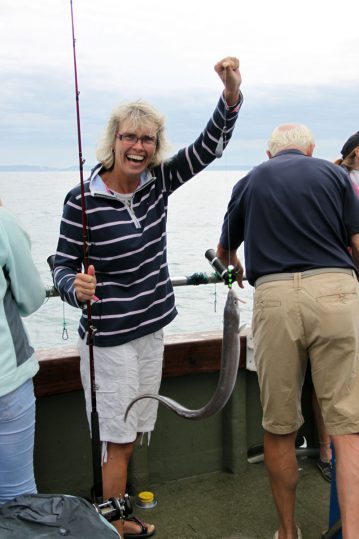 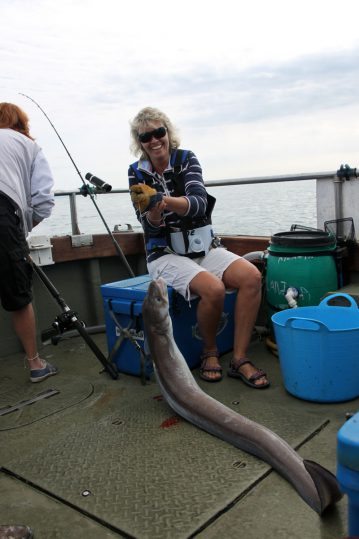 With nothing showing to the sandeels, I sneaked a flapper down myself. I did not have to wait long and soon had a conger to the gunwales. As mine was a good 10lbs smaller than Karan’s we did not bother with the photo and the fish was T-barred off to return to the depths and compare notes with the one Karan had released 10 minutes earlier.

As the tide dropped away, again Dave repositioned us on the wreck but no more eels and no other fish showed. It was time to move again and we headed for the Lulworth Banks. The plan was to anchor over sand, chase some gurnards, and then pick up some bream when we swung over the ledges. The gurnards did not show however and pout, poor cod and lesser-spotted dogs were a pest. I did manage a very large scad and a couple of stray mackerel pinched our baits.

As soon as we edged towards the ledge, however I found a bream. We thought they would come on strong but it was not to be – were they scared of something? 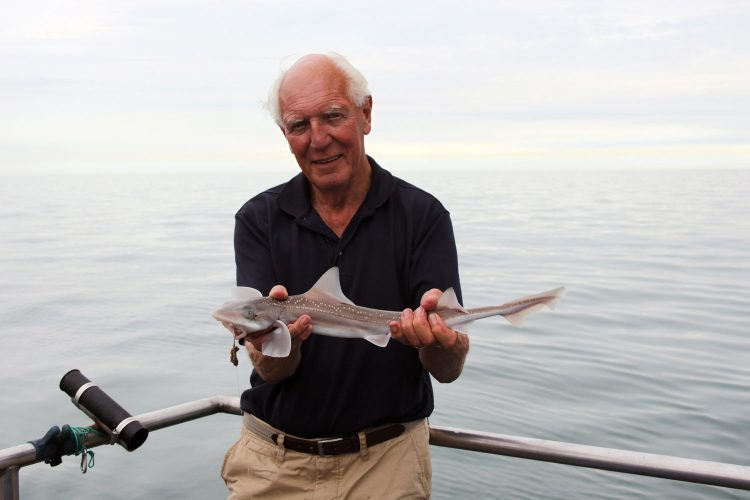 Pops managed a small smoothhound that was beautifully spotted and Karan managed to dodge the bait robbers to add a bream to our haul for the day.

Right about now Maddy was just starting to get a bit frustrated. Every bait that she put down was pinched by a pout or produced a doggy. Then she had a much more interesting bite. We all assumed a bream but no – the result was a cracking cuckoo wrasse. As big a cuckoo as I think I have seen. 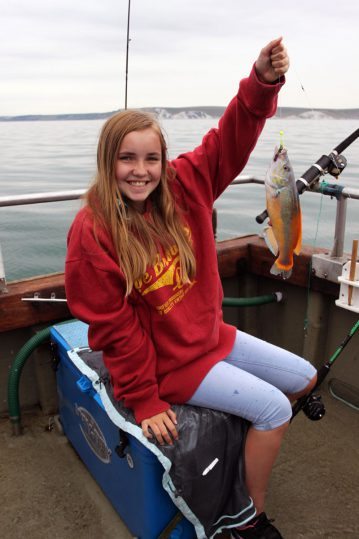 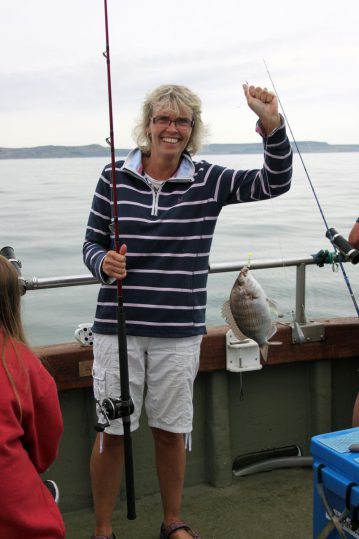 Pops had shown that he has a knack for finding something unusual, so we should not have been surprised when his worm bait produced the smallest conger eel anyone has ever seen.

They reckon that to be a decent golfer you have to be able to imagine the shot you are about to hit before you swing the club. I hate to think what Pops was imagining when he decided to try a live sand eel fished hard to the bottom on a plaice rig but, as they say, don’t knock it until you’ve tried it. No sooner had he put his rod down and he had a bite. So fierce was the bite that he was very lucky the skipper was on hand to grab the rod before it disappeared over the side. A vigorous battle ensued and we were all amazed to see the result – a tope of around 10lbs. Now that made his day. 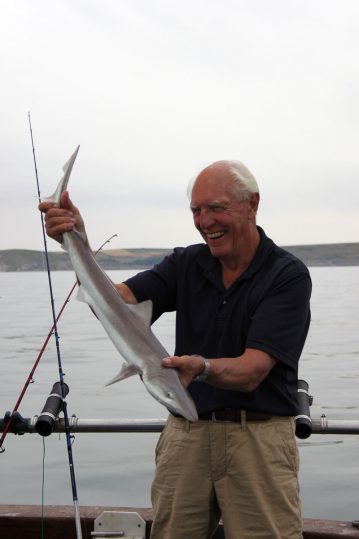 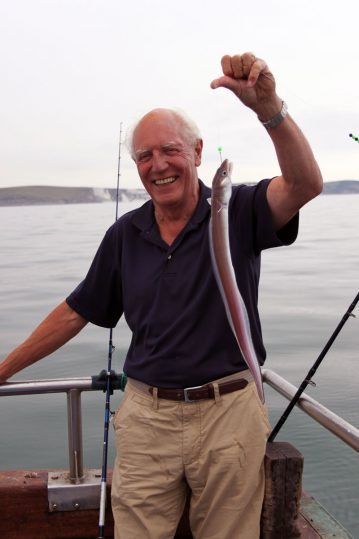 By now, Maddy was also running hot and her new Awa Shima Ugly Batter was getting a fine work out, no more so than when she brought her own tope to the net. I don’t think she could quite believe she had caught it.

If Maddy was running hot then Pops was on fire and he added another bream to the box. Maddy would not be outdone and followed up with one of her own. This was a little small so went back and Dave managed the only other bream of the day that he kindly donated to the Barbecue fund. 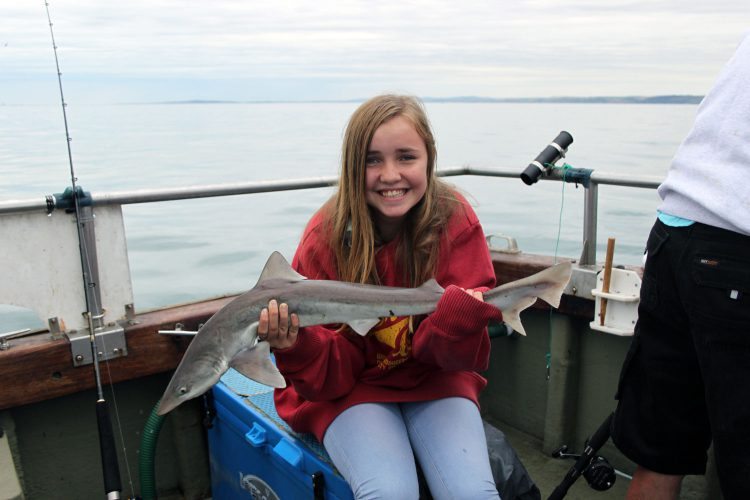 With the day wearing on, I was getting worried that my conger and my bream were going to be the high spots of my day and that all this exotic high-octane sport the rest of the family were getting would pass me by. A rattling bite came on my bream rig and I wound down in to what I hoped would be a decent bream. It was not and my 6lb rod bent double as the reel span under the pressure of a strong run. It had to be another tope and with the image of a 20lb snood and size 4 hooks in my mind I backed off the drag a touch. After a decent scrap, I had the fish to the net and my day was made.

I was fortunate as the tope bit the snood off in the net. I hastily retied grabbing an even smaller size 6 Sakuma Manta from my pocket and went back down in search of the elusive bream and gurnards. Another rattling bite and I thought I had found them. Again, I wound down and again the fish took off. Another tope and this one went crazy on the surface running three times from the net – cracking fun. 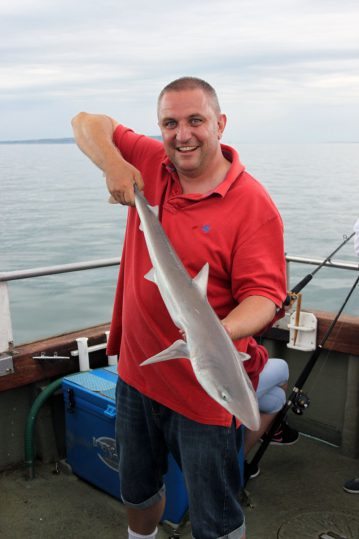 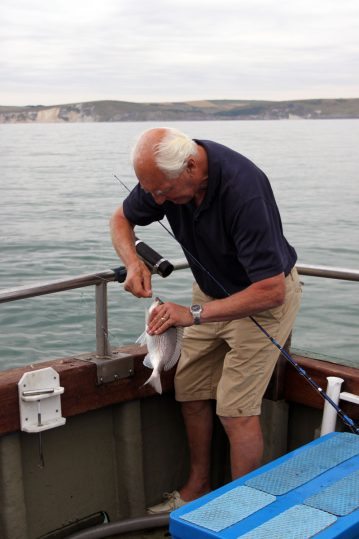 It was clear what was scaring the bream. Pops had bream hooks straightened by three more tope and Maddy was broken off by what we suspect was a very good fish indeed.

As the day drew towards 3pm, the ominous clouds that had surrounded us all day closed in. A short and not too sharp shower passed over us followed by a very stiff breeze. With the boat being pushed off the mark, the fishing slowed and we decided to call time after a great day on the water. I packed up the rods, we stowed the gear just in time as half way back the heavens opened, and the storm was upon us. As we had stayed in Weymouth Bay, we avoided any difficult sea conditions and were back on the mooring in no time at all. 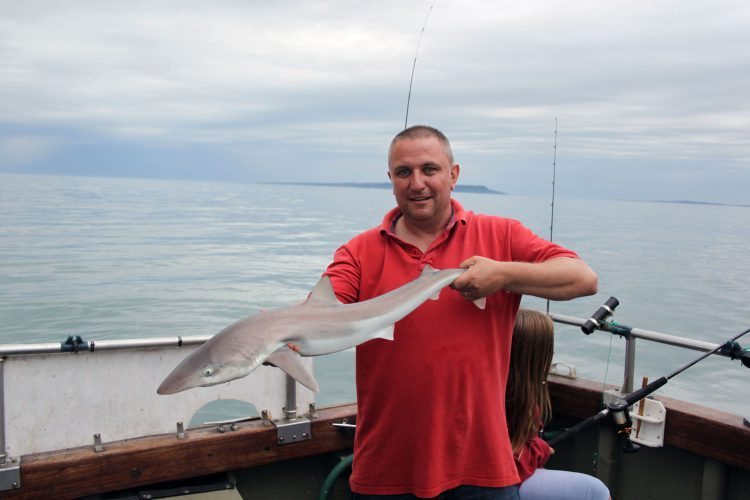 It is difficult to imagine that on the same boat from the same port you can enjoy two such different days of sport just one week apart but that is the beauty of the variety of ground off the Dorset Coast. Once again, Dave had conjured up an excellent day when conditions could have been tough and we are already looking forward to next year’s trip. Before that though there are the August holidays and hopefully more Dorset and South Devon action.

I managed to grab some video of Karan’s battle with the conger that you can see below.