Kimberley had been planning this trip from Norfolk since April this year and it was with growing excitement that she finally packed her gear for a September weekend in Dorset. She met up with Adele and John Smith in Ipswich and early on the Friday morning they set off with high hopes for fishing Chesil Beach.

Chesil Beach or Bank is a shingle beach stretching 18 miles along the coast Weymouth between Abbotsbury in the west and Portland to the east. The pebble bank reaches heights of up to 15 metres and provides protection for the Fleet Lagoon on the landward side for most of its length. The shifting shingle as you walk to or trudge home from your fishing base makes it one of the most strength sapping venues in the UK. However, the quality of the fishing and the number of species to target makes the effort well worthwhile. 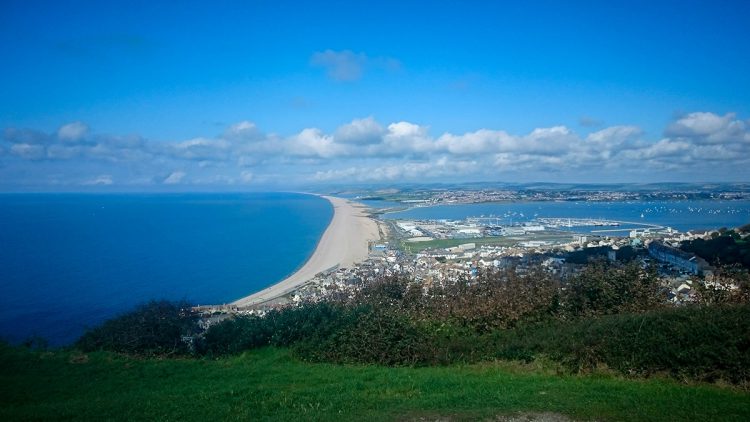 Once at Pebble Bank Caravan Site, which overlooks the Fleet and Chesil, we settled into our home for the weekend and set about organising our boxes with some lighter stuff to start with then progressing to heavier rigs like pulley pennels and two hook loop traces hopefully for the bigger fish after dark. We brought with us a selection of bait including blow lug, ragworm, black lug, peeler crab and squid, we were hopeful of picking up some fresh mackerel off the beach.

That evening we hit the first beach at Abbotsbury situated at the western end of the bank. With lots of reports that codling were here in numbers it was looking like a busy session ahead of us. As expected the beach was packed due to the reports of cod so we found a space to the left near the Dragons Teeth, which are old concrete sea defences. 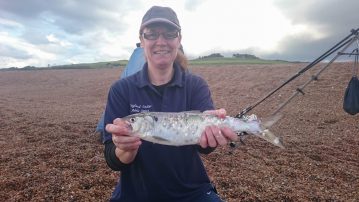 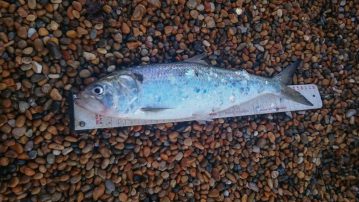 To start with the fishing was a little slow as I opted for longer, lighter rigs with size 4’s, and soon enough Adele managed to find a 44cm shad which after a quick photo was safely returned being a protected species. As the dusk approached the bites started in earnest as whiting and poor cod, which weren’t picky when it came to what bait was on the end, rattled our rod tips. As it got dark John pulled in a smoothhound and a dogfish followed not long after that. We also found that glowing 6mm Gemini pop-up floating beads were particularly effective in bringing fish to the hook. Around 10pm I baited up a pulley dropper with several ragworm whipped into a nice sausage to which I then added a couple of drops of BioEdge Sandworm Potion. Soon enough a slack liner resulted in a plump 3lb 10oz codling. So I baited up again with the ragworm and potion then sent it out. After a quick picture with my codling I noticed I had another bite and pulled in my first ever conger, only a baby but still a really pleasing addition to my species list. So I went for the hat-trick and baited up and this time with blacks and the Sandworm Potion which was my last cast as it was getting late. Nothing special on the end this time however I did have two greedy little pouting on a single pennel rig which is always funny to see. 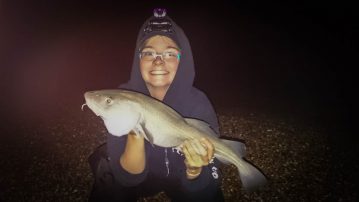 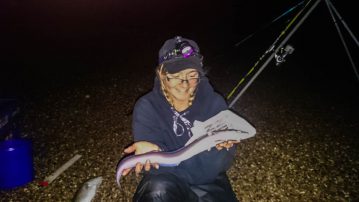 Saturday morning bright and early headed to the Masonic mark at the end of the causeway to the Isle of Portland and found a calmer, clearer sea. We were hopeful that there would be some sport to be had on lighter line and floats for garfish and mackerel. Unfortunately the fish didn’t want to play ball and we only managed one garfish between us on a float using a sliver of mackerel as bait. So back to the caravan for a cooked breakfast and a tidy up of the the gear.

We headed out again later that afternoon to what was a quieter beach than the day before with more room to work. It was slow again until dusk when out came the floating glow beads which proved effective in attracting scad and black bream, a solitary mackerel fell to feathers. Not much happened until darkness took a proper hold and the pout and whiting put in an appearance. I looked up at my rod to see it bent round to the right, picking it up it was a fighter on the end soon up came a beautiful starry smoothie which on my long, continental rod provided great sport. The fishing died off and with no more codling showing up we called it a night. 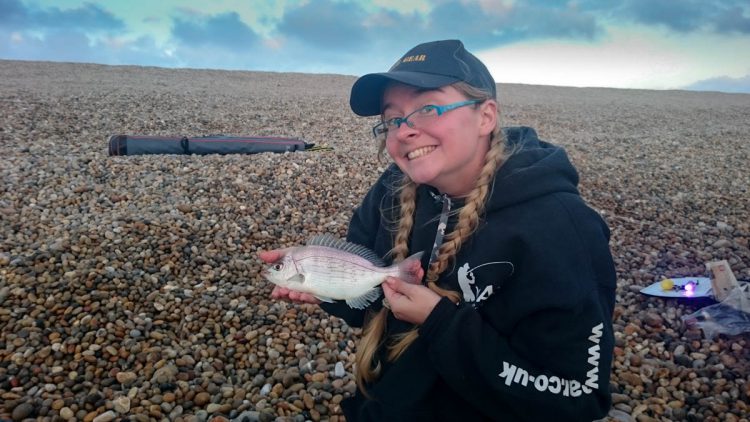 Sunday morning we took a break and went for a touristy trip to look around Portland. It was really pretty and the surrounding water was extremely clear.

That evening we went to Ferry Bridge at the eastern end of the beach and met up with Becky Adams and Graham Woods. Fishing was slow again until dusk then it all kicked off again with some bream showing and scad. Then Becky came over with a big grin on her face and a red mullet in her hand. Once returned it was clear Adele was then in to something special and she after a spirited fight she landed a cracking tub gurnard of 40cm. I returned to my rod to see I had a little bite which resulted in my first ever black bream. What a fight from such a tiny little fish, I hope some day that I manage to connect with a larger one of these lovely fish. Then John had a steady run of the bream until it was dark then that was it until my last cast and another bream brought a brilliant weekend on a beautiful venue happily to a close. 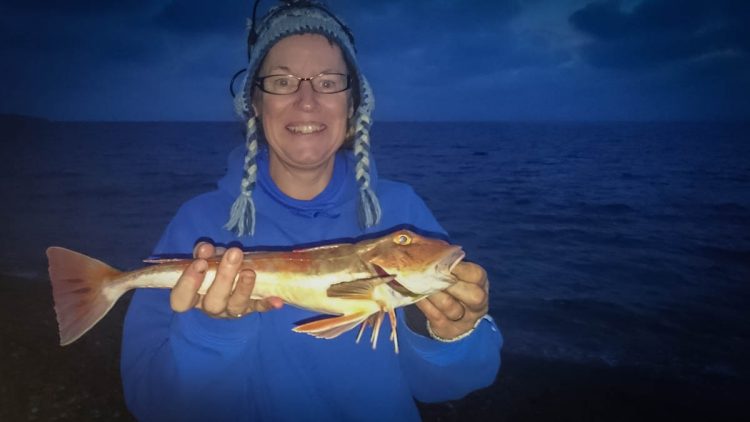 Thank you Adele and John for making it a great weekend. The total number of species between the three of us was 14, and personally I landed 11 of which four were new species for me. 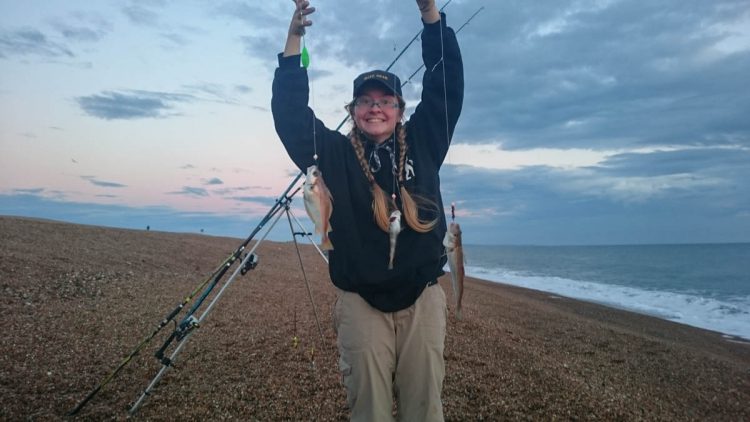