Winter need not to signal an end to kayak fishing says Neil Turnbull. Sheltered and scenic Loch Etive is a prime example of a venue to beat the New Year blues according to Planet Sea Fishing’s resident yakker. 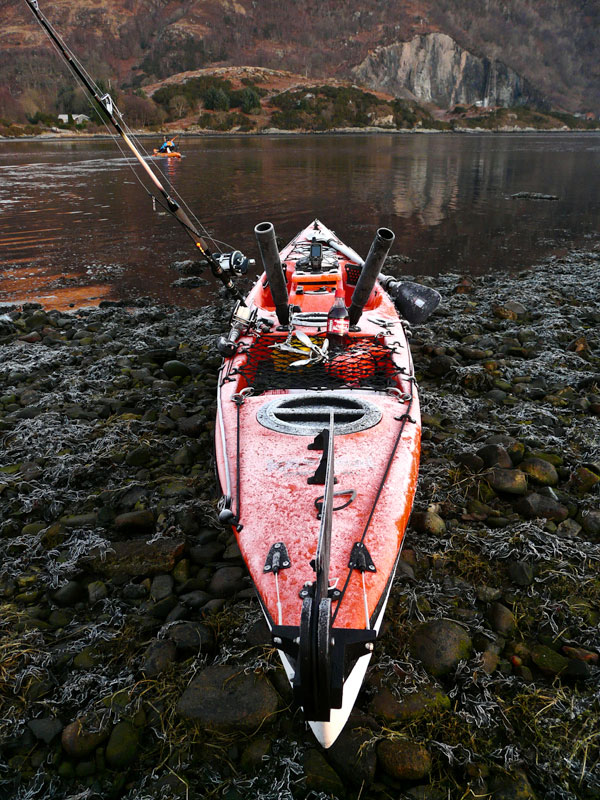 The onset of winter bodes ill for many kayakers who depressingly hang up their paddles and twiddle thumbs waiting for better weather. But if properly equipped, and keen enough to brave the elements, the colder months need not signal an abrupt halt to our kayak activity. Venues like some of Scotland’s many sheltered sea lochs brim with winter opportunity, and though notoriously fickle in nature, they can produce fantastic sport.

Hordes of ravenous spurdog used to frequent many of these lochs during winter, but that’s ancient history and today we have to be content with lesser numbers and far smaller fish generally. Specifically commercial long-liners have detrimentally effected these once healthy spur’ populations. However, ongoing pressure from the likes of the Scottish Sea Anglers Conservation Network is succeeding in forcing positive actions towards much needed fish regeneration. In many ways idyllic Loch Etive on Scotland’s west coast is the perfect example of a winter kayak venue. A deep fjordic glacial basin, it begins life at the foot of Glen Etive and quietly winds through some of Scotland’s most spectacular scenery; progressing southwards until it turns a more westerly track at Taynuilt. A 20-mile journey ends in marriage with the open sea at the gaping Firth of Lorne.

A cauldron collision of racing rents and constantly collapsing whirlpools, the fiercely tidal loch-mouth is a sight to behold. Beneath the Connel road bridge an unseen rock sill acts as a natural barrier, interfering with the tides and birthing over-falls, boiling swirls, and, at times, a pure white water maelstrom known as the ‘Falls of Lora’… don’t even consider fishing this part of the loch in a kayak.

Etive has become a favourite with shore and boat anglers alike. Ease of access coupled with the loch’s sheltered nature means you can get afloat on days when the open sea would often be impossible. When the winds whirr strong enough however, the funnelling effect of the mountains can channel wind and weather, magnifying the effect and making this a very inhospitable place indeed. It would be sheerest folly to venture out in Etive or anywhere without studying and heeding the weather charts. 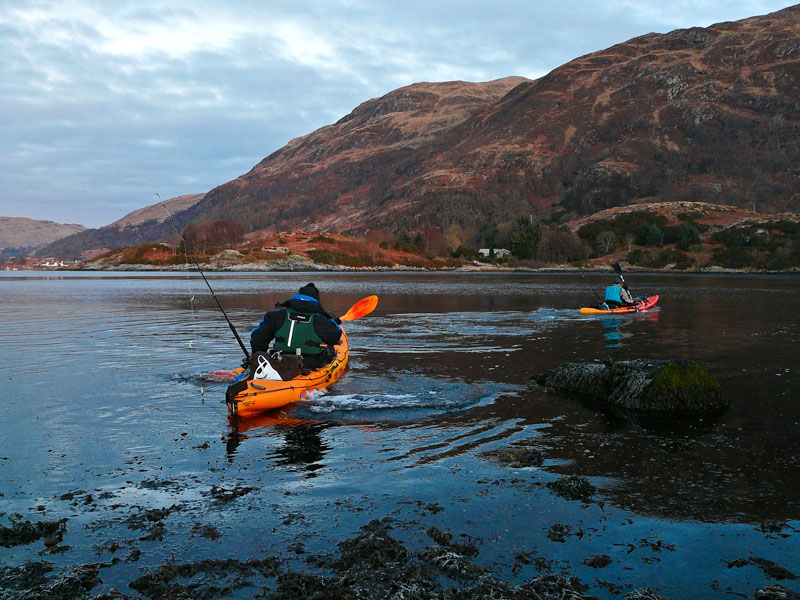 Fishing efforts are concentrated around the main launching area at Taynuilt. One of the benefits of kayak angling is being able to launch wherever there’s access to the foreshore. Loch Etive offers various launching options, with the old Jetty at Taynuilt providing the best starting point for a day afloat. Easily accessible from the main A85, Taynuilt nestles on the south side of the loch, almost in the shadow of towering Ben Cruachan. There’s ample parking at the launch site, and due to Taynuilt’s mid-loch location, there’s the possibility of setting off in either direction, using the tide to your advantage.

Because of the significant natural barrier at the mouth of the loch, tidal range is significantly less than that of the adjoining Firth of Lorne; this alleviates the need for accurate tidal planning as flows are minimal. The only warning is to be aware of the shallow section in the narrows between the Jetty at Taynuilt and Bonawe Quarry where the tide is funnelled through a narrow, shallow pass and can reach speeds in access of 2.5 knots. The surface here can become very confused, a situation often exacerbated when the wind comes against the tide.

The winter species menu Etive offers is impressive, with up to 10 in a day not uncommon. The loch features a very deep basin, with depths in some areas in excess of 500 feet. These deeper marks tend to lie further up the loch, with the basin becoming progressively shallower as you head towards the narrows at Connel. Because of the depth, make sure reels are loaded with enough braid to plumb the abyss! I rarely fish much deeper than 250 feet… hard work, and a physical nightmare to haul an anchor up through, but needs must. 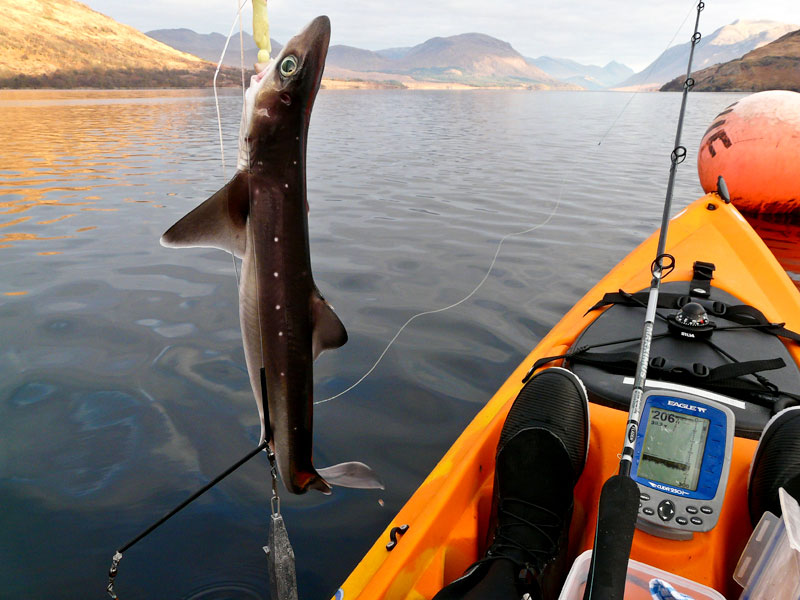 Simple ‘one up’ rigs baited with squid and mackerel suffice in the deep water. Any strong wire ‘ J ‘ hook will cope, but circle hooks are becoming increasingly popular. A feisty spurdog thrashing about on your lap is the last thing you want while in your kayak… that’s not good for the fish or the integrity of your dry suit. Unlike with traditional ‘J’ hooks, circle-hooked fish are normally lip-hooked, which facilitates quick and efficient T-bar release at the side. Snoods should be strong and short, with typically 80 – 120lb mono preferred to counter sharp spurdog teeth. If you connect with a decent spurdog, show them respect. Careful handling is recommended, both to protect the fish and to prevent it from causing injury to you.

These deeper soft-bottom marks also produce thornback ray and whiting. The thornbacks run to double figures, although 4 – 6lb is more the norm, while plague numbers of small whiting can prove a pest at times.

Conger and ling also feature, and there’s always the outside chance of a hake encounter. The 25lb 12oz British record hake came out of Etive in 1997.

Anchoring is required to exploit these marks to their full potential. There is a hard way and an easy way to achieve this: either set the anchor in the mud some 200 plus feet below and later confront the torture of retrieving it, or take the easy way out by tying to a mooring or pot marker buoy. Search out a few potential moorings or ‘anchor’ spots, and paddle past them with your sounder switched on. Select one positioned above a feature such as the side of a shelf or a depression. 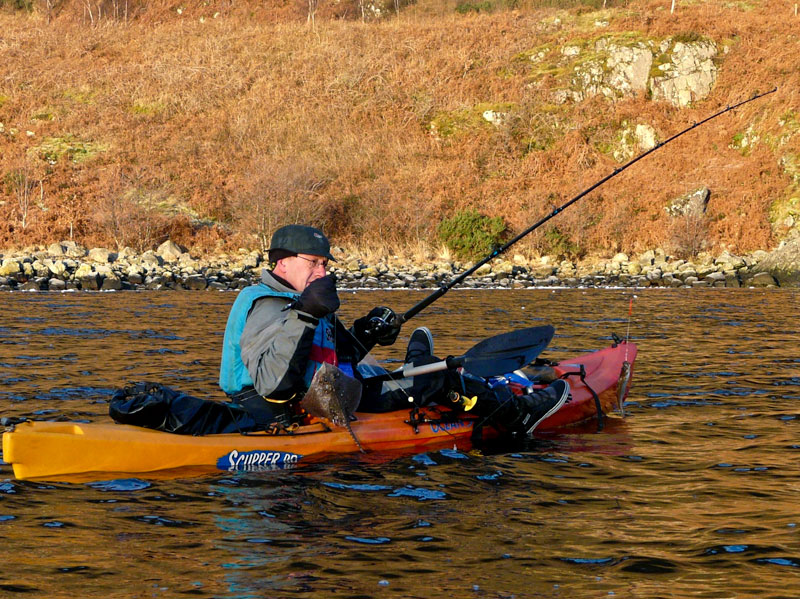 The rougher, shallower perimeters of the loch tend to produce a better species mixture, which would include cod, poor cod, whiting, gurnard, pollack, coalfish, gobies and pouting. Simple paternosters rigs, Hokkai feathers or similar with worm or fish baits are ideal for bottom fishing, while various lures can be retrieved for pollack. These areas can be fished on a gentle drift without the need to anchor.

The correct attire on your kayak is vital in winter, and your day on Etive will be made more pleasurable if you’re properly equipped. It’s important to stay warm and being dry goes a long way towards achieving this. A good dry suit, a warm waterproof hat, waterproof paddling gloves and decent pair of kayak boots are recommended. Your PFD will also give you an extra bit of insulation if worn correctly. Undergarments are also very important.

Remember dry suits have very few thermal properties, so try and build up a layered system underneath that will serve to keep you warm and also serve to wick any sweat away from your skin. Getting the level of clothing correct is a bit of a balancing act. Too much clothing and your movements become encumbered, often leading to overheating when paddling. Equally, you don’t want to be shivering to death while fishing because you are under clothed.

At this time of year keep your trips short and don’t try and paddle too far. Take regular breaks and try not to break sweat… this will just cool you down when you stop. One of the benefits of kayaking in Etive is that you can haul out almost anywhere for a pit stop. I keep my stove and kettle in the front hatch, and a quick leg stretch ashore usually results in a swift warming brew up. 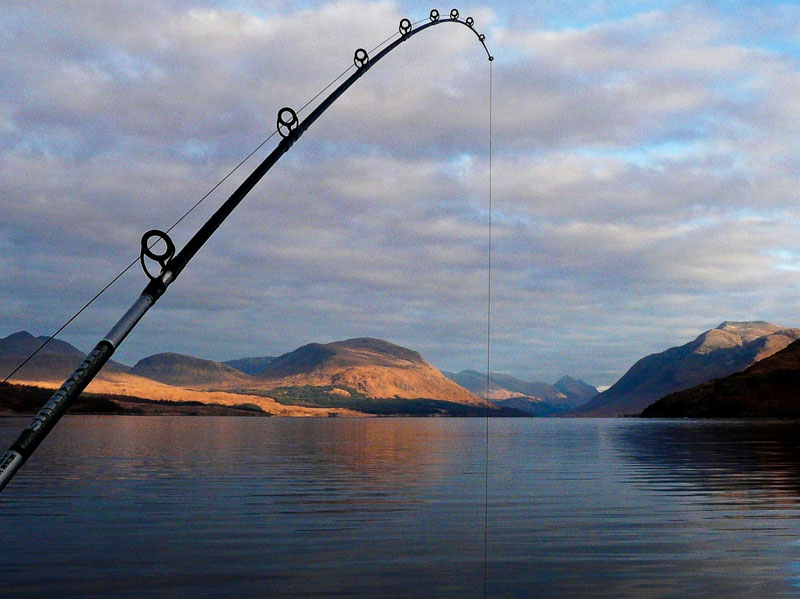 I find the lure of these sea lochs sometimes too great to resist, particularly during winter when kayaking elsewhere is not possible. Etive in particular is one of those magical places where time seems to stand still and the sight of your misting breath is joyous. It’s the best kind of therapy, and even a poor day’s fishing is enjoyable in the winter cold, amidst Argyll’s mountain and glen magnificence.