Isle of Wight shore angler Matt Brook works up a sweat as he and Danny Barsdell get off the couch and go fishing for hard-fighting Solent smoothhounds.

With the smoothhound season in full swing, it was high time I dragged my carcass off the sofa and grabbed a slice of the exciting shore fishing action that others were enjoying around the Isle of Wight. A few probing phone calls to those in the know confirmed the Solent hounds were present in good numbers. So after acquiring a bucketful of prime crab, I made for the beach eager to blow away some mental cobwebs.

A strong south-easterly wind meant fishing buddy, Danny Barsdell and I needed to select a mark affording us a degree of shelter. After batting various beach options back and forth, we decided to head for ‘Hamstead’, a well known north west Solent mark with a solid reputation for producing smoothies.

Generally speaking, the Solent is well populated with hungry smoothhounds at this time of year and the fishing is good. This particular mark is not renowned for lots of big hounds, with the average stamp running 4 – 7 pounds, but a double-figure fish is always a possibility. Although they were not on our radar this time, there’s also a chance of bass here, with Dexter wedges or various plugs accounting for a good share in the late daylight hours. 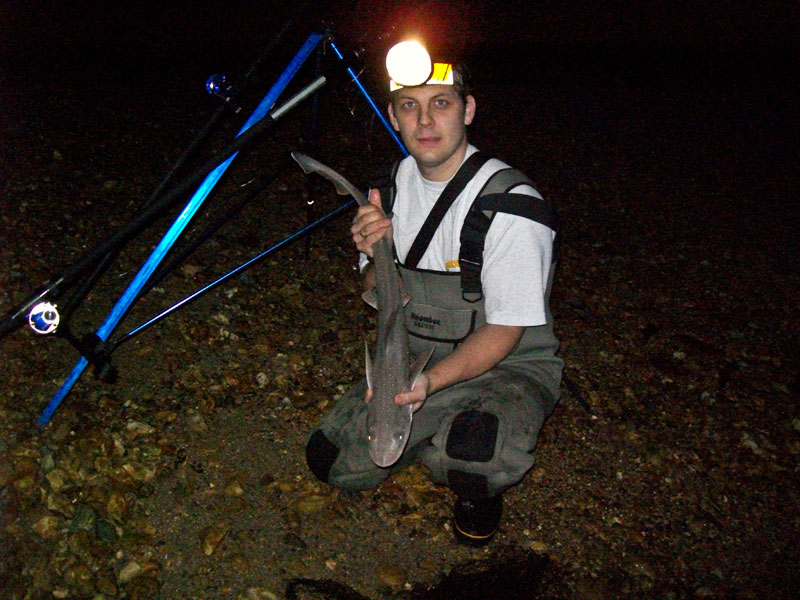 It took a brisk walk of 20 minutes to reach our spot. We arrived at 8.30pm: giving us enough time to set up in the faltering daylight for what we hoped would be a good session in darkness. Five other anglers had the same idea as us and were hard at work organising their fishing bases at various points along the beach.

Conditions were perfect, and Danny and I set up brimming excitement only mad anglers and expectant children fully understand. We both assembled two rods to begin with. As seasoned smoothie hands however, we were well aware that when the fish move in it can be impossible to use both rods effectively, with more missed runs than connected ones for those that persist. 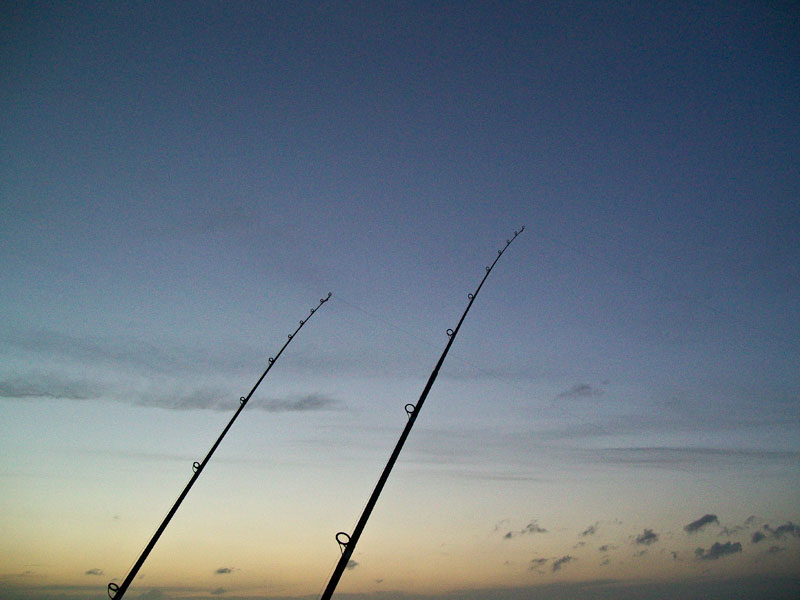 We would be fishing the ebb tide, which can be strong and difficult to manage. Mindful of this, a couple of emergency 7oz grip-leads to cope with the tide at its most savage are carried.

Smoothhounds go some on beach tackle and I rate them as one hardest-fighting fish in our seas. For hounds, I use clipped down pennel rigs with size 2/0 Sakuma 545 Extra hooks on a 30lb amnesia snood to address the rough skin which can abruptly end a fight if traces are built too light.

A perfect fist-sized peeler was securely bound in place with fine elastic before casting. Common peeler crab is deadly for these sleek but extremely powerful lesser sharks, but only until the invasion of peeling spider crabs that invade the waters around the Isle of Wight annually. When the mass spiders move in and moult these same fish want to eat little else. As yet, the spider invasion had not occurred and common shore peeler was top of the menu.

We watched our rods in anticipation as the sun slowly dipped below the horizon. Before long my Carbon Metal bounced forward in the rest and a billowing swathe of slack line followed. Up like a shot, I grabbed the rod and quickly wound down, pausing to feel the weight of the fish. It moved off and I instinctively struck the hook home. The resulting powerful run, which effortlessly stripped line against the reel drag, was typical of a surprised smoothhound. 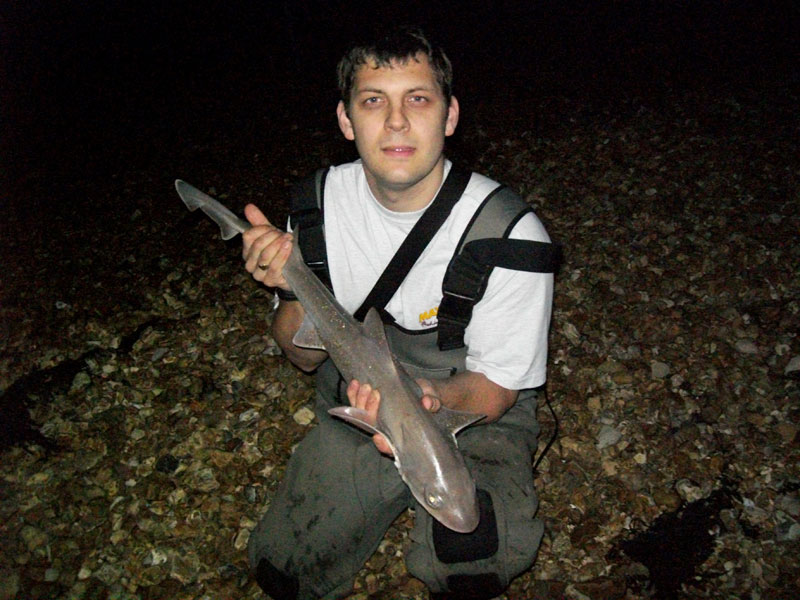 It is most important to have your drag set correctly when targeting hounds, as even a 3lb fish can be a handful. The fish made several wrenching bids for freedom on the way to the beach. Line tentatively won was far less candidly stolen away before tiredness on the fish’s part gave me the upper hand.

I waded out several steps, held the rod high in one hand, and tailed the splashing hound with the other. It wasn’t a monster at 5lb 5oz, but a good start nonetheless and a positive indicator of a good night ahead…I hoped.

I re-baited with another juicy crab and pushed a big peeled crab leg over hook-point (a good tip), before launching as far as possible out in to the darkness. I tend to use this ‘long’ tactic to begin with, shortening my casts further into the session as the fish home in on the baits and move closer to the shore.

With one fish notched, I decided to reel in my SRE and retire it to the rod bag in order to centre my attentions on one rod only. Hounds move in packs, and three or four fish often come in quick succession. I pulled second identical rig from the wallet and baited so that I could switch quickly switch rigs and maximise actual fishing time. 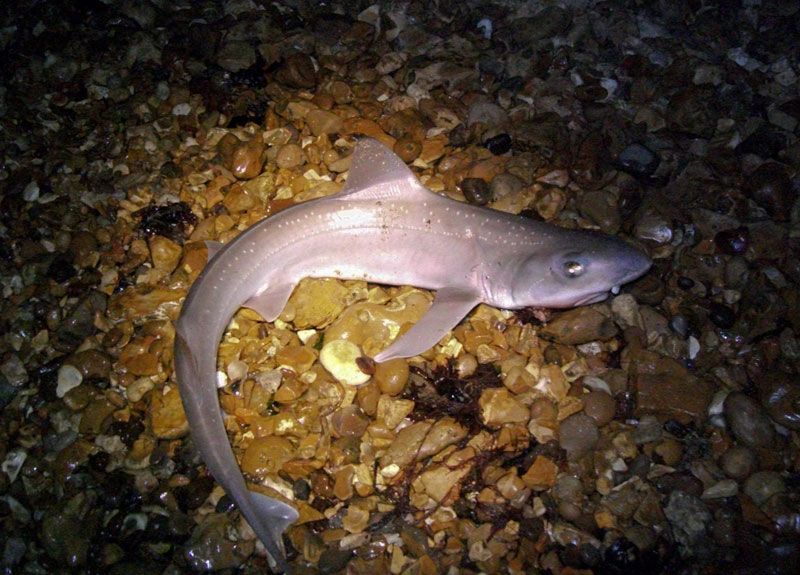 It wasn’t long before the other trace was needed. Another tearing run signalled the start of a hectic spell of action. A hound of 4lb resulted and was followed by five similarly proportioned fish on consecutive casts.

A shout of “FISH” came from my right. Danny, who’d been having a quiet time of it, was wrestling his way to his first fish of the night, a smoothhound of around 3lb 8oz.

After that explosive period the fishing went right off the boil, with only one more small smoothhound for me, and a dogfish for Danny in two hours.

As low water approached, I reverted to smacking another big bait out long. I had just started to peel down another crab when a strong pull on the rod tip saw me drop everything. I had the rod in my sticky hands a moment later, and dropped it low while tightening down, willing the fish to betray itself. It raced off like a missile, pressing its powerful tail and streamlined shape into full ballistic service.

This was a better fish. Could it be a double? It stayed deep all the way in – a sure sign of a better specimen. 10 metres from the shore I got first glimpse of a good fish, but one short of the magic 10lb mark. I successfully landed the thrashing hound and took a plume of spray to the face for my cheek. Unhooked, I gently placed it in the weigh sling. The scales settled at 7lb 11oz. 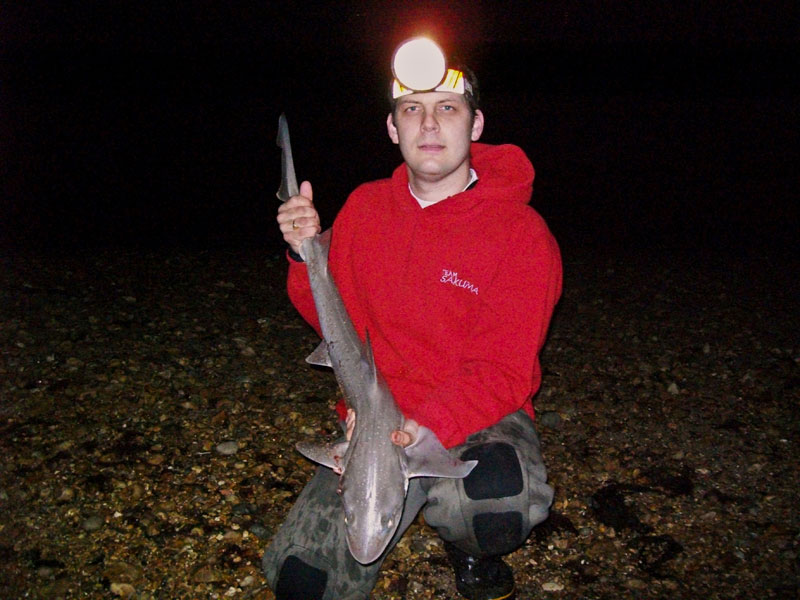 Job done, I slipped the fish back and yelled over to Danny that I was calling it a night. Alas I didn’t get my wished for double-figure fish, but those I released were ample reward. And, of course, there’s always next time.