Light tackle pioneer, lure fishing maestro and boundary-pushing kayak fisherman, Keith White, explains the roots of HRF and LRF from a British perspective, and introduces readers to the fantastically rewarding world of extreme kayak fishing in the sea.

Lure fishing is a constant pursuit of better, more efficient methods and new artificial baits that push boundaries and successfully smash straight through nature’s barriers, and others unwittingly cemented over generations. As the ever-growing army of UK sea fishing lure junkies marches steadily forward, the legacy of where we find ourselves at this point in time is one of metaphoric minefields successfully negotiated, while yet more burgeoning choices promise to underpin pacey future evolutions. 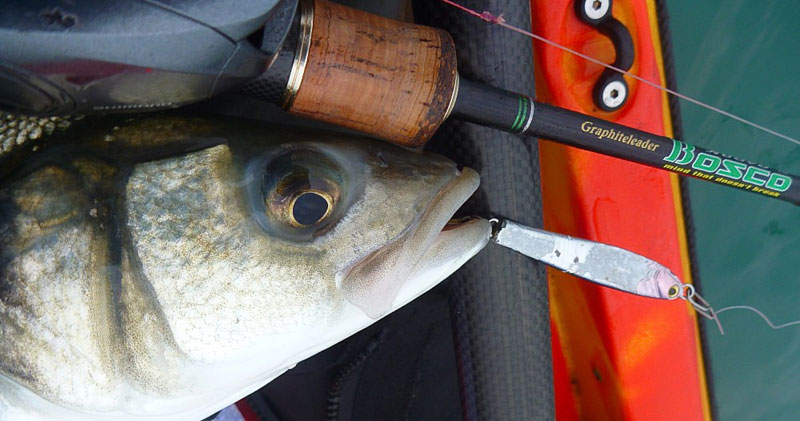 Many fraught years have passed since we first attempted to use kayaks in the way that we do now. Some 15 years ago SOT (Sit On Top) kayaks were judged largely unsuitable for our angling intentions, and an initial belief that they would struggle to deal with Jersey’s more uncomfortable waters regretfully saw them abandoned. I personally look back and know this to be a hasty decision and a full-blown mistake. Granted, compared to the technically advanced kayaks that we now use, those old two-man plastic hulks were damn awful things. But we lacked essential, relevant experience and the skills of true kayakers to make a more knowing call back then.

However, the persistence of years spent researching, learning, borrowing ideas and expanding the various lure fishing techniques since is responsible for changed perspectives, which have, among other things, seen initially distrusted kayaks firmly reinstated as part of our modern lure fishing equipment armoury. Simply getting out there and trying a variety of methods has opened up a whole new exciting world of fishing for my friends and I.

Fishing for us here in Jersey changed around 2008/09. I would go as far as to say it totally altered the way we approached and tackled the water. Old school methods were not discarded when new ideas were found to work well, but we adopted and adapted, embraced new methods from the USA, Japan and anywhere else for that matter. In Star Trek speak, we became the ‘Borg’ and attempted to assimilate to accumulate. A major culmination of this determined alternative drive was the twin birth of British HRF and LRF. 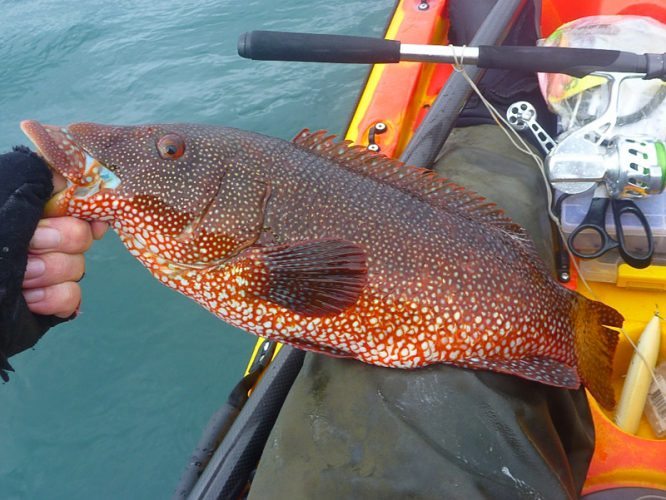 HRF and LRF are newer acronyms for two related and overlapping fishing disciplines that will likely continue to become increasingly popular. Together, HRF – Hard Rock Fishing, and LRF – Light Rock Fishing are essentially developments of US style freshwater bass fishing taken to the sea by the Japanese and integrated/adapted/developed by a small group of hardcore British anglers.

To the surprise of many, catching wrasse on HRF lure tactics is now commonplace. Targeting wrasse with lures saw catch rates go through the roof and the diversity of species we could catch using HRF and LRF seemed to be without boundaries. During that time I even managed to design a range of rods to help exploit our discoveries. For the first time, we could take a rod from shore, kayak or boat and have it perform without compromise because the fishing methods are universal and can be applied to great effect across most situations.

Afloat in a kayak or from the shoreline, HRF/LRF is an extremely mobile form of angling, offering freedom to fish all types of water. Take for instance yak sessions fishing three miles out to sea in a wild wind and swell where upwards of 70 bass were landed and returned in under five hour sessions. 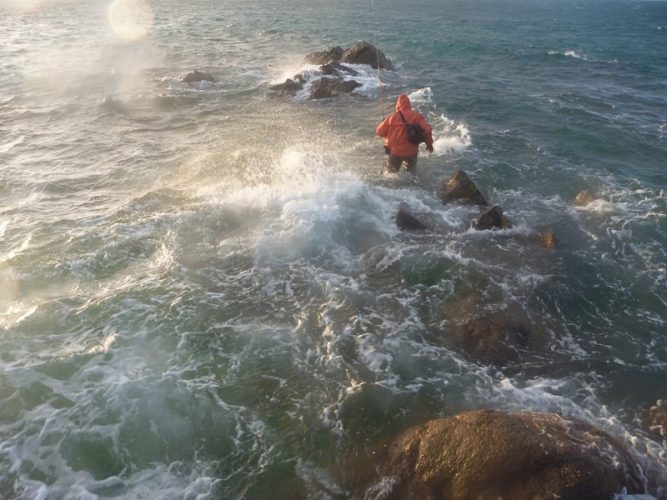 A series of articles in blogs and the fishing magazines followed and slowly but surely word spread. Night lure fishing – once the realm only of the US striper angler, wrasse fishing with plastic lures, lure-caught black bream and all manner of other fish were being captured all around Britain as the revolution expanded.

As the shoreline grew busier it was only natural to look again at taking what we had learned out on to the water. We needed to escape the crowds and the kayak option beckoned once more. Specifically, the requirement was for a mobile casting platform to work from; rather than what might be termed a glorified small boat for traditional boat fishing tackle and tactics. What we had in mind was a more specialist, less restrictive craft, which required a different skill set, and would allow more manoeuvrability within the locally hostile confines of Jersey waters.

The pros and cons of various kayaks can be argued forever, but take it as read that Jersey is very different to many more standard kayak locations, and the requirements likewise differ. Few kayak anglers fish the way we do, or operate in the water the way we do, but in time I genuinely envisage more anglers adopting the Jersey way. 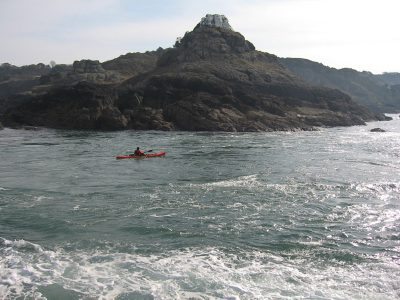 There is a large UK allegiance to the ‘paddle and anchor’ approach among SOT kayakers. Forgive me, but this something that my friends and I rarely do as we fish in water that is faster and far more mobile and challenging than elsewhere around the British mainland or islands. We do use drogues but mostly, we use the hydrodynamics of the available water to position and fish from our kayaks. We are required use to the water much like a white-water kayaker would, but with the eye of a trout stream fisherman too. It’s a rather more intricate and demanding blend of what is the best of many worlds… and what a world opened up.

I approached my friend Derek Hairon who runs Jersey Kayak Adventures in early 2011 and explained that I wanted to merge, to blend, to gel together the skills of a true, unburdened kayaker with what we already knew about fishing water-craft from years of river, lake and sea experience. A conversation something like this ensued: “Derek, I know where I need to be, and I know when I want to be there. However, I don’t know how to do this in a kayak, so please show me.”

Derek suggested I attain my British Canoe Union 3-star skills award, which I duly did, and I couldn’t believe the different skills I was taught. Improved aptitudes were essential to get us to such places and back in safety, by day and night despite what the weather might throw our way. 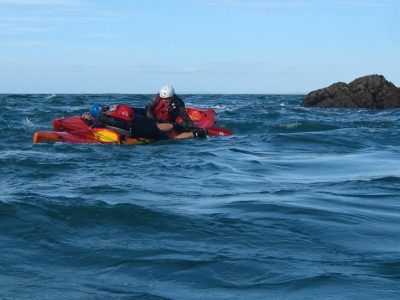 Much of what was involved centred on safety and rescue. There is absolutely no point pushing the envelope only to do a fine job of getting yourself killed through stupidity, lack of training, lack of knowledge or a combination of any of those. The gloves have to come off in hard training, otherwise real life incidents can cause panic. Panic is an enemy I’d rather leave behind on the shore or buried deep somewhere… and the ability to suppress looming panic is something of a skill in itself.

Learning to do an assisted rescue in fast tidal waters is a hair-raising experience, but an essential one. Because we fish in just such waters all of the time, it makes absolute sense to be self-sufficient and self-reliant. Yet for many, their only experience of a rescue scenario is when it happens for real. Things can go wrong real fast in a kayak, so it’s imperative to be prepared and to learn from experts.

Kayak edging is a controlling technique, which, in part, provides an effective means of managing current and waves. Loosely speaking, it is achieved by working the knees and upper body to angle and maintain the kayak in position on either side or edge to increase its manoeuvrability. I seldom see SOT paddlers edging a kayak, and yet it ranks as such an essential skill where I’m fishing. I remember being on local race – La Tour De Rozel – before I commanded this skill, and trying breaking in and out of current. It was flowing at a good rate, and I never even got any chance to correct myself before I was flipped upstream almost instantaneously. This proved a powerful lesson and prompt, as we fished this fast-moving stuff all the time, and wanted to get to this type of water in the kayak and very likely at night.

In truth my passion for pure kayaking grabbed me almost by accident, and seven boats later, I am completely convinced and more committed than ever. I eventually did the British Canoe Union 3 STAR assessment in the company of Andy Benham who travelled over from the UK to Jersey to earn his badge. A battery of bad weather did not prevent us from paddling ourselves to exhaustion, being mercilessly dragged through roaring tide races, pounded in heavy surf and banged silly against the hard stuff countless times in the relentless swells. Gentle Andy has never been the same, and he would no doubt be the first to acknowledge the diversity of Jersey waters and the different requirements to effectively fish therein. 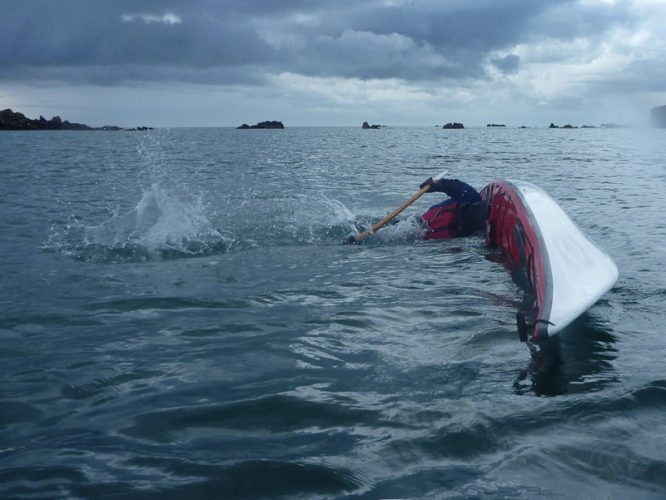 And just like when we first broke HRF/LRF and night-time lure fishing for bass – that some said couldn’t possibly work outside of Jersey waters – I feel that these newer mobile methods of kayak fishing and kayak access will be equally successful as people adopt, learn and adapt them to suit their own local seas, rivers, or lakes/lochs.