Holyhead charter skipper Gethyn Owen discusses fishing for a variety of ray species in the waters around North Wales. Much of his excellent advice holds true for ray fishing anywhere in UK waters and will prove useful to anyone with big rays on their radar. 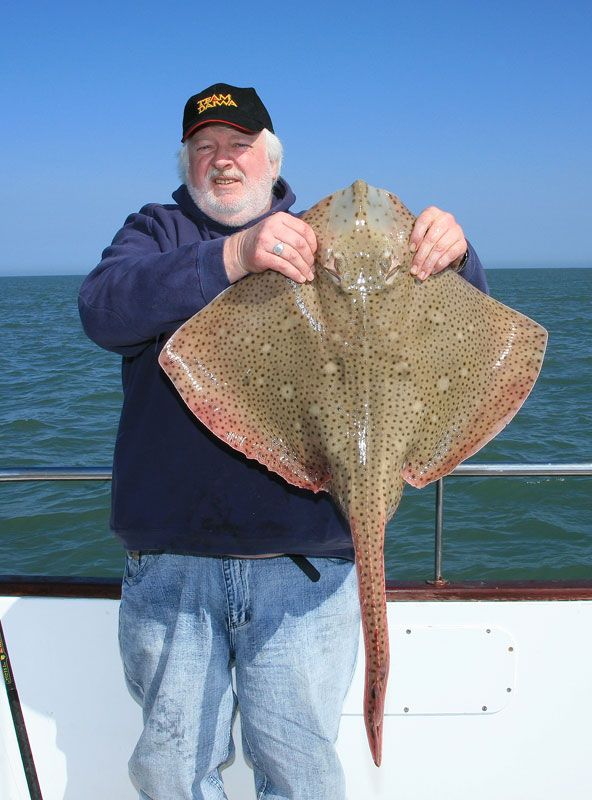 Rays are cartilaginous fish and closely related to sharks, and incredibly, there are over 500 species of rays worldwide. They are massively valuable to recreational angler from both boat and shore, but sadly the numbers of rays landed by anglers and commercials dramatically declined in recent years. Take the once common skate which was once abundant in most UK waters, for example, it is now listed as an endangered species.

The Shark Trust is a conservation charity dedicated to the study and conservation of sharks, skates and rays. Their website at www.sharktrust.org contains loads of excellent information and is well worth browsing. According to the Shark Trust there have been 15 species of ray recorded in the seas around the UK waters. Only five species are relatively common around the North Wales coast where I live and operate as a full time charter skipper. These are the blonde ray, cuckoo ray, spotted ray, small eyed ray and thornback ray, with the thornback being the most common of all as far as anglers are concerned.

A number of years ago now the South Wales Sea Fisheries Committee imposed a minimum size on all rays caught, this currently stands at 45cm from wing tip to wing tip. The minimum size list also states 22cm for a single detached wing, how many single winged rays have you seen caught? What is more ridiculous and alarming perhaps is that the North West & North Wales Sea Fisheries Committee has no minimum legal landing size for rays.

Rays Should be Released

Few anglers could forget catching their first good ray, and some like me gone on to pursue them with passion. I never tire of catching good-sized rays and find the whole experience invigorating. The initial fluttering take, the heavyweight strain as the fish uses its wings to catch the tide like a parachute as you work to draw it towards the boat, the elation of it flapping in the net and the satisfaction of releasing and watching a good ray power away to freedom are all special.

Generally speaking, the north Wales’ rays first appear between the last week of February and the beginning of March. By mid March and through April the fishing is in full swing, with bigger female fish the early norm. Rays can be caught around most of north Wales, with some species more prevalent in certain areas. Thornbacks, while not anywhere near as abundant as they once were, are still caught very regularly along the whole of the north Wales coast, with Anglesey and Lleyn shore and boat marks experiencing the other species of rays in numbers. 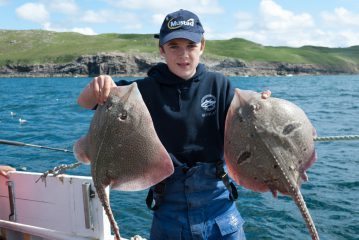 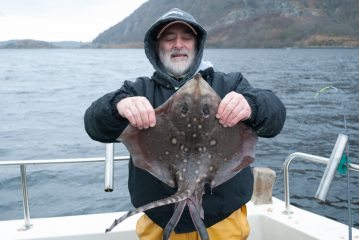 Around Anglesey the vast majority of ray fishing is done close in on the broken grounds. Typical fishing marks for boat anglers out from Holyhead include an area of mussel beds directly north of the port. To the west of the mussel beds, a rocky outcrop called Langdon Ridge is also accessible at slack tide, where many double figure blonde rays and some excellent spotted rays can be caught. While not blessed with great numbers of 20lb plus rays, Holyhead can offer double-figure thornbacks and blonde rays. Further around the coast there are famous ray grounds such as Trearddur Bay and Ty Croes, with Cable Bay renowned for an early influx of thornbacks, spotted rays and the odd small eyed. These marks can offer exceptional fishing from the boats and shore.

Boat fishing for rays is not complicated and the most important thing is location. Downtide tactics are fine and catch plenty of rays but uptide fishing can be a very productive especially in the shallower waters. Good uptide casting puts baits away from clattering boat noise and ensures that baits are anchored firmly to the sea-floor for mooching rays to home in on. Mackerel, sandeel, squid, bluey and peeler crab are top ray baits. My most successful baits continue to be with either whole squid, or squid and sandeel cocktails. 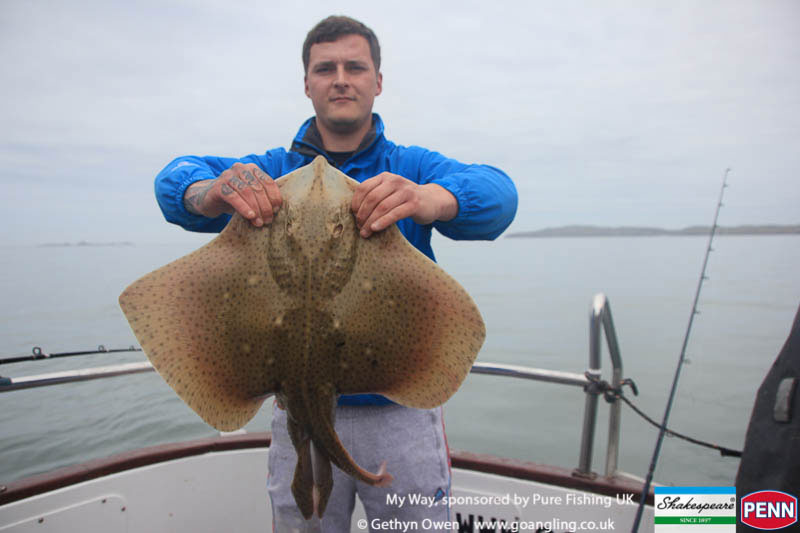 One of the main problems when targeting rays especially the broken grounds around Anglesey is an abundance of hungry lesser spotted dogfish. Regularly a meticulously prepared and presented ray bait is sent to the bottom, only for a bloody dogfish to grab it within seconds. Dogfish are something of an occupational hazard that you just learn to accept, but you can better your ray chances by paying attention to the type and size of baits used. Avoidance of dogs is the reason that I personally don’t often use modest cuts of mackerel for rays. If I do use mackerel then I tend towards a fresh whole fresh mackerel fillet topped off with a generous dollop of squid… this really is a top bait combination for big rays of all species. 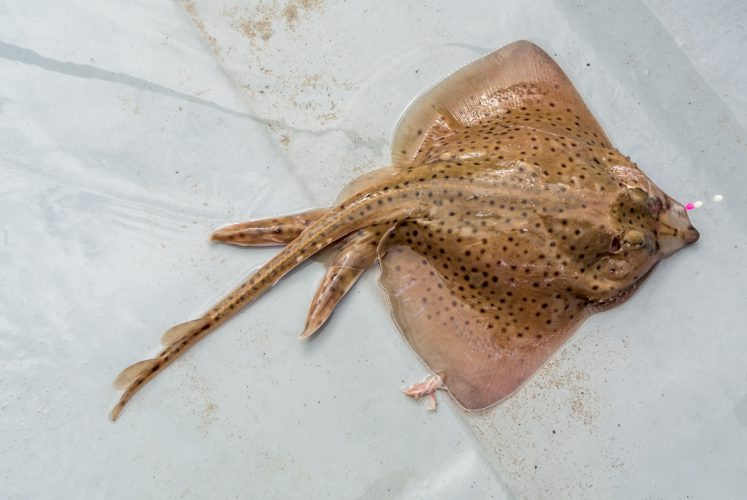 A simple running ledger using either a single hook or tandem pennel arrangement is the best all round rig for both downtide and uptide fishing. Don’t make the mistake of fishing too light in the trace as rays have extremely powerful mouths and a rough, trace destroying snout. I have seen many good fish lost because anglers thought a 30lb mono trace was robust enough. Choose a 50-80lb mono hook-length, and hooks between 3/0 and 6/0 depending on the skipper’s advice. 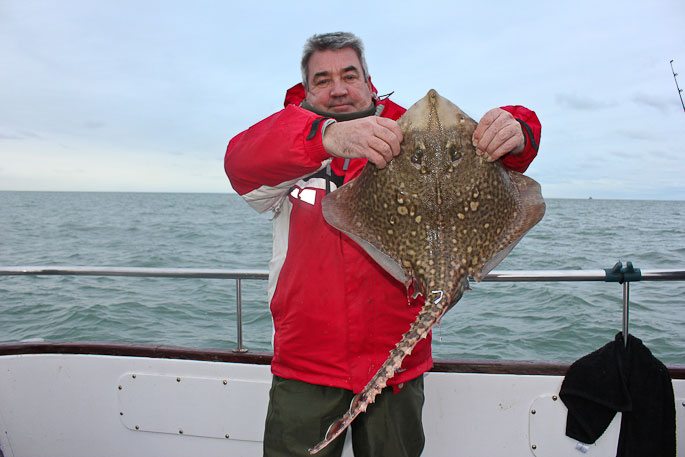 Bites from even big rays are often timid and far less obvious than less experienced shore and boat anglers might expect. Bearing in mind that the mouth of the ray is on the under-slung, the fish needs sufficient time settle on a bait and work itself into a position to eat it. The beginnings of a ray take can innocuously manifest as no more than the line being pulled down negligibly in the tide, and occasionally with a small flutter of the rod tip which could easily be dismissed as crab attention or very small fish interference. As a fish settles more on the bait, the rod tip often bends further as more line is disturbed down by a large wing or the body of the fish. If this visible action hasn’t prompted you to pick up the rod and wait, you soon will as the ray makes it presence more violently known as it powers away with the hook fully in its mouth.

Ray battles are not typically line-ripping affairs. But the solid thump, thump of a big blonde with its nose buried in hard run of tide will test any angler’s tackle and their mettle.