Mention the word smoothhound to a sea angler and it will send a tingle down his or her back. There’s something about these long, lean fighting machines that will set the heart racing! Add that to a shore caught hound off a shallow beach and the recipe is set.

There are two types of smoothhounds in European waters – starry and common. The starry hound has a covering of small star shapes along its back, hence the name. The common smoothhound has no markings and is just grey in colour. Scientific research, supported by regular site contributor Gethyn Owen, has shown that the likelihood of a common smoothhound being landed in UK waters is very slim. Out of 430 DNA samples from hounds with and without spots not one was found to be a common smoothhound. Both species are hard fighting and can grow up to 4ft long and weigh in excess of 20lbs although a 10 pounder is a very good fish from the shore.

The smoothhound arrives on our British coastline around May time and will stay until September; not all parts of our shore line will see these pack fish, but they do tend to return to the same areas every year.

Basically find an area that will hold some hounds and keep your ear to the ground as they will be in an area for a week or so. They are a pack fish and will move off somewhere else, thus with hounds it’s all or nothing, once they’ve gone they all go! 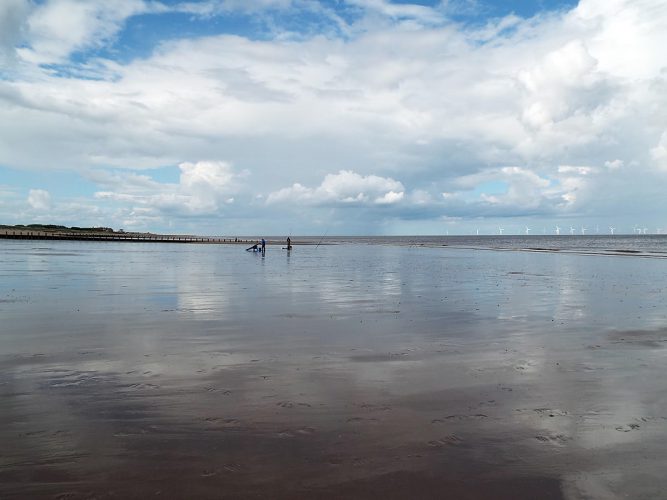 Top bait has got to be fresh peeler crab. Frozen crab will also catch but fresh is best. If you are particularly lucky to find a large pack of hounds, they will virtually devour anything that is put in front of them and squid will also catch a few. In some areas hermit crab, rag or prawns are effective baits but tend to attract less welcome species. 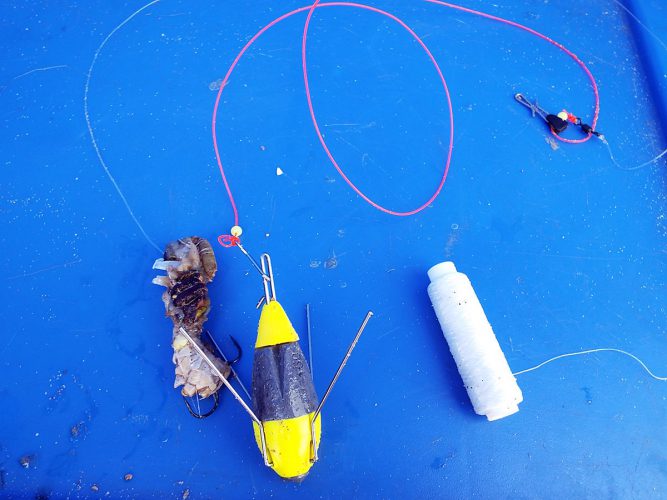 Tackle wise, I tend to use pulley pennels, 30lb hook traces and Kamasan B940 2/0 hooks for their strength.

My area of coast is around the south-east between Walton-on Naze and Clacton and unfortunately we haven’t seen sight nor sound of a smoothhound for some years, which is strange really as some years ago they used to arrive in numbers along the Walton to Frinton shoreline. For some reason one year they didn’t turn up and to this day they have never returned, apart from the odd few from the local piers.

I am always keeping my ear to that great fishing network and waiting for the phone call that will see me winging my way at the drop of a hat.

It took until the first week of July before they arrived and I had the thumbs up from a good friend, Gary Pye from the north-east. Gary had travelled down to the flat shallow beaches of the Lincolnshire coast and he found the hounds feeding and told me that he had caught hounds to 15lbs. A quick phone call to fishing buddy, Joe Mcdonald and we arranged to hit the road the very next day and the 3 hour drive up to Lincolnshire. 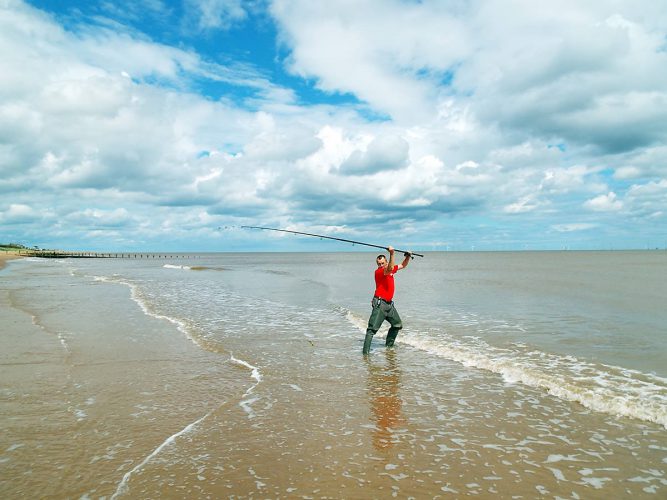 The weather forecast wasn’t particularly good with a strong south-easterly and some rain, but when the hounds are in you might only get one chance, so it was all or nothing. We hit the road at 7am hoping to reach Skegness in 3 hours. No such luck, rush hour and road works took its toll and it was 11.30am before we arrived although that also coincided with high tide.

A look along the beach and not another angler in sight, we had the whole beach to ourselves and that strong side wind had turned and was directly behind us, it looked like we had picked the perfect day.

Even after all my years of fishing I still have this nervous feeling before I start any session, which manifests with trembling fingers and light head. Very odd I know, but give me 30 minutes and I’ve settled down and then I have my fishing head on.

We had brought with us fresh peeler crab, frozen crab and enough ragworm to supply half of the tackle shops around our coast.

No time to set up the beach buddie, the rods had to be rigged and baited up and fishing before any of that fancy stuff. First cast saw the lead sail out with the off shore wind and land as a distant plop on the calm sea. It didn’t take long for the first bite as I was still threading the line through my second rod and my first rod had taken on an alarming bend with screaming ratchet. 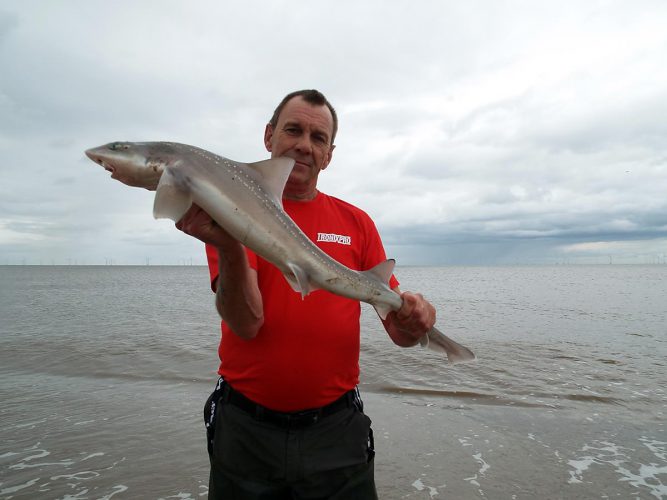 This was the start of probably the best fishing session I have ever had, although landing three stingrays earlier on in the month was going to take some beating.

First smoothhound landed, a fish of around the 6lb mark and Joe was also into a hound of similar proportions. To be honest the next two hours were going to take some beating, I went down to one rod as to fish with two became very complicated with bites and a steady stream of medium sized hounds every five minutes.

I changed tactics; bigger baits, ragworm threaded on the line and with a large helping of peeler crab on the hook, the baits were flying out of sight and with that wind behind us we were surely going to be in big fish country.

Big fish on! Well that didn’t take long, this time the rod took on an alarming bend and with a screeching reel I struck into something that really wanted to fight back and was taking line. Ten minutes later I was playing the biggest smoothhound that I have ever caught from the shore and watching that large dorsal fin cruising up and down in the surf was a sight to behold. 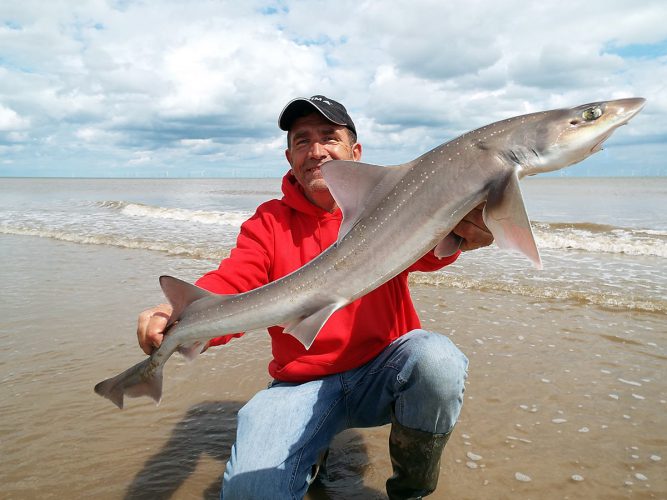 I was soon looking down on a smoothhound of very large proportions, fish like these are the bronze whalers of the Namibia coast to us east coast anglers. A quick trip to the scales and a hound of 15lbs was released, and to be honest the tide was now nearly three hours down and the big pack had moved off into deeper waters, no more bites materialized no matter what baits we tried.

Joe and I sat back and regrouped on what we had experienced. Nothing had ever compared to what had been thrown at us in that last few hours, it was just good to have a breather and a bit of lunch, cheese and pickle sarnies and diet coke, yum.

Feeding on the Flood

No bites materialized, so Joe had a mooch around the long wooden breakwater that we were fishing alongside to see if he could find any peelers. He returned with ten, some soft and others just peeling! A great result as we had already used more crabs on the ebb tide than we had planned. Low water came and with the sun low on the horizon would we see any more hounds before we headed home. I actually drew a line in the sand 20 yards from the low tide mark and I said to Joe if the tide reaches this mark without a bite then we should pack up and head for the long trek back home.

Well, the tide had just about reached that mark and all hell broke loose! Both my rods keeled over simultaneously and in that first 30 minutes of the flood tide I landed eight hounds, unbelievable, but it happened. With very tired arms and body and at nearly 8.30pm we decided to pack up and hit the road. 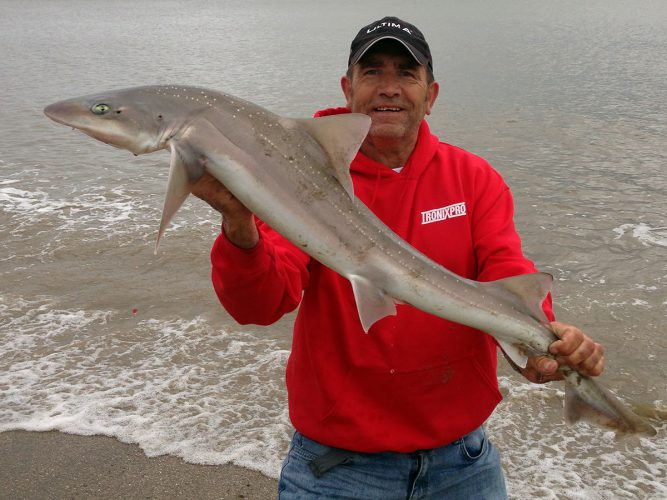 This was definitely the best fishing trip of my life. I have fished Iceland more than once and that was out of this world, but this adventure had the edge. Joe and I landed more than 50 smoothhounds each in a nine-hour session to 15lbs which has to be some sort of record.

If you fancy a trip like this you will have to plan ahead and hit the road at the drop of a hat, as the hounds don’t hang about. With the internet as a source of up to date information we have now it doesn’t take long to find out where the fish are feeding, it’s just a case of setting that alarm clock and heading for the trip of a lifetime.