Pinpoint knowledge of your venue is a priceless commodity in rough ground cod fishing, but quick feet can be a big help too, as Steve Souter and pals are reminded during a speculative visit to Doonie Point at Muchalls near Aberdeen.

Carved of numerous rocky juts and indentations, the harsh shoreline of Muchalls positively brims with untapped cod potential. Having never fished this particular stretch before, it’s a place that’s narked me for many years and my conviction was that it would provide fish to anyone prepared to investigate it properly. 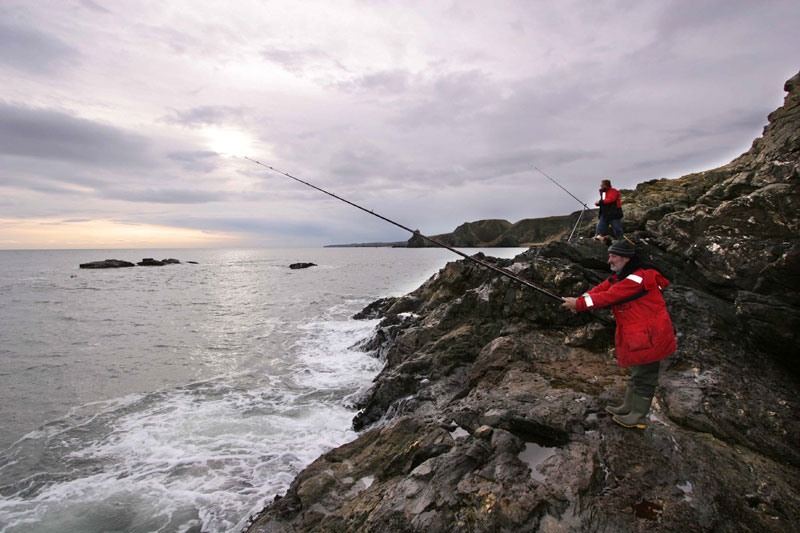 An old friend, who hung up his shore poles long ago, used to recount equally well aged tales of hardy cod anglers departing the steam train at Muchalls and heading off to the nearby rock marks. The catches made on primitive tackle and baits were usually enough to keep families in fresh white fish for days apparently. Alas, the railway station is no longer there, and the standard of North Sea codding has vortexed down its own plug-hole in recent decades. But these indomitable rocks are a constant, and there is no reason why decent numbers of cod by today’s standards shouldn’t be caught now.

I could see no reason why the area wouldn’t produce fish in the modern era, but my curiosity has always niggled as to why there is little mention of Muchalls among the regular cod-roving fraternity. Could it be that it’s a secret well guarded? Or, might it be that there is some unobvious downside to the place? I would have my answers to those questions soon enough.

Cod fishing in the Scottish north east had been indifferent in the days and weeks leading up to the weekend. Our band of five adventurers weren’t exactly bursting with ideas, and my suggestion to give Muchalls a bash met no objections when the question of ‘where?’ arose a couple of days earlier.

In keeping with many coastal settlements hereabouts, the charming surrounds of Muchalls and its rocky outward crust are steeped in sinister history. Stories of smugglers’ warrens and ghostly phantoms abound, but for all that, Scotland’s most famous bard, Robert Burns once described Muchalls as “a good deal romantic”. If first impressions count for anything, it is difficult to disagree. 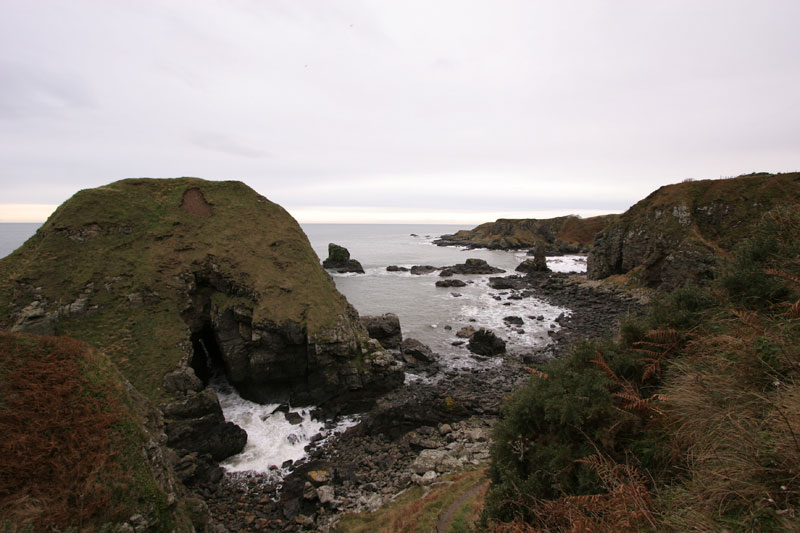 Muchalls is an expansive area and I had no directions to any specific marks. Views of the shore edge from the high cliffs at the northern end of the venue are a sight to behold. Rock landmarks with captivating monikers such as Grim Brigs and Brown Jewel adorn the Ordnance Survey maps. But if the names on paper prick the attention, seeing the area in the flesh is something else; there is a savage splendour to the broth of raw rock features greeting unsuspecting eyes.

Various little rock islands that screamed cod immediately caught our attentions. These were lapped, and in some cases surrounded, by the incoming tide. A lone skyward pointing finger – the isolated sea stack known as the ‘Old Man of Muchalls’ – stood out to the right, while rock-strewn basins cut into the shore either side of what I would describe as a lumping great hillock directly in front of us.

No Shortage of Choices

The place was a scatter of choices, most which I would later come to rue passing over. The grass is always greener, as they say, and after a brief inspection of all before us, we decided to head for the obvious point that protruded well out to sea about a mile in the distance. Getting there wasn’t any walk in the park, especially when encumbered with rod carriers and rucksacks stuffed with lead. 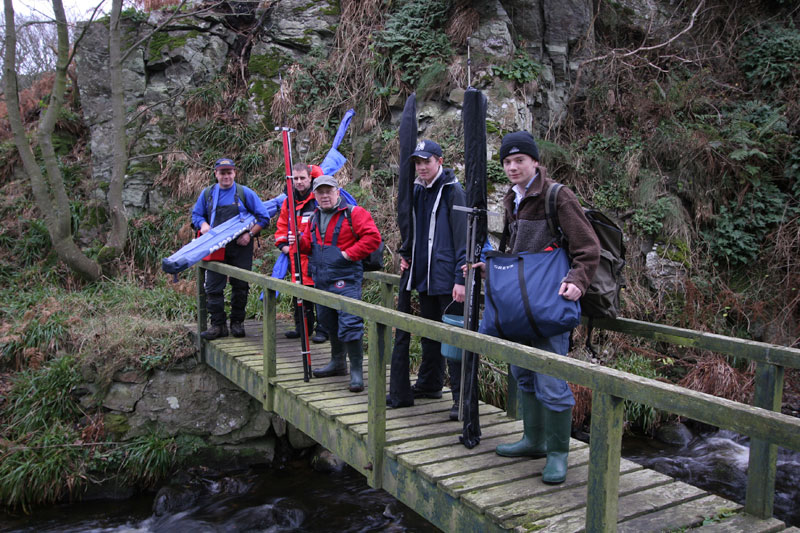 Five of us, dads, granddads and younglings yomped for 25 minutes across several fields, creaky stiles, dry stone dykes, streams and footbridges. We had no prior experience of the area, so this was a simple case of following our noses in the general direction of where we wanted to go. The sweaty toil aside, it wasn’t an unpleasant trail under the winter sun, but the killer irony here is that I later discovered we could have deviated down an alternative quiet track and parked up a couple of hundred yards from Doonie Point, which I also later discovered, was the obvious protrusion we were headed for!

Cresting the last rise, we were again greeted by the scabrous shoreline. We had emerged only a short distance from the point, and access to it looked straightforward. While mulling over that thought, I spotted two anglers cutting across the field to our right: they had spotted us too, and were now galloping towards the mark ahead of us. 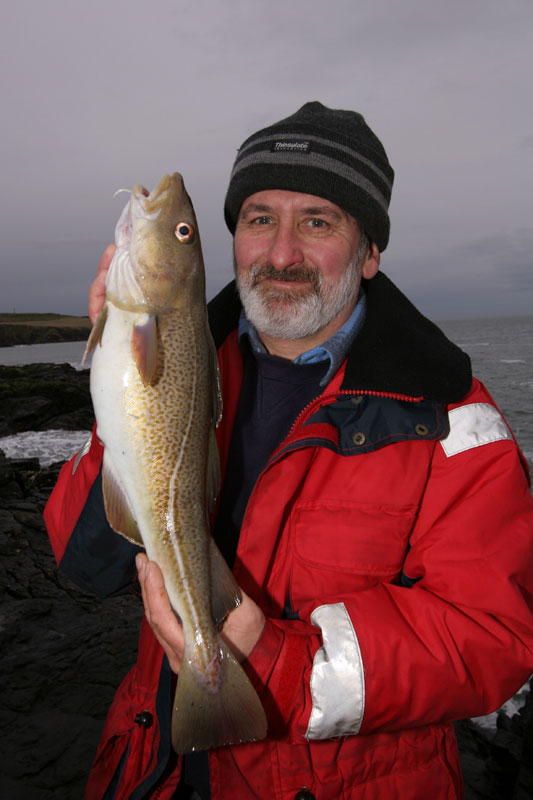 Unlike us, Craig Dempsey and John Osinski from Fife (the two newcomers), had fished here before. They knew well that space on the point was at a premium, and that first to reach the mark would claim the prime spots while relegating the stragglers to adjacent problematic rock platforms. John in particular was off like a shot, scurrying over rocks and up onto the point like a proverbial rodent up a drain pipe. I’d have raced him for it had I been on my own, but in present company, dignity reined me in…this was supposed to be a relaxing day out after all.

As expected the Fife lads commandeered the point, and with no ‘plan B’ up the sleeve, we split up, gingerly traversing the exposed lower lying rocks to the left of the point. I won’t spout bull about using skill and watercraft to pick a likely spot because the truth had more to do with beggars, choosers and necessity. The flood tide was an hour-and-half old and already forcing into a wide trough that snaked round behind us. With no previous experience of the venue to call upon, where to set up came down to not wanting to be cut off.

Lug/crab baits carefully mounted on simple single hook rotten-bottom rigs were quickly winged seaward. Lack of venue knowledge however, stung me minutes later when an attempt to strike a solid bite saw me snagged solid and lose the lot. Beaten, despite trying every trick in the book, I had no choice other than to haul the rod over my shoulder for the break.

The fuller nature of what we were casting into became obvious when Mark and Shaun tried to wind in and found themselves likewise hopelessly locked into seabed. Shuffling along the rocks in the hope of identifying a less vicious tract didn’t help any, and long casting or short made no difference to our tackle casualties as the ground continued to swallow just about every lead and rotten-bottom cod rig we sent out there. I was pretty sure by now that this wasn’t one of the spots those Muchalls’ old-timers would have been fishing! 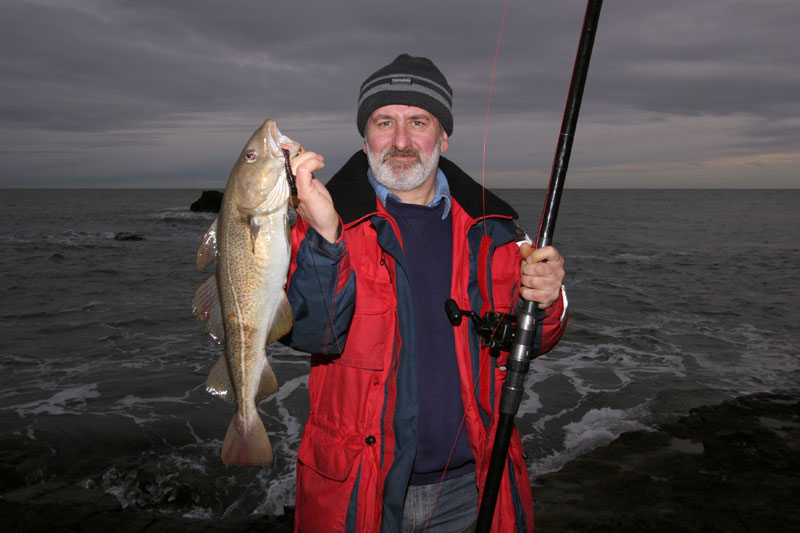 With a cautious eye on the fast-filling gulley behind, I caught sight of some action back along at the point. John’s rod was pulled over into a healthy bend, and he was now carefully working to draw the fish ashore. Craig stood close by, monitoring John’s progress, ready to get involved should an extra pair of hands be required. A cod of about 4 lb broke the surface about 20 yards out as John slowly eased himself a little closer to the edge of his perch. Seconds later, with an assured expertise that marks an experienced rock angler, John dipped his rod and swung the kicking fish to hand in one fluid movement. He hoisted his cod in the direction of three envious pairs of eyes and I gave him the thumbs up which said: “Fair play… B@$#@RD!”

In truth we hadn’t been fishing that long and following another round of tackle-ripping snags, John’s success was the final straw and our cue to beat a retreat. With the tide now well up in the gulley and our route to safety fast disappearing under water, we conceded defeat and abandoned ship. Stan and his grandson joined us at the top of the shore and reported a couple of coalies from equally merciless ground that they promised never to revisit.

On the way back to the cars, we stopped to chat with John and Craig. In stark contrast to our misfortunes, it turns out they had missed other fish each and lost only a couple of leads…what price local knowledge?! 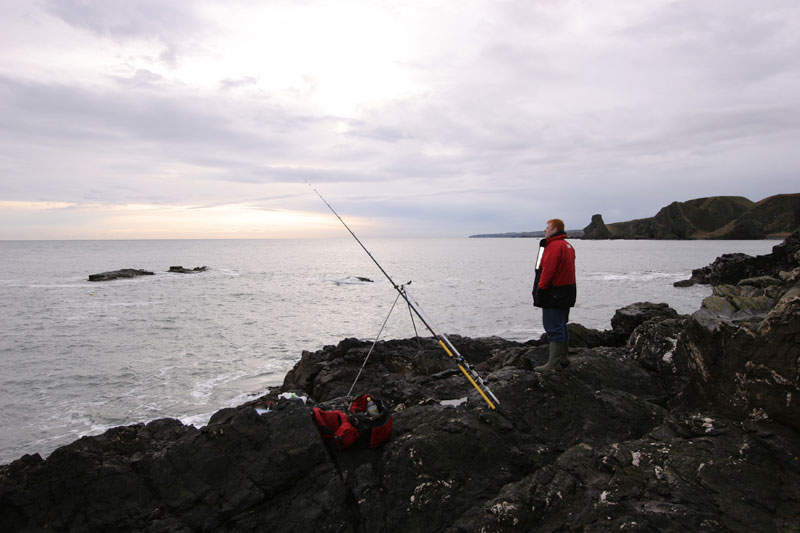 It would be easy to be totally dismissive of Muchalls on the strength of this bad experience, but I won’t be throwing in the towel just yet. I still have a hunch about the place…an infuriating itch that still needs scratching. Putting events in perspective, if nothing else, we learned exactly which parts of Muchalls not to fish, which I suspect is only part the picture. I saw too many mouth-watering possibilities from where we first surveyed the shoreline to concede defeat after one bad outing. If the opposite end of the venue that I earlier ignored comes up trumps then I’ll let you know, if not, then I’ll never mention Muchalls again!

Getting to Doonie Point, Muchalls

If we had paid closer attention to the map and parked at ‘Bridge of Muchalls’ rather than a full mile further back at Muchalls itself, we would have had only a short hop to the mark of choice. Take the A90 past Stonehaven and on towards Aberdeen. Turn off at Bridge of Muchalls which is clearly signposted on the main drag just before Muchalls itself. Follow the road to the end, and park courteously alongside the little cluster of stone dwellings and outbuildings. Doonie Point is a short jaunt from here and obvious from the edge of the shore. Ordnance Survey map, Landranger 38 covers the area.