Fishing, for the most part, is predictable… but not always. Every once in a while unexpected things happen. These all too rare occurrences have the power to consume an angler, and the effects are lasting. I speak from recent experience, having stood on the rocks and wrestled a memorable tug-of-war with a mighty fish that eventually left me collapsed in a heap of physical and mental tatters. 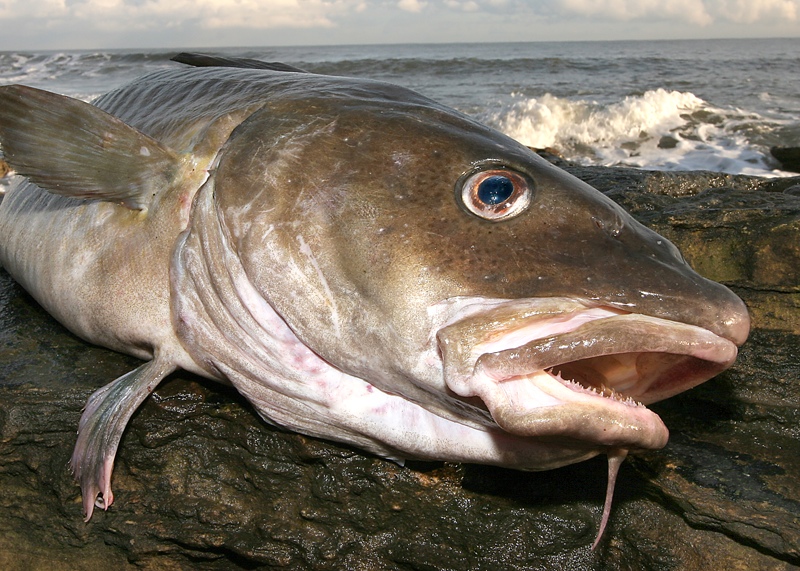 For boat anglers, big fish close encounters are perhaps more anticipated in something of an occupational hazard sort of way. Scary stories however, are not as ten-a-penny among shore fishermen, and pack a far harder punch in this writer’s opinion. For many of us, these kinds of infrequent adrenaline overdoses are the ultimate high, and it’s the very craving for those addictive nuggets of the extraordinary that revitalise passions for fishing, while stoking our dependency on the same.

The story takes place on a lonely rock ledge on a still afternoon in the middle of nowhere. I was cod fishing, and stood perched on a secluded rock with my pal Stevie in anticipation of some routine codling ‘bump-and-grind’. Things were slow to start, and I soon began to fret about blanking. Against my better judgement I opted to fish a second rod which I dislike doing on the rocks.

I was busy with a codling of maybe 3 lb on my first rod. After a brief tussle, it swam under a great big rock out front and snagged me up. I could see from the angle of the line that it was likely to swim out again if given a little slack line, so I proceeded to give it enough rope to hopefully hang itself. While doing this, I happened to glance up at the second rod and spotted only the faintest little flicker of a bite. The nibble was so gentle that I wondered if I had seen it at all. Any doubts vanished though when the reflective tip trembled a second time before pulling over, and over into a rapidly extending bow that promised to haul the lot into the sea if I didn’t react right away. 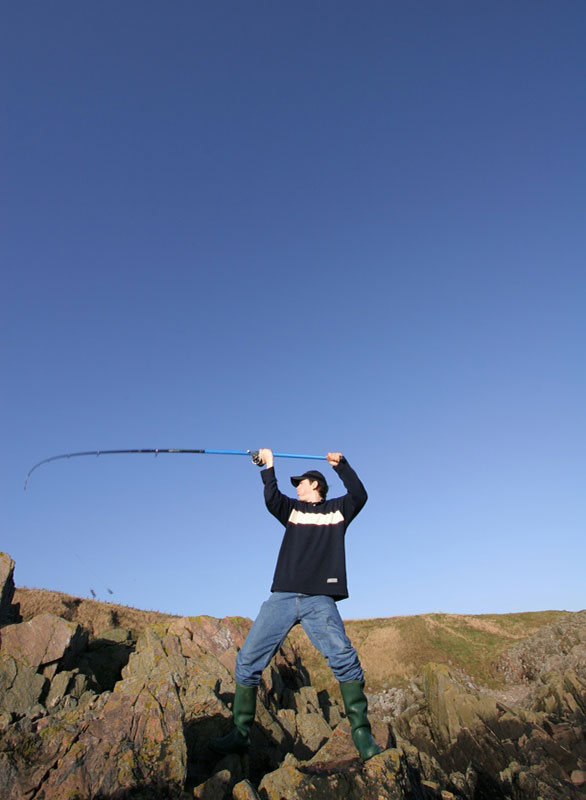 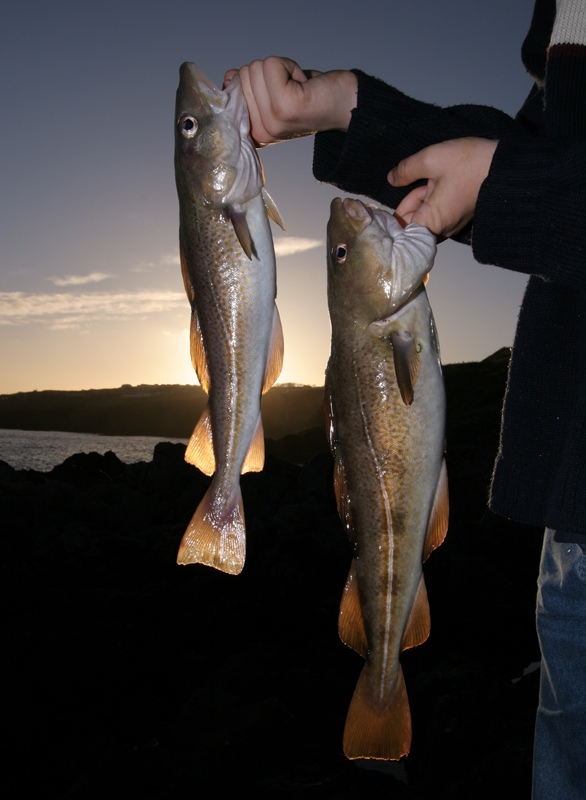 I threw the rod connected to the jammed codling into the hands of Stevie, and threw myself at the other rod about a split second before it flew into the sea. The odd bite-and-pull-down was not typical of a cod, but panic ensures such things don’t occur to you at the time.

With the drag screwed full on, I wound down and struck into almighty resistance… similar to a head-on collision, one imagines! The rod was the meaty Sonik SK4, and it keeled over tip to spigot as a seriously weighty beast towed the bait away, and threatened to do the same to me! I was immediately on the wrong end of a mugging here, and being wrenched all over the place. It was all I could do to jam my feet, stay focused, and hope that the fish would about turn in my direction.

The reel conceded stuttering spurts of line as I failed to win an inch. After a few seconds the fish stopped dead, and with taut, white knuckles, I rapidly adjusted my grip and screwed the star drag to the physical max. The impressive hoop in the rod didn’t relent, and I just about held it together during the next round of jarring heaves that pretty much shook me to the soles of my boots. Given the minefield of snags and the pronounced ledge some 30 yards out that had robbed me of a considerable amount of tackle already, the chances of me landing what was clearly a very big fish were slim indeed. 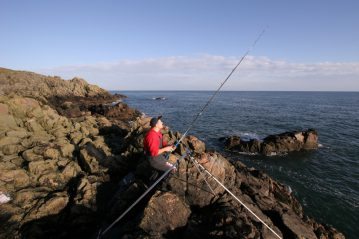 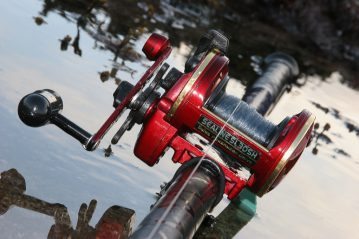 A pause in the fish’s power-pulling saw the rod relax slightly as the bludgeoning burden appeared to ease. I wasn’t the favourite in this battle, and I decided that to have any chance of coming out on top, I had to square up to my opponent with equal aggression. Three piddly quarter-turns of the reel handle won back an insignificant amount of line, only for the enemy to literally bring me crashing to my knees and haul back maybe four times that amount in a juddering assault on the reel’s hard-pressed drag mechanism.

This kind of rock fishing is supposed to be hard work, but what was happening here just wasn’t in any script I’d read. The fish stayed deep and the stretched 35lb mainline sawed an erratic slot in the surface. Ridiculous as this must have looked, I was crumpled on painful knees, with both hands rigidly fastened to buckled carbon. Realisation smacked me round the neck, arms, shoulders, back, and dodgy knees… surely this was no cod. If it was, then god knows what sort of proportions we could be looking at.

Out of the blue, the fish began to edge oh-so-slowly towards me. Regaining my feet, I was finally able to grind some line back on the reel. My best grunting efforts ushered it perhaps 10 yards forward before it found the ledge. According to Stevie, I spat a swear word at this point. There was no possible way that I could raise this thing off the floor and clear of the obstruction. I silently began to prepare for the inevitable. 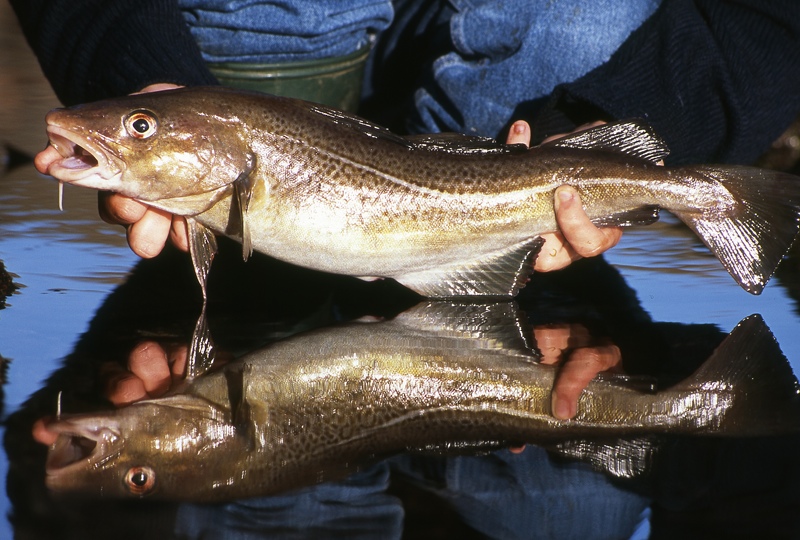 Although the fish had locked into the seabed, I could feel the lead was clear, and it continued to leather the rod with a series of clobbering wallops. Clutching at all available straws, I tried everything to reverse the advantage: spilling back some slack line hoping he would swim free; moving left and right praying that altering the angle would coax him free of his adopted home; even battering the brute with as much stick as I could administer without bursting the hook-hold… all to no avail.

In the end I simply wound down hard and held on hoping for the best. Some 6 or 7 minutes later pennel 4/0 cod hooks pulled straight, and I fell back on my haunches. Body and soul screamed that I had just lost the battle with the biggest shore fish of my life. In three punch-drunk words I felt: battered, breathless and bereaved.

What could that fish have been? What size? Having not caught sight of it, I will never be able to say for sure. But on reflection, large conger jumps to mind. I am no shore conger expert, but I have caught angry eels to nearly 30lb from rock marks, and those previous snakes felt like juniors by comparison. 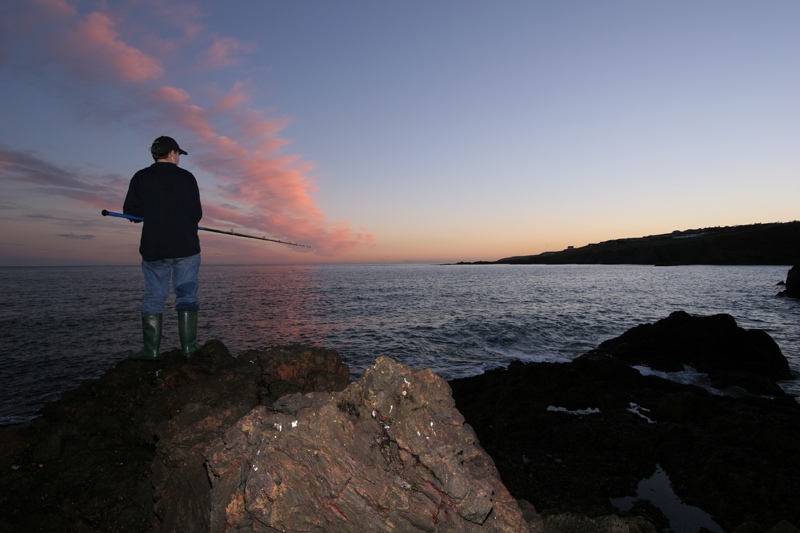 Weeks on, the smothering cloud of purest frustration has dissipated somewhat, but obsession remains. The legacy of the encounter and my penance perhaps, is to repeatedly replay those mad few minutes both in wakefulness and sleep. That formidable creature’s precise point of departure and last known abode is fixed in my brain, and I hold to the dream that there may yet be a next time.