We hitch another exhilarating ride with Jersey-based lure and kayak expert, Keith White, as he explores different types of ‘boats’, essential equipment, and the vital importance of instruction and safety when indulging in this incredibly liberating form of sea fishing. 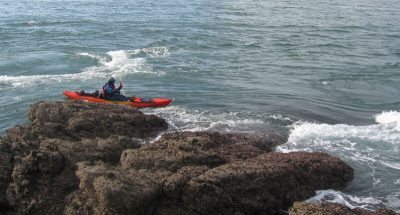 As I started to slowly acquire the kayak skill-set necessary to deal with Jersey’s challenging waters I found myself sitting in a proper sea kayak, frolicking in a white water style boat, on wave-skis and exploring all manner of other craft. The addiction had well and truly gripped me to the extent that my wife suggested I had serious plastic and fiberglass issues!

Along with the bruising traumas of time well spent learning those extra skills came better and safer fishing. In places where we dared not let go of the paddle before, we were now just drifting inside the funny water line and fishing. Then we were kayaking in darkess on the edges of tricky races and tidal creases, and negotiating those same gutters all around our coast… much to the disbelief of many, I hasten to add.

We adapt and use many methods as we gain access to different water types that often demand differing approaches. And the best advice I can offer any budding modern lure fishermen, whether they fish afloat or ashore, is don’t get stuck in a rut. Change with the changing environment and adjust with changing pressures or, suffer the consequences in your catches. If we accept that fish are constantly moving then so should we be too, both physically and in terms of our thinking.

People say bass are hard to catch – I don’t think that they are. The hard part is getting your lure or bait in front of one. With continuing pressure from commercials, we’ve had to make these extreme efforts with the kayaks just to get us onto virgin water where the bass aren’t being painfully exploited.

Team efforts returned 875 bass in the 2010 season, with over 600 during 2011, and 1200+ this year so far, with Christmas 2012 looming. Every one of these bass fell to lures. Alongside the bass there were many more good wrasse and pollack, plenty of black bream, and mackerel, garfish, pouting etc. across the same 36 month period. The rub is we weren’t even fishing expressly for bass, and yet I caught some of the biggest I’d landed for years because I now had access to untapped waters. For success at this game in a changed world, my message remains – adapt or die. 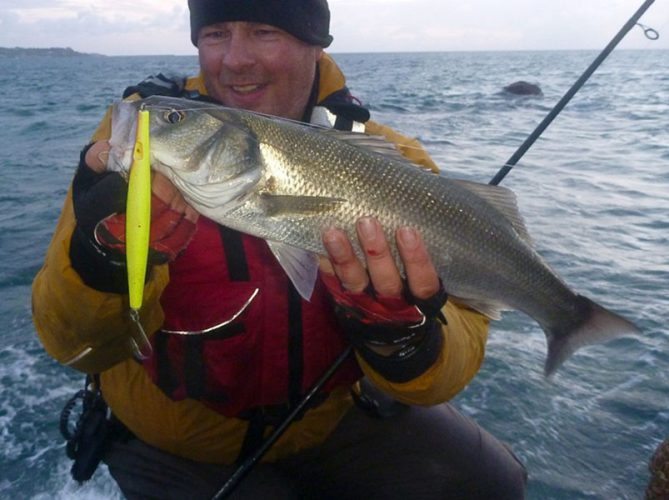 With much on-going assistance and input from the likes of Derek Hairon of Jersey Kayak Adventures there are now plans to tackle the outlying, offshore islands in the sea kayaks, using them as a mode of transportation to take us to fishing places where humans rarely, if ever, venture.

Four of us started out, last summer with next to zero ‘sit-in’ kayak experience, our lot was just the in-the-water stuff and SOT fishing mentioned in the previous feature. A few months of 4-Star training later, and all can now roll; over on both sides and one-handed and even hand roll on occasion. Believe me, the mastery of safety orientated techniques such as ‘towing’, ‘re-entry’ and all that comes with the 4-Star training course is very useful if not essential… even if it does sound like mind-melt to some readers!

As you learn something new, you often have the desire to learn more. This is true of my love affair with the Greenland Paddle and has kindled a passion for Inuit kayak tradition. Why? Well, isn’t fishing hunting? Isn’t a quiet paddle better? The answer is yes on both counts. 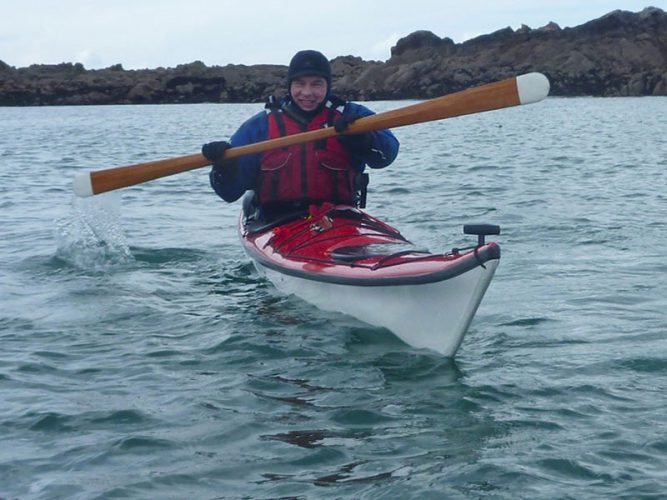 I have approached current seams in my SOT and sea kayaks at night on a mirror calm sea and barely left a wake. Rolling and paddle acquisition at night is just awesome and though I have to yet try it in anger, because thankfully I haven’t been forced, having that one-piece paddle over the front deck is just such a confidence booster. In the practice pool and during the cold winter sea, I practice the Greenland shotgun roll and butterfly roll. Paddling with a simple yet super-efficient Greenland blade works for the Inuit, and it certainly works for me.

I was nearly pulled over in my Valley Aquanaut – an 18ft long, 21.5” beam GRP sea kayak – one night by a good pollack some way out to sea, on my own, in the pitch black, in a rolling sea and near a tidal headland race, but I wasn’t phased. Only a few nights previous we’d practiced winter night, rolls in the pool. 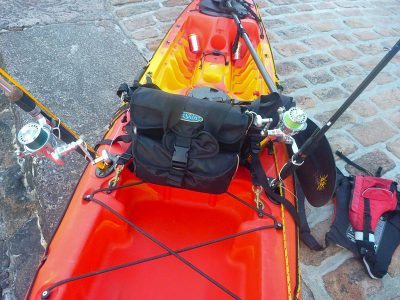 Practice goes a long way towards perfect but most importantly it breads confidence to handle to unexpected surprises. Although this practise session was carried out in a controlled environment, it laid a solid foundation for the harsher reality of a successful roll in the freezing sea, in considerable current and in full darkness.

Rolling with confidence led to sculling and bracing better because, knowing you could roll up, meant you could take off the handbrake and relax. There were people who started alongside us that didn’t learn and are still the quaking, bolt upright, jellies in boats, and I’d rather be comfortable in my wet surroundings.

Safety and fishing gear must be compact and manageable. I don’t pack a crate full of gear. Everything is on lanyards, with an anchor trolley for drogues as we rarely anchor other than to lock the kayaks down to rocks. I carry a buoyancy aid, while reels are VS100B’s. At risk of sounding arrogant, I know that if I get upturned, I can get it back upright, and get back on board, day or night, because I train and practice all the essential skills. Also, because my kayaking colleagues train equally hard, I know that if something went badly wrong then they would be on hand to assist.

Just as our lure fishing continues to develop and progress, so too does our kayaking. Changes in equipment to unlock more and more of the potential being discovered are inevitable. We are now also looking at building traditional Greenland SOF boats for use in the gutters and inshore waters around Jersey. These craft are sleek, lightweight and built for the hunt.

Ultimately my kayaking is a means to a fishing end, and I can’t foresee any future where we don’t end up with a rod and reel, a small lure pack and a paddle, sliding and gliding through the fast, shallow and normally super clear waters of Jersey’s South East coast and beyond. The ability to roll with fish on the line is something being worked on right now as sooner or later a good bass perpendicular to the kayak and in fast water will have us over. At least we don’t have hungry polar bears or an angry walrus to contend with!

We use GPS too, as well as dead reckoning and celestial navigation, but sometimes looking down or trying to read the GPS as a lone method of navigation is downright suicidal. It pays to observe that GPS works in straight lines – the sea doesn’t. 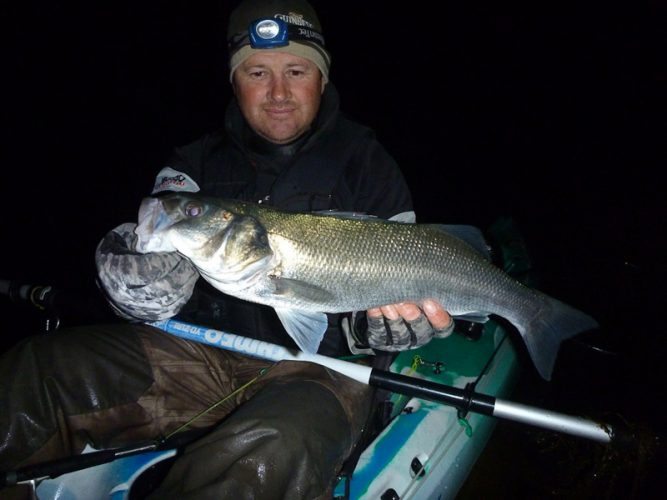 Laying the terminology and technicalities of safe and successful kayak fishing aside for a second, being hopelessly smitten by the sheer fun and compelling merger of skills are the underpinning factors for me. But, given that we are venturing further in more challenging conditions, yet more
specialist training is required, and as this arm of the sport continues to grow, I am giving serious thought to taking coaching qualifications.

I think this journey has many magical turns yet to take. Looking back, some of the stuff we have achieved in 2012 would have sent a chill down my spine a few years ago, while I would have labelled suggestions of crossing three miles of fast-moving water in darkness and winds as lunacy. Maybe I have gone mad, but I prefer to think I have expanded my horizons to a life-changing degree.

No Devils in this Detail

Group-launching ‘blind’ in surf with just a compass or GPS bearing on the dark but celestially clear stormy nights presents all sorts of challenges that experience helps address. You see nothing at times when there’s driving wind, rain, and water busting up against both the kayak and any nearby rocks. This though isn’t the real problem, and the water we paddle is regularly strewn with rocks and sometimes man-made hazards that might be concealed depending upon the tidal state. You learn to listen and feel the water, while thinking about the team at all times. 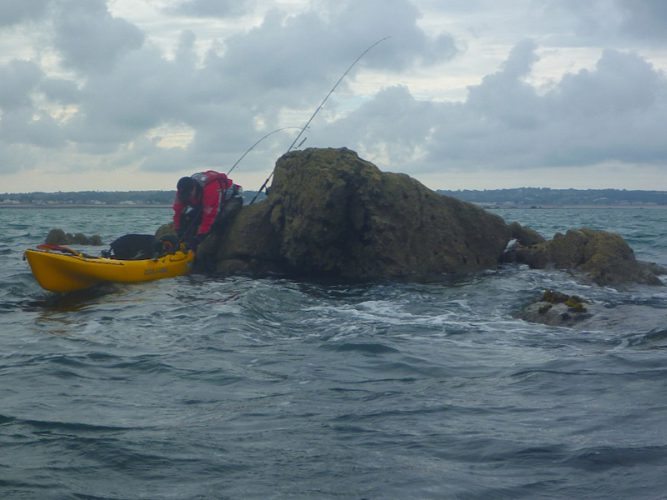 Conditions at sea can and do change rapidly and the ability to adjust and improvise is vital. Our group have left their kayaks behind on reefs at night while marks are further explored on foot. This is not something that is done with out due care and attention however. The boats are waypointed and the state of tide noted, while we might opt to walk another mile away from the kayaks on a given night. You have to time things with SAS-like precision, synchronising watches and making sure that the kayaks will not be washed away when you return. It goes without saying that anything less than 100% attention to detail in this situation could prove very dangerous indeed.

I am fortunate in that I have access to ground that’s vast and it is hard to relate to those who haven’t seen Jersey’s major tidal range first hand. Much of this is inside three miles, but other offshore reef systems and islands lie beyond, and all within the reach of specific kayak types.

We might choose to make the five-mile run to Les Echrehous or to push 14 nautical miles to Les Minquiers for example. But there are masses of rock and reef fishing opportunities besides, with tidal streams begging to be paddled and fished both by day and night. Only the foolhardy would attempt such feats without good experience, backup, support, training and the right equipment. Effort equals reward, and there’s no luck attached to catching upwards of 1000 bass in a season. The fact remains however – the only way that you’ll ever really get your head around what we do here is to try it for yourself. 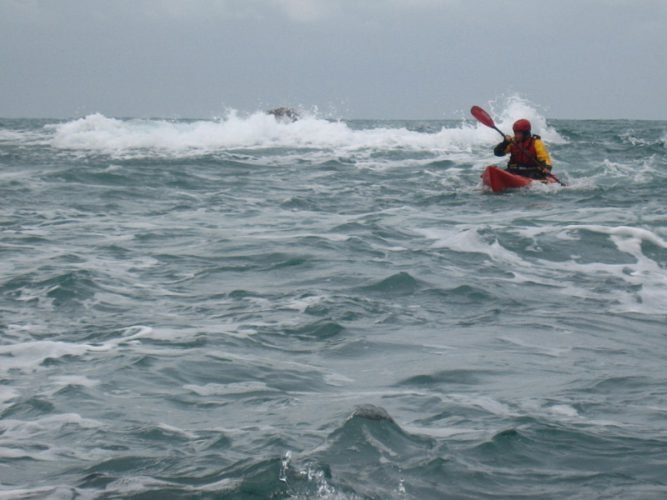 In finishing, I would point out that my friends and I used to be of the opinion that we were anglers first; intent on utilising kayaks for fishing as simple a means to an end. Alas, such thoughts are unwise and operating a kayak safely and efficiently anywhere is not so straightforward. With hindsight, and to a man, we are glad we had the foresight to undertake training to address the waters we now fish. Kayaking skills at least equal to BCU 3-Star or above are a very solid kayaking tool kit from which to draw. These skills have made us safer, and not just that, they have unlocked doors to a world of fishing that we simply wouldn’t have accessed otherwise. There are specific kayak and kayak-fishing safety courses now being run by the BCU and the Angling Trust. I strongly recommend that anyone attempting kayak fishing described in these features seeks guidance from experienced people, or undertakes appropriate training from a qualified centre. Always remember, no fish is ever worth risking your life for.