Ireland Youth international shore angler Eric Gasparro begins a regular shore fishing column. Here he fishes a match at Kilgorman in County Wexford and decribes some of the lows and highs of fishing for points.

After all the hard work that went into last month’s inter provincial fish offs, which decide the Irish Youth and Junior teams to compete at the annual Home Internationals Shore Championships, attention now switches to trying to earn a place on the respect provincial teams – Leinster in my case. 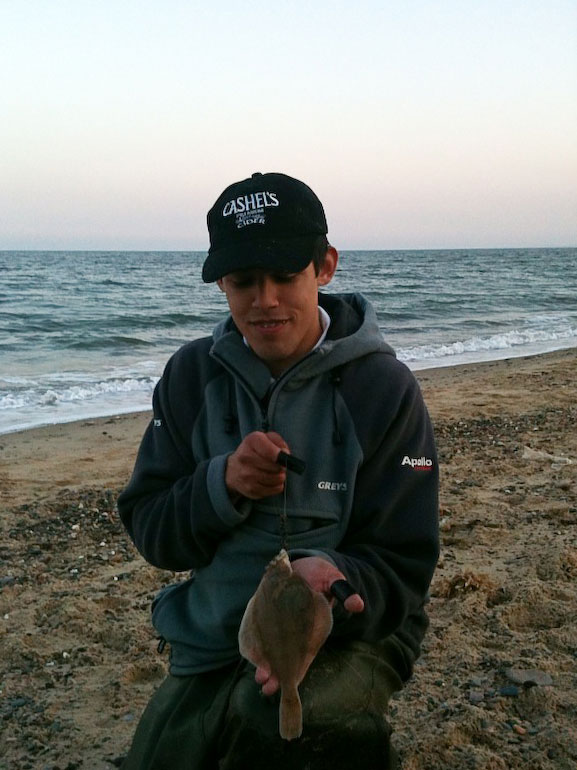 The Leinster Junior and Youth teams are picked on a league system of 4-hour matches. There are six matches in the league series, with each angler’s best four results counting for the league. The top five of each respective league – that’s under 21s and under 16s – make up the teams to compete at the annual inter-provincial event, while additionally, the winner of the league automatically gets the captaincy of the team. Rules for the competition are simple: it is fished to pegged, measure, and catch-and-release system. All fish over 15cm minimum size count, plus 5 fish points. The first five undersize fish are awarded 5 points plus 5 fish points. To make matters easier for the juniors to obtain bait, only readily available lugworm, fish baits and all shellfish baits excluding crab can be used.

It seems like a lifetime ago when I first dawned my boots at an under 16s event, but even now in my final eligible year for qualification for the youth team, I still get the same buzz of competing head-to-head with other anglers, many of whom have become good friends. I am forever indebted to the likes of Peter Flahive, Tom McAdam and Eamon Forgarty for putting the time in and helping me become competitive at match level. Lessons like bait presentation, watercraft and casting would have been so much harder learned, and maybe not at all without them.

The first leg of this year’s league was to be fished on Kilgorman in County Wexford. It’s a long sandy beach which can be kind or nightmare cruel depending on conditions. Kilgorman is a beach of discernable features, and learning to work them is often the main difference between success and failure. For example, a long sand bar runs parallel to the beach at around 80-90 yards out, and between it and the shoreline lies a deep gulley which often holds enough fish to get the angler through the comp. 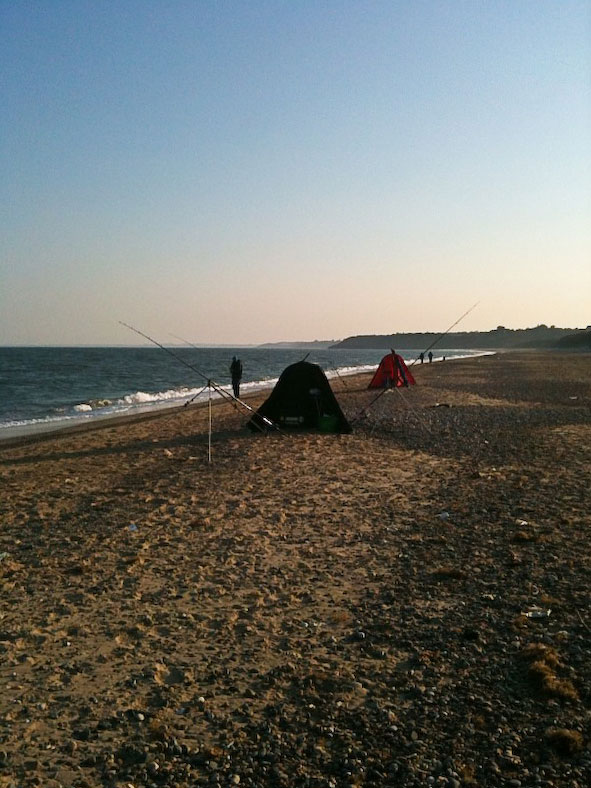 On a rising tide into darkness, during the late summer months, the venue can be stuffed full of dogs with variety in the shape of quality smoothhounds, ray, gurnard, huss, and occasionally, a rogue tope or two. April during daylight is most often a different matter and to make matters worse a dirty south easterly was cutting the sea into a dirty uninviting chop. As the prophetic saying goes: ‘When the wind is from the east, the fish bite least’. Sadly this foreboding mantra is all too often uncannily accurate.

The sea had taken on a horrible greeny-brown hue which is the kiss of death over in Ireland. The sight of this didn’t fill me with confidence but you can only fish what’s in front of you, so I resolved to get on with it. I had drawn peg 7, which meant a short walk, and just as well, as I had left my trolley at home. Call me vain but a 20-year old dragging a trolley just isn’t right! I could clearly make out the sand bar from my peg. The water immediately over it carried a different browner tinge, while the same could also be said for the shallow ground before it drops off into the gulley. At least picking out features and accurately casting to them wouldn’t be an issue.

Pegged next to me were Ger Doran and Ian Flood, two former Irish international anglers, so I had to be on my toes. I set up my familiar base camp, trusty Sensas bucket, battered Ron Thompson beach buddy and all, and went to work.

Daylight tactics for this early time of year are straightforward. Following the departure of the coalies and codling, and while the rest of the summer species haven’t yet arrived, there are only really flatfish to fill the fish void. We were however fishing into dusk so perhaps an odd dogfish would put in an appearance. 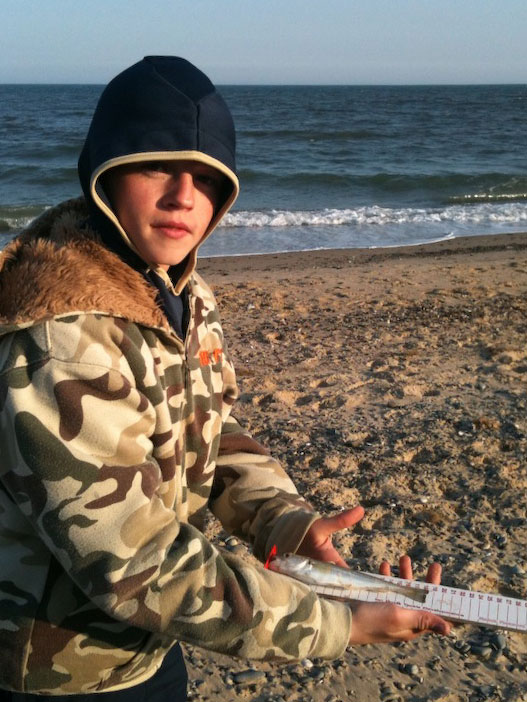 My focus was firmly on flounders and dabs. I opted to fish with a three hook flapper with 24in 0.30mm Tubertini Gorilla fluorocarbon snoods branching from a 0.45mm Grauvell Supernatural rig body. Hooks were Size 4 Kamasan B940M match hooks, with little 6mm Gemini floating beads set behind them to complete the rig. My rod was an Ian Golds FX-S which had recently been rebuilt in shocking pink… yes pink, because only real men and nudists have the balls to parade about in the pink! My reel of choice was a Shimano Biomaster XSA loaded with 30lb Whiplash Crystal braid. Baits was obvious in the circumstances, with gutted blacks and common blow lug tipped with mackerel most likely to bring results.

I cast where the gulley met the shallow brown water in the hope of a locating flounder, and the rest of the field seemingly applied a similar tactic. Knowing it would be slow most left the first cast out for 20 minutes before winding in. Ger, pegged next to me, took an 18cm flounder on his first cast which fell to lug tipped with a thin sliver of mackerel. Like most of the anglers, my own first cast came back as fresh as it went out with the baits untouched.

I kept chipping away, varying my distance and fishing different spots, including the gutter and gulley, as hard as I could. With a small rub kicking in as the tide crept up I tried various different styles of leads to harness some movement, but my best efforts were proving fruitless. Further along the beach, the under 16s were also having a tough time with an aggregate of only one small whiting among them.

With so many people fishing in close and reaping no rewards after two hours, I had a rethink and changed tactic. I hoped the far side of the bank would hold a few dabs now as the making tide rushed over it. I swapped the Goldsy rod for my trusty Daiwa AWT 13M and Daiwa 7HT Mag reel, and baited 3-hook loop rig with 0.35mm Tubertini Gorilla snoods, 60lb Suffix Superior body, size 4 Kamasan B940 standard Aberdeens and a single floater on the middle snood. Bait this time was stinky lug and wraps tipped with fish.

No sooner had I buried one out over the bank than Ger launched his own dab assault. I popped the rod back in the stand and noticed one of the juniors land what turned out to be a flounder of 27cm from more or less under his rod tip. To my dismay, Ger then pulled a whiting of 20cm and I found myself two fish behind. Trying to make things happen, I went to a 2-hook rig made with a sliding bottom snood. This way I could fish a flier in the gutter and hopefully sneak a flounder out.

The hardy anglers plugged away for scant return. More or less everyone was fishing at distance going into the last hour-and-fifteen minutes. Ger gleefully reeled in a giant 25cm dab, and I could only smile in dissatisfaction as I signed it in. I worked the home straight hard, determined to get any fish on the board and avoid a blank.

I started to vary my baits; adding razor and sandeel into the mix. Try as I might it seemed hopeless, and insult was added to already painful injury when Ger slapped me with his second dab. The only consolation was that he was only man in our section to have any fish, so I wasn’t alone in the fish-less situation. With an hour to go I lifted into a bit of weight which I timidly wound in. The sliding flier came out of the water fishless, but as the end gear came through the wave a lovely little dab clung on having taken a bit of frozen black tipped with a section of sandeel. It only measured 21cm but beggars cannot be choosers, and I wasn’t complaining as Ger this timed signed for me.

Fire in the Belly 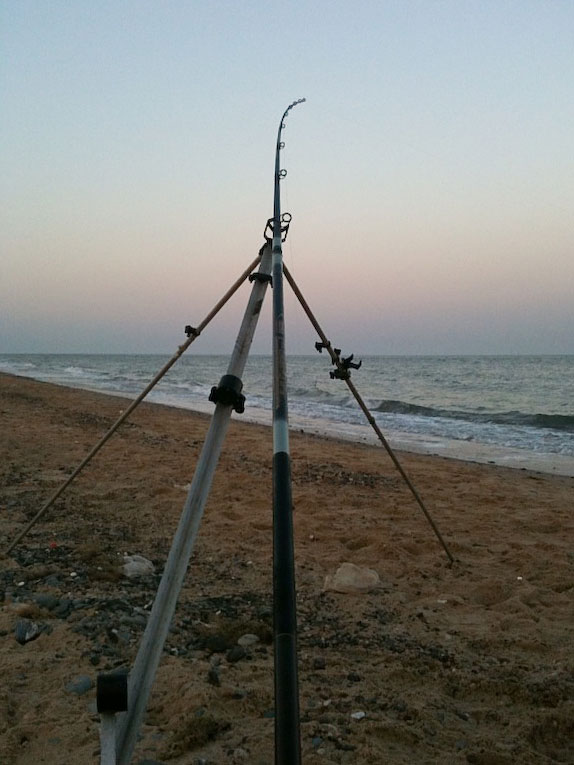 It’s amazing how catching a fish can instantly put the fire back in your belly as if by magic. With 45 minutes remaining I knuckled back down. It would be hard to claw back a three fish deficit… but not impossible. Ian, fishing to the left of me, eventually broke his duck with an undersize flounder of 14.5cm… talk about rubbing salt into his wounds.

I was happy to see Ger reel in another blank cast. Distance tactics were no longer producing and I went back to my original rod and reel for the last three casts. I flicked out three flapping hooks, hoping, no praying, for a valuable flounder.

There was a good run of tide now, and my plain lead trotted along perfectly. Perhaps predictably the first two casts returned a big fat zero. I changed to a 4oz ball lead for the last cast and whacked the flapper out as far as I could before planting the rod back in the rest and letting the tide do its thing. Within 5 minutes the tip danced to the tune of a doggie. It wasn’t expected and I tried not to let my shock show. I let the bite develop, hoping too that other fish would find the other two hooks.

At lines up I bent into a considerable resistance and gently set about winding it ashore. Ian brought in a counting flounder before I landed my fish, so the attached dogfish was vital if I was to secure 2nd place. All too often I’ve seen doggies decide to let go of the bait right at the edge, so I didn’t relax until the fish was safely on the beach. It scored 55 beautiful points and boosted my final tally to 86 points and confirmed my second place. Ger enjoyed a comfortable win with 104 pts, while Ian finished a credible third. On reflection it was hard fought day at the office, but with the first leg out of the way I can now look forward to the next match on Wicklow north beach, which should, weather permitting, produce good bags of dogs and flats.

For more from Eric Gasparro and his shore match fishing exploits check out his regular blog here.

Beat the early season blues with a beautiful bass