Mullet fanatic Steve Walker reveals all about catching his favourite fish from the beaches and rocks around the beautiful Isle of Whithorn in south-west Scotland.

Although mullet are present in the rivers of industrial North-east England, each year I make extended annual trips to fish for them in the more idyllic scenic surrounds of the Isle of Whithorn. Factor in several other hard-fighting species not commonplace on my doorstep, and these summer sorties are my idea of paradise.

While bass become more widespread in northern areas, grey mullet are becoming persistently more localised. And away from obvious harbours and outfall pipes, mullet, thick-lipped in this case, are much more difficult to locate with consistency. Although double-figure mullet run the Whithorn area, the average size is around 4lb. There might not be the numbers there were back when I first visited in 1979, but some years they still appear en masse to crowd the local harbours and sheltered bays. 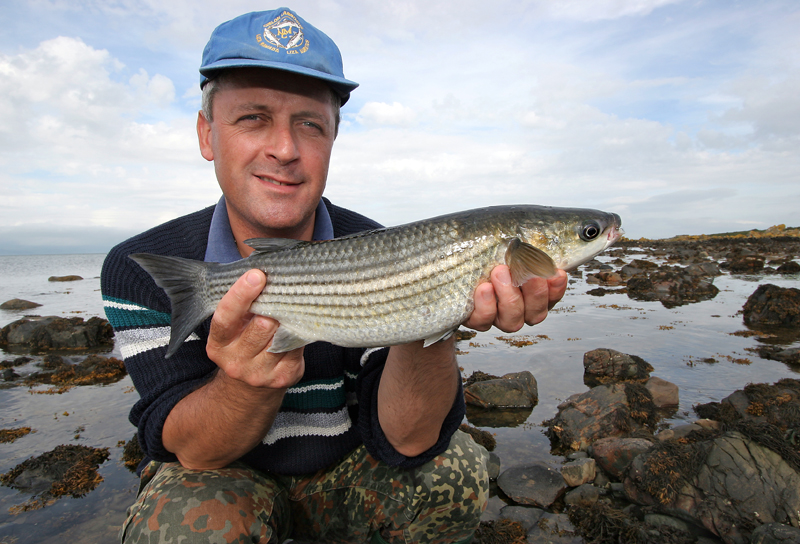 If I know reasonable numbers are present – typically in calm, settled conditions – then I like to dedicate a full day to fishing for mullet: flitting from mark to mark trying to pick off a few bigger specimens. But I also carry a carp rod and a few lures and floats to try for bass, pollack, or mackerel while I wait out the first hour for my groundbait to work its mullet magic.

Whatever I am fishing for, I spend a great deal of time scanning the water and for fringes signs of mullet – perhaps a ghosting grey shape, or the quick flicker of a dorsal fin on the surface. Mullet are very difficult to see unless they are on the top, and most anglers would be oblivious to their presence, even when they are right under the rod tip. Float anglers focus their attention on the float, waiting, wishing for it to disappear; when bottom fishing, eyes are trained on the rod tip, not beadily scanning the jagged fringes of those typically Scottish rocks for moving mullet. 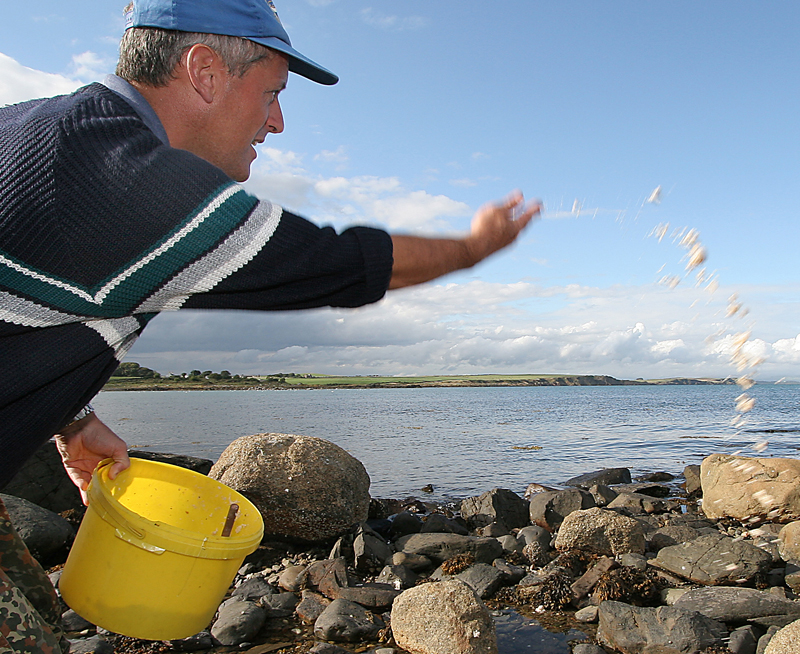 Float-fished baits intended for other species often produce surprise mullet. I have had several on ragworm and mackerel strip intended for pollack. But these unintentional encounters give false impressions of a mullet’s true fighting qualities because heavier tackle suffocates their abilities to fairly resist.

It is near impossible to cover all Whithorn species and methods in the same session because of the array of different gear needed. Even if you had three pairs of arms and could carry it all, the long yomps and steep climbs down rock faces would do you in!

On top of your normal mullet tackle, a big bucket of groundbait, several loaves of bread, and an essential landing net are required. A few ragworm wrapped in paper and kept in your rucksack will produce pollack and wrasse on float tackle. Mackerel can always be expected and can be chopped and added to any groundbait. Float-fished or free-lined mackerel strip produces mackerel and pollack. 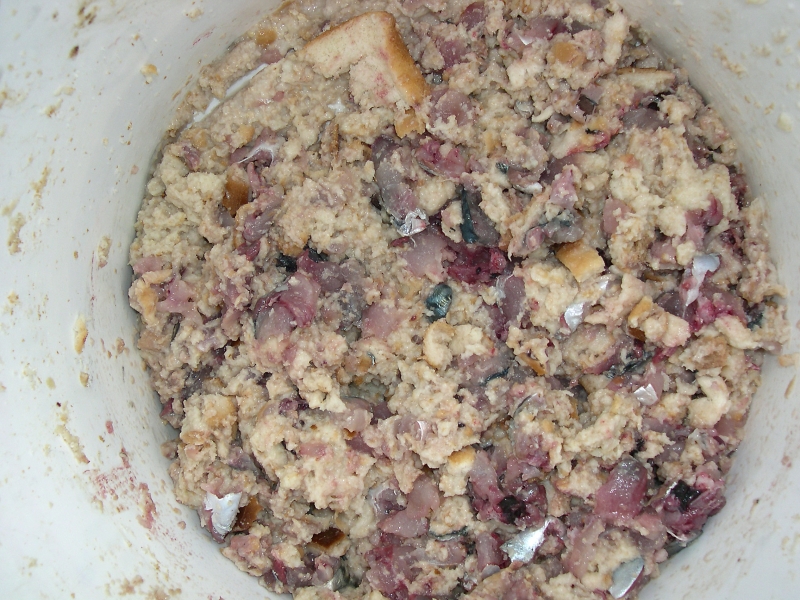 Groundbait is prepared before I go. I crumb several loaves into a large bucket, add some bran, and compress the dry mixture down hard. When I start fishing, I add a few tins of cat food and a couple of chopped mackerel, before adding sea water and mixing thoroughly with a wooden kitchen spoon. You don’t need to work mackerel into the groundbait mix but I prefer to. I generally put more mackerel into the groundbait when fishing from the rocks and use less when fishing from the beaches. Ground baiting does not just attract mullet. Mackerel, garfish, dogfish, and most other species are attracted. Small pollack and wrasse go mad for it and I have often seen dogfish come up to the surface and take it.

Although it is possible to catch mullet on the first cast, it often takes a few days of ground baiting to get them feeding freely in a particular spot… this means lots of groundbait. For a week’s fishing I bring 30 loaves of cheap white bread, plenty loose bran and several tins of cat food. I then rely on catching plenty of fresh mackerel to add to all of this. 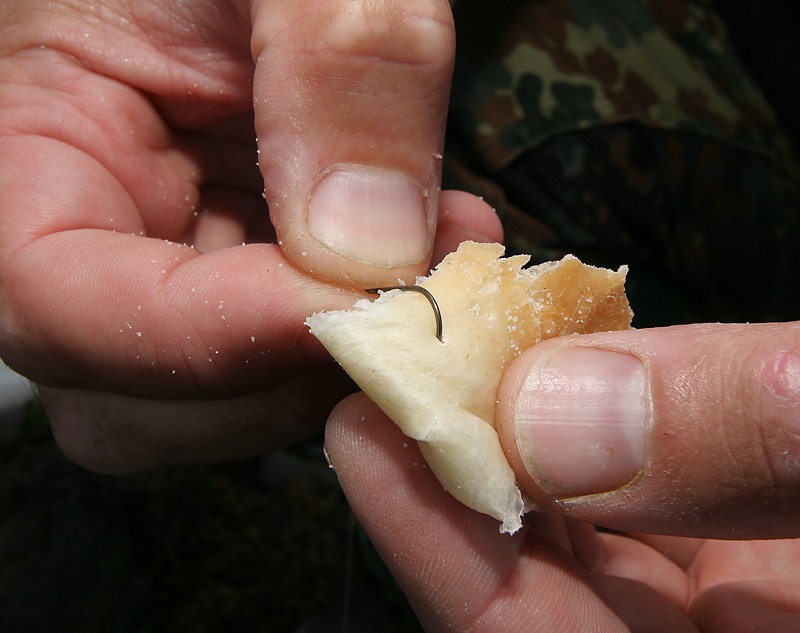 Cheap dry bread is okay for groundbait, but for hook-bait you will need to use a quality white bread that is doughy and moist enough to be moulded around a hook. Make sure to keep any bread bait securely wrapped inside a plastic bag or lunchbox or it will quickly dry out and become useless. Bread and mackerel are the two main baits to use. As a rule I generally float-fish bread or mackerel from the rocks. Floating crust can be used to good effect from the shallower beaches. When cutting any mackerel up I cut the belly into the same sized small chunks that I would use for a hook-bait. That way if I do decide to use mackerel for bait, any mullet present are already used to seeing it.

12 hours of solid mulleting is not unusual for me. Dehydration has caught me out in the past and I now always carry plenty to drink. A few pints in the Steam Packet pub at the Isle after fishing can turn into a massive hangover later if you’ve not had plenty of fluid to drink beforehand.

There are two different types of mullet fishing around Whithorn: you can either fish off the rocks into deep water, or from the shallow beaches topping the various bays. Mullet can be very localised depending on the state of the tide at various marks. Over the years I have worked out a circuit of different marks to fish at differing times, allowing me to target them all day when the weather permits safe access. 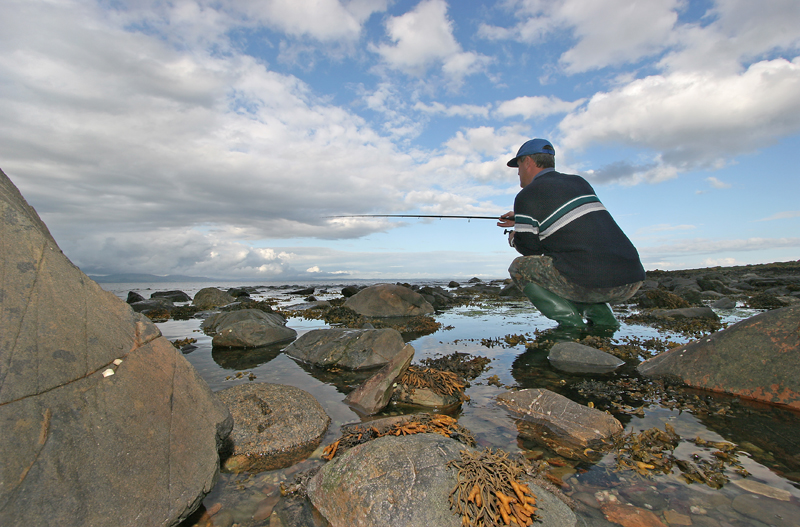 Typically, I would begin fishing at low water in the local harbour, and move to three or four other marks before the last of ebb tide. Hoofing from mark to mark is not always necessary of course, as sometimes the mullet hold in one area, and there is no point moving with fish feeding right in front of you.

Mullet are generally easier to catch from the rocks, but access to the water’s edge can be tricky, and landing one alone can be difficult even with a long handled landing net. It’s best to try to locate a suitably safe place to net any fish at the start of the session. Even if I am fishing with someone else I still prefer to land a mullet by myself, unless it is a particularly big specimen. Soloing a big mullet is fishing at its purest.

I use a 13ft match rod, a small fixed spool reel loaded with 8lb line to a 5lb fluorocarbon trace. For float fishing, I use a 2BB shot loaded waggler, and attach the trace via a tiny swivel. I use a size 10 specimen hook and rely on the weight of the swivel and a single split shot to slowly sink the bait down to a pre-set depth – usually about ten to twelve feet. This is a good method in very calm conditions as it gives the bait a very natural flowing movement. In slightly choppier conditions I will use additional shot as appropriate, or switch to a heavier float and more weight so that the bait does not move around too much. In such conditions, if the bait is too ‘free’ lots of missed takes will result. By the time a take registers visually on the float, the fish has already rejected the bait. I have seen mullet take my bait and swim off with it without even moving the float, simply because the contact between bait and float has been too light. However, the shallower you fish the less of a problem this is.

If the mullet are just sub-surface, or taking floating crust off the surface, it is possible to catch them by ‘dappling’ a bait in front of them. This is a thrilling way to catch mullet: watching them move towards your bait, just about to take it, only to turn away at the last possible moment because it doesn’t ‘feel’ right. Lift the bait out of the water place it in another location so the fish think it is a different bait, and try again. To watch them take your bait into their mouths and then strike and miss them is a heart thumping and very frustrating experience. 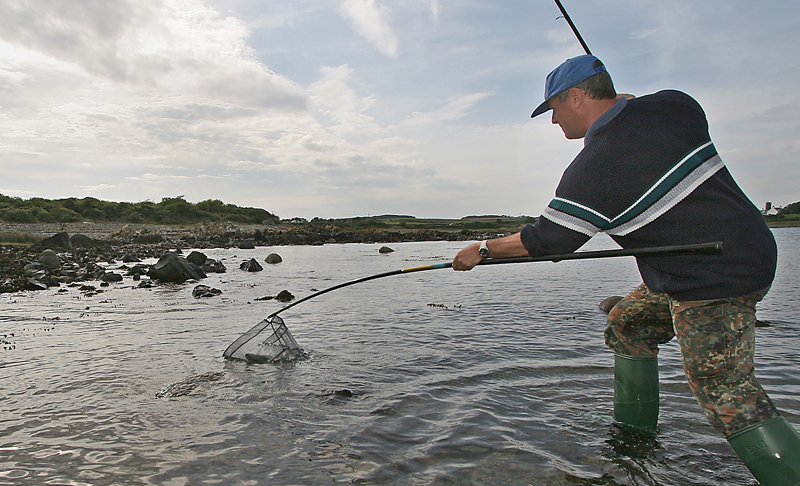 Once hooked, and realising that something isn’t right, Whithorn mullet typically splash around for a few seconds then zoom off along the rocks or out to sea. I always fight a mullet on the drag, and play them lightly if they stay on the surface… and a 20-minute fight is not unusual before they tire and can be safely netted. The only time to put a bit of pressure on is when necessity dictates keeping them away from dangerous rocks or kelp beds.

Stalking mullet from the many shallow beaches in the Wigtown Bay area presents more of a challenge. Fish location is a problem, as they are very difficult to spot in anything but very calm conditions. Sometimes all you might see is the fleeting glimpse of a fin tip or tail moving around the weed and boulders on the edge of a flooding tide.

High water springs are the best time to beach fish, when mullet move into the mud holes and narrow channels amongst the tidal margins and sea grasses. You will need to put plenty of groundbait out, and be careful not to spook them. Any unusual noise, a shadow on the water, or a silhouette against the skyline will scatter them instantly. Always be aware that sound travels more than four times faster through water, and even the crunch of your footsteps over any shingle or boulders will be noticed by any fish. Never underestimate how close mullet, or indeed any other fish, will move into the shoreline, they can often be seen just a few feet out in just three or four inches of water as they push inshore on a flood tide. They will see you before you see them unless you take care and sneak up on them carefully. 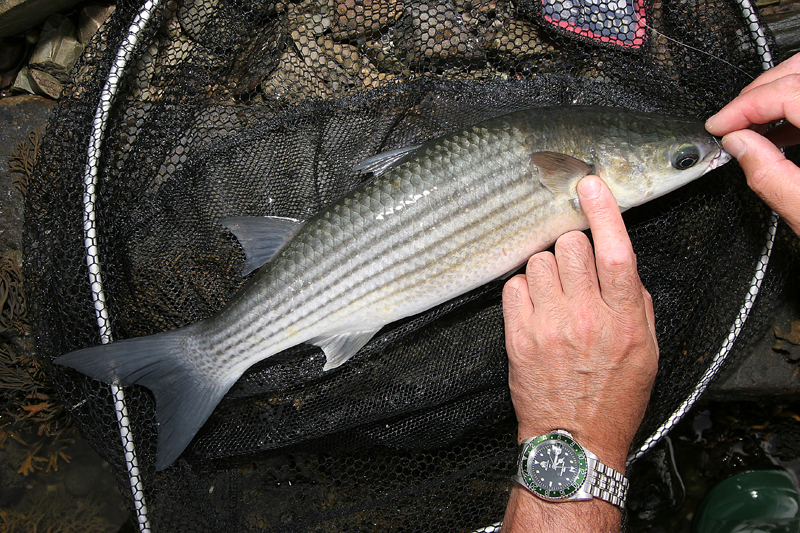 Bright colours spook fish in clear water conditions. I always wear camouflage clothing and creep about so as not to scare any fish. One time I was so well camouflaged amongst some tall grass that a deer had ventured out of a nearby forest and was within twenty metres of my position.

Beach gear for mullet is the same but without the float. In shallow water, a piece of floating crust flicked out on a leger rig with a tiny piece of lead wire as a weight is my preferred method of catching them. You cannot mistake the splash and swirl of a mullet as it takes your bait off the surface, but takes are easy to miss.

Sometimes they will nudge the bait as if inspecting it, or deliberately bump it displacing small pieces. But when you do eventually hook one like this it is unforgettable… they go absolutely mad, and in shallow water the only place to go is out to sea. In this instance you get some fantastic runs even off smaller fish. 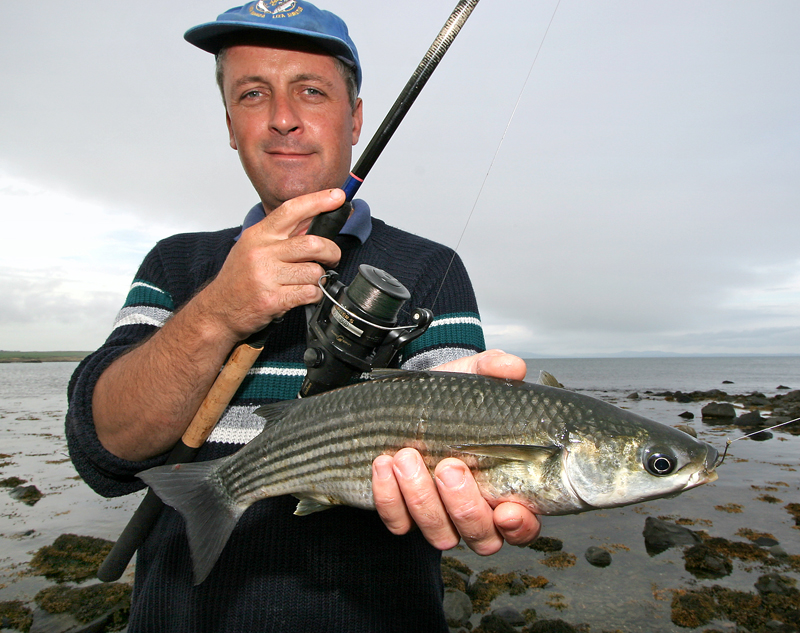 My partner’s son, Jamie, caught one from a beach mark a few years ago weighing a little over 8lb, which took over an hour to land. Getting your line tangled around weed or boulders is the only problem likely to be encountered, and it makes sense not to fish close to any obvious snags. Coating your line with a floating agent is a good trick and certainly worth doing.

Naughty reels get the strap