The Home Nations event is one of the most prestigious competitions a UK or Irish shore angler can aspire too. To represent your country in any sport is honourable and I have to admit each time I put the team blazer on I feel an immense sense of pride and achievement. All the hard work and effort that was expended to earn such a right is most definitely worth it. Thankfully some 10 years ago, a decision was made to include junior and youth teams into the championships. It’s given young anglers like me the chance to fulfil our potential and make new friends from shores afar. Every year the competition is moved around to each of the four home nations. This year Scotland played the amicable host and based the championships in the Peterhead and Fraserburgh area. 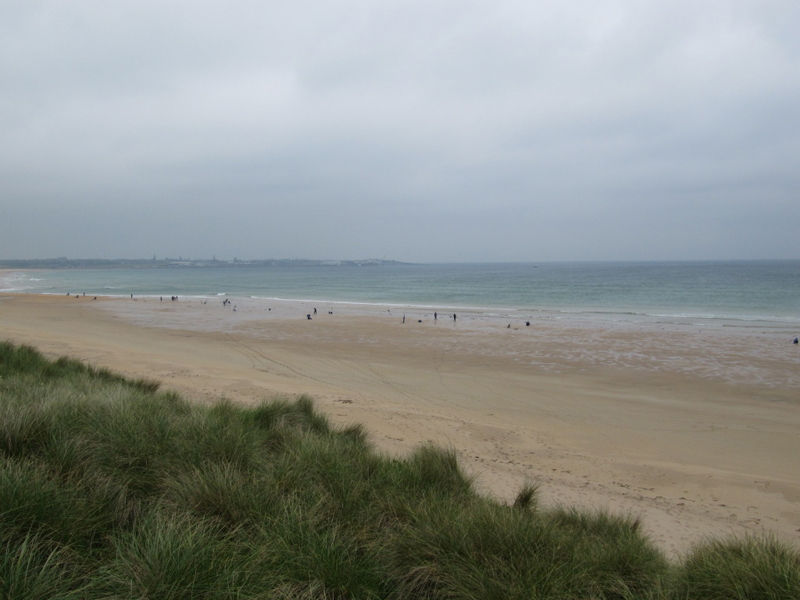 It was an early Wednesday morning when team Ireland made their way onto the motorway, bound for the port of Larne. I have to admit I am not a morning person; I really struggle to get out of my cot every time someone asks this arduous task of me so it will come as to no surprise that I spent the majority of the three and a half hour drive fast asleep. We made it to Larne for around half eleven and met up with the rest of the team, seniors included. After a brief ferry ride to Loch Ryan it was now time to come face to face to with the worst part of the journey. A 6 hour plus marathon to Peterhead itself was necessary to finally get to the hotel. Thankfully once again I could sleep my way through the ordeal. We finally arrived knackered at the Waterside Inn for around 9pm after one bloody long day. There wasn’t much to do now but grab a quick pint and settle in for the night. 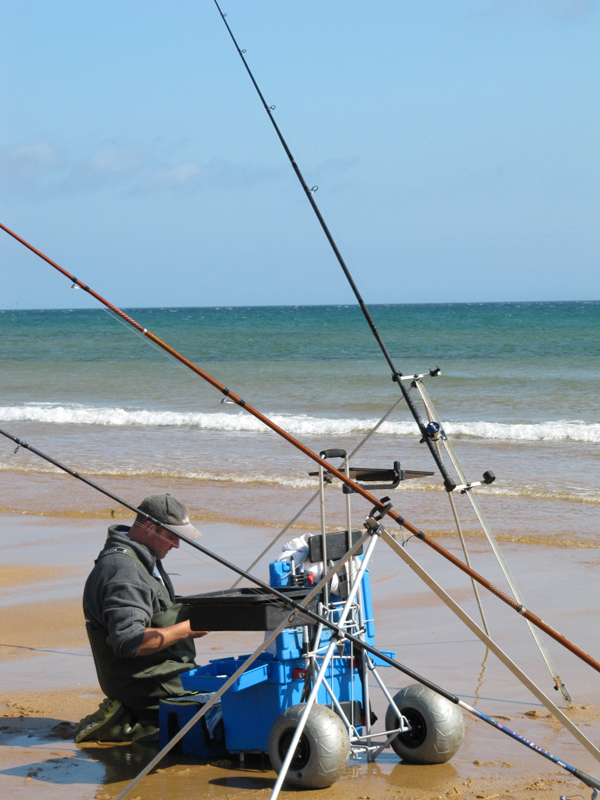 One quick glimpse out the window on Friday morning confirmed it was indeed a manky old, Scottish summer’s day filled with wind and rain. However I dragged myself out of bed as we had business to attend to; some all important practice and team tactics discussions for the days ahead. After a sterling breakfast Scottish style, we headed into Peterhead town to secure some bait for our planned practice session. Peterhead tackle shop will forever go down in my mind as one of the strangest, enough said. We had managed to obtain a few packs of blacks and mackerel, all we really needed to be honest. Our chosen beach for the day was to be Fraserburgh.

Slogging to the top of the dunes I could see an absolutely stunning beach before me. The water was gin clear, the sand was golden and the surf was inviting. It was almost identical to some of the beaches we have on the west coast of Ireland. We certainly didn’t feel like strangers, so I was eager to wet a line and get to know her properly. Today was purely about getting a feel for the place, we all had a few things we wanted to try out like snood lengths, weights, line strength etc… It wasn’t long before the local flatties were busy rattling our rod tips. The standard of fishing we had for the two hours or so we were there was pretty good. Even after missing the best part of the tide and having no fresh bait we had flounder to 40cm and turbot to 30cm, with Warren Brown having the best bag of fish landing eight flats. It was definitely a worthwhile outing to glean little bits of valuable info which were secured and stored away for later.

Upon return to the hotel we now had to come up with a game plan, it was clear long light flappers were the way to go. A good old rig tying session ensued making sure we had enough of what we needed. After that there was nothing more to do, we had covered every foreseeable variable we could think of. So we decided to unwind by the hotel pool for an hour or two. At 7pm it was time to don our blazers for the first time this year and attend the opening reception. With the job done we decided to call it an early night after a couple of pints and a frame or two of pool. 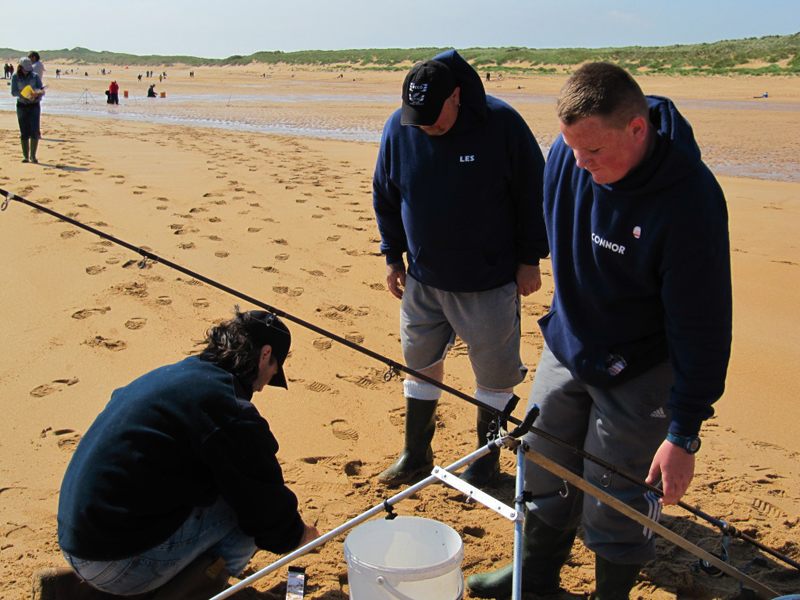 Saturday came around and the rain had been replaced with bright sunny conditions, an even stronger wind had built up and it was clear from the offset that it might be a tough day at the office. The Home Nations is a bait provided comp and this year we were provided with fifty rag, two packs of black lug in addition to two packets of Ammo mackerel. The first session was set for Scotstown beach, with all three participating teams, Juniors, Youths and Seniors, fishing this venue. I drew peg A2, the peg nothing for my confidence at all as I was faced with a sandbank, festooned with weed all over it only waiting to be re-floated by the incoming tide. The surf was also littered with large strands of kelp. ‘Oh dear’ or words to that effect, I muttered to myself. At ten o’clock the match kicked off and I lobbed a three-hook, flapper baited with two black lug tipped with mackerel and a straight mackerel strip just past the edge of the last breaking wave.

After the first cast the English and Welsh lads in my zone had each taken a flattie. The trend continued with all three anglers in my zone picking off fish here and there, including a nice double for Callum Richardson on the adjacent peg. I was really going at it hard but it just wasn’t happening. I alternated between watch leads, pyramids, balls and any other conceivable lead I had in my box. Snood lengths were varied from 18’’ to 35’’ and casts from the shallowest suds inshore to a decent belt. 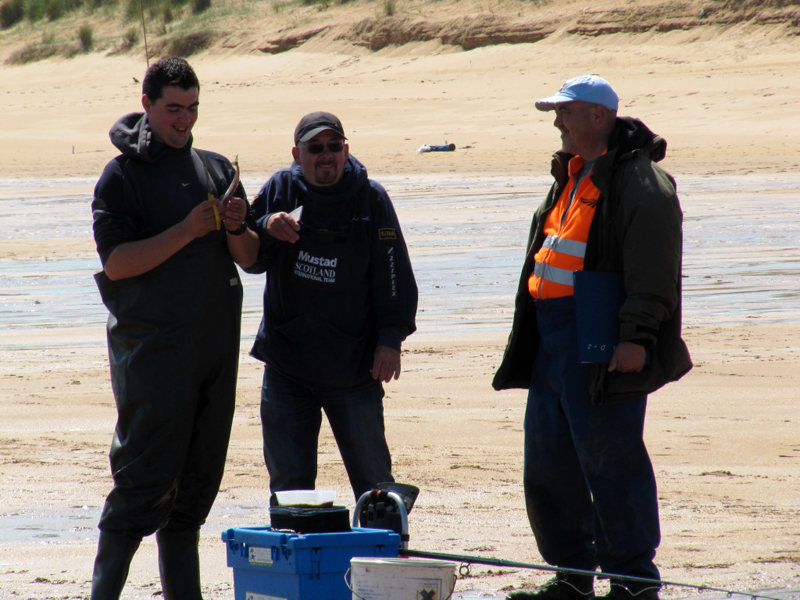 Try as I might all I caught was weed and plenty of it. Pretty disheartening to be honest when those around you are taking fish and in numbers too and my rod remained stationary other than the bend of yet more weed. As the tide crept up the fishing predictably died off and we were all condemned to fish a shallow, featureless sandbank. At lines up I had done the unimaginable and had blanked; the only angler out of all sixty fishing the beach! Luckily for me the scratchy nature of the venue had distributed the scores nicely with all four teams still in with a shout. So although I had let my team down there was still all to play for on day two. The Irish juniors had recorded an impressive day’s tally with four zone wins and a zone third to sit comfortably at the top. In the seniors it was the English who built up a first day lead. 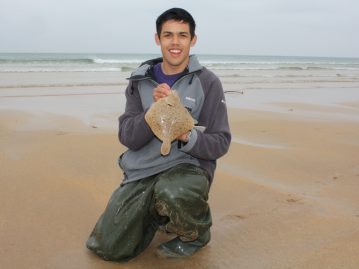 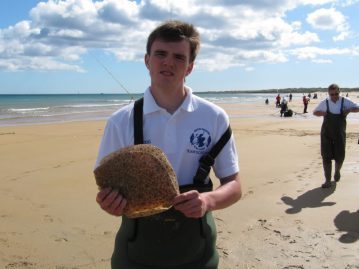 Sunday dawned and with it came the chance of a fresh start. I was determined to go all out and run riot to make up for the poor result on Saturday. Honestly speaking I have never been so up for a match in my life and I had it all to prove. The venue for today was to be Fraserburgh beach, the same beach we had practised on so we knew the score. The beach today was exactly as I remembered it, perfect. A gentle surf was rolling onto the sand providing what looked like ideal flatfish conditions. I really love fishing calm, balmy days when I can manipulate my baits and rigs with ease.

With the sea being flat I knew that movement would be the key to searching out hungry flats. Flounder in theory would be lying waiting to ambush moving baits rather than be out actively hunting. My rig was simple, a 0.18mm diameter Grauvell snood measuring one metre and sporting size 8 Kamasan B401s, a type of trout hook used for fly tying, basically a light gauge Aberdeen pattern. 30lb test Tubertini Gorilla Fluorocarbon formed trace body and a 1 to 2 oz pear lead provided the weight. First cast I lobbed the bait out and hoped for the best. Gently twitching the bait by hand it wasn’t long before my rod gave a lovely little rattle; the sense of relief was unbelievable! 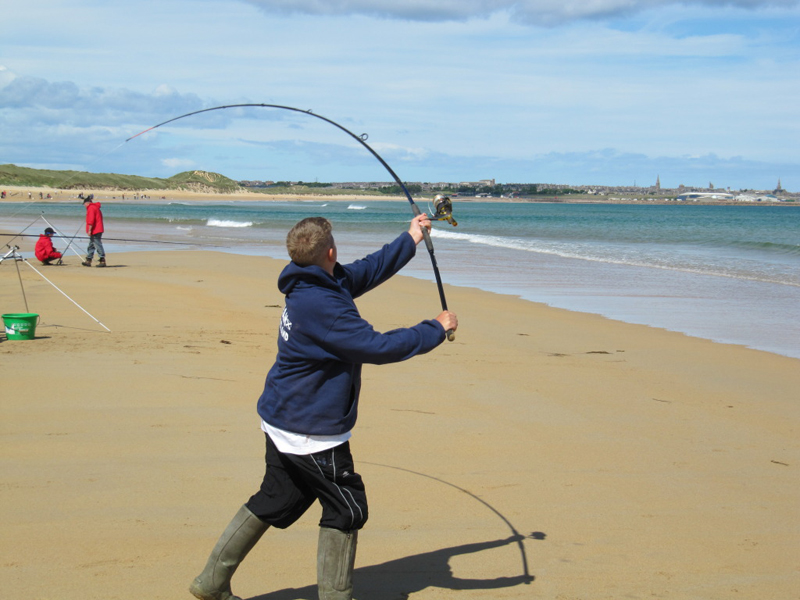 After getting my next trace ready to go I reeled in and low and behold a small but perfect 19cm flounder was beached and placed into the bucket for measurement. The Scottish angler in my zone, Greig Thomson, had a fine double shot on his first cast including a cracking turbot. My next cast was lobbed into a different section of my swim at about the same distance and was twitched again, another rattle signalled the arrival of a flounder and an identical fish was landed a few minutes later on frozen lug tipped with mackerel. The competition carried on in much the same vein with a fish coming every second cast or so. Luckily for me the rest of the zone was quiet so I was merrily on my way to securing a decent lead. News from the rest of the beach was giving a strong Irish performance with Chris Feeney, Warren Brown and Paul Whelan all in command of their respective zones with Ryan Williamson pushing for top spot in his section. As with most surf beaches once the tide reached the high water mark the fishing began to tail off with no fish showing for me in the last hour and half. Fortunately my earlier efforts proved good enough to secure the zone win. At lines up a flurry of fish for Robbie Taylor took the lead off Paul Whelan and Ryan was pushed back into fourth in his. But with three zone wins to add to their supporting scores we were hopeful that we had done enough for the gold medal. 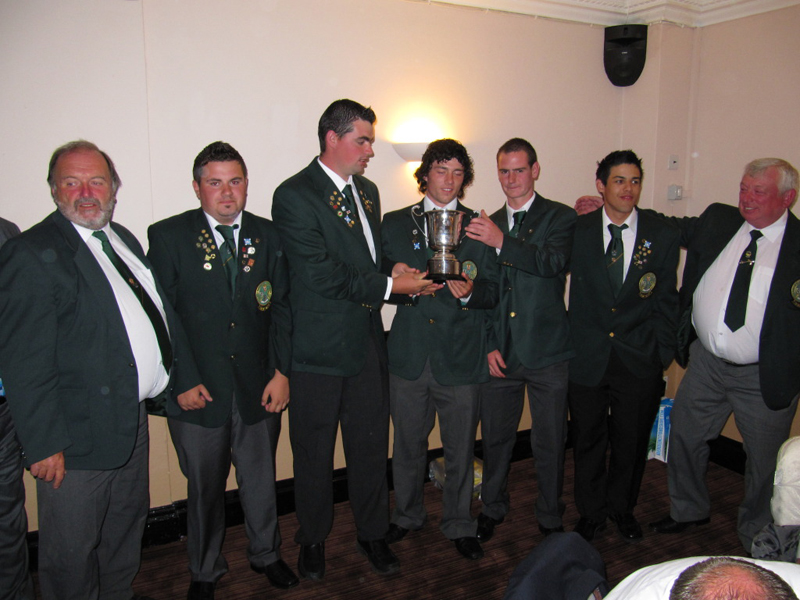 Arriving back at the hotel, the scores were tallied up it was confirmed we had taken the Youth’s gold and too make matters even better for the Irish contingent the Juniors had won the gold medals too. The feeling was euphoric to say the least. Having your name called up to receive the top prize is one of the proudest moments I’ll ever experience. Ireland had never won gold at Junior or Youth level so for us to do the double this year was a fantastic achievement. I’d like to formally thank the management team of Peter Flahive, Eamon Fogarty and Phillip O’Sullivan who all did a brilliant job relaying information to us and giving participants some tactical tips when we most needed it. Also thanks to the Scottish federation for running a top championship and providing first class bait. Until next year when the Home Nations returns to Eire, slan agus abhaile!

Latest Addition to the Weymouth Fleet