Mark Harding thinks global warming may be the reason for increasing numbers of Couch’s bream and notable catches of the same. Here the Alderney angler reveals his tips for rooting out this hard fighting and colourful adversary.

There is a forgivable tendency among anglers to become focused on the negative impact global warming might be having on our seas and our fishing. We are moving somewhat into the unknown, and we are nervous of evidence pointing to altering species migrations allied to change that is not entirely natural. Fish species once historically prevalent at given times of the year now appear in a muddle of confused months and lesser numbers. The other side of the coin is evidence of increased numbers of previous minority species, and even fish alien to particular areas altogether.

Change has occurred gradually over a period of years rather than overnight, and in many places it has become apparent that species relied on in the past cannot be banked upon as before. Of course, not every change can be laid at the feet of increasing sea temperatures but it would seem to be at the root of many inexplicable deviations. 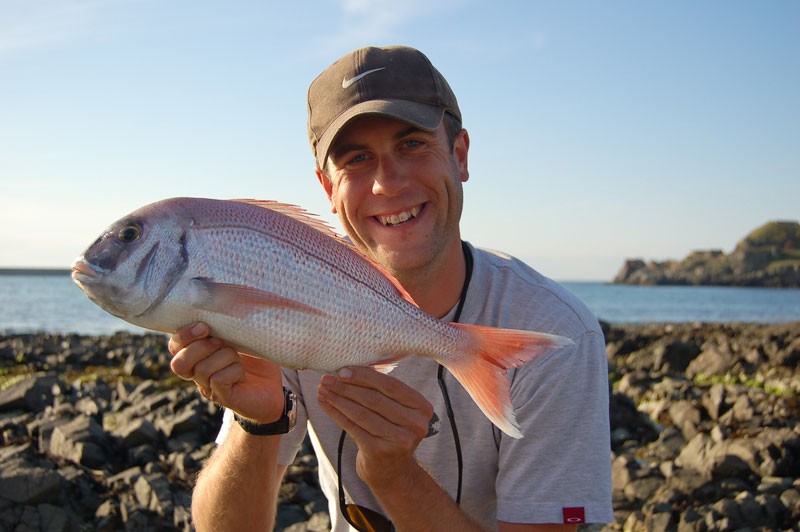 Once upon a time, the humble flounder abounded where I grew up in Portsmouth. As a teenager, there were so many flukes that many of the local anglers effectively cut their boat fishing teeth on them. It is a different story today, and the flounder has most definitely lost that ten-a-penny status and become something of a rarity. The question begs: Are rising sea temperatures a factor in the decline of the south coast flounder population? I believe so, although inshore commercial fishing activity has also been contributory.

Bass offer perhaps the clearest example of warming effect. Just look at how far north this specie has pushed in the last 30 years. We now hear of bass as far afield as the northern face of the Scottish mainland and Orkney… something that was just unheard of in my distant youth.

Uncertainty aside, there is no denying the new fishing opportunities arising from warmer UK seas. Tuna seem to be one that many boat anglers’ minds turn to, especially the seasonal fisheries around Ireland that have graduated from pipe dream to reality in recent years. Trigger fish have moved further up, through and beyond the English Channel, as have the likes of red mullet and the subject of this piece, the bullish and beautiful Couch’s bream. 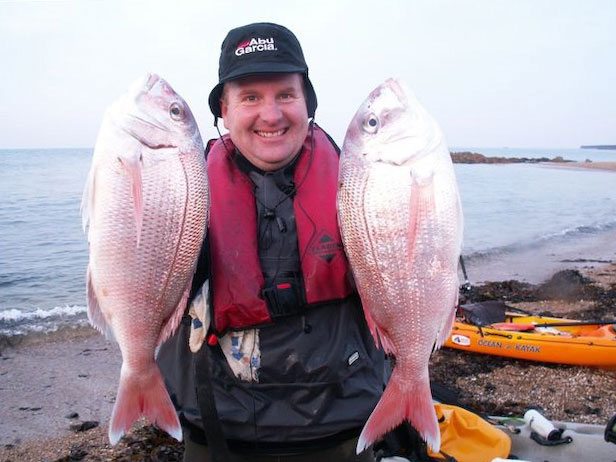 Terrific scrappers on light tackle; Couch’s bream are a lovely looking fish and superb eating. There’s a hint of red snapper about them, with those rose-pink flanks, that silvery white underbelly, and a dappling of turquoise-blue patches. Facially they display a distinctive blue band on the snout and either side of the eyes. The base of the dorsal fin is also tinged with blue extending tail-wards, and every pink fin is brushed with light blue. The head is concave like that of the gilthead, while the mouth is armed with strong, stubby teeth much like those of the ballan wrasse. The roof of the mouth is very hard.

Couch’s bream territories have been pushing further north for a number of years now, to the point where in the Channel Islands of Guernsey and Alderney, as well as areas along the coasts of Cornwall and Devon, you can target them specifically. There are in fact two known breeding areas off Devon and Cornwall. No doubt their territories poke beyond that in the summer, heading further east up the English Channel. Speaking as I find here in Alderney, they arrive early July, sometimes late June to boat anglers, before coming within range of the shore during August.

Their diet consists mainly of crab and shellfish, but they will also feed on small fish and worms, hunting in schools like other breams. They are found close to rocks but more accurately favouring the sandy patches surrounding them. Previous experience indicated Couch’s remained on the Alderney grounds until November, and maybe even December. This year however, we have encountered them during January, and the question of global warming poses once more. 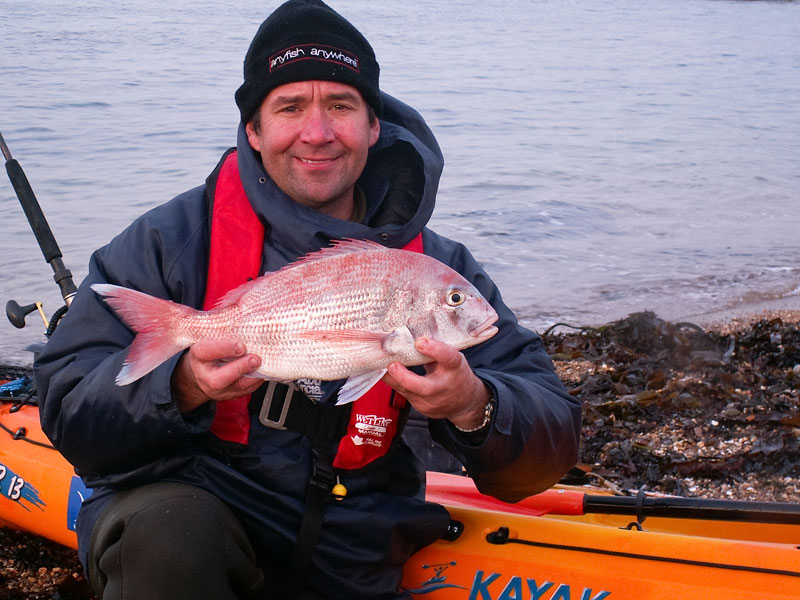 In the boat or kayak, most fish are caught off the bottom. Two-hook rigs with 25lb fluorocarbon snoods of 14 inches from booms positioned above the weight are recommended. Heavy as this may seem, it is necessary given that these fish are awesome fighters with the power and inclination to burst very light lines. Hard runs and thumping head shakes as opposed to the meeker rattles synonymous with black bream betray a Couch’s long before you sight it.

Strong size 1 or 1/0 hooks are advised. Mustad BLN hooks are a reasonable choice but avoid lighter wire alternatives like black Aberdeens, which aren’t up to the species. Best bait is English squid, with calamari, cuttle and fish baits all effective second choices. Cut the squid into 4-inches long strips. Look for strong tide around rocky outcrops surrounded by sand in depths of around 30 to 70 feet.

For some reason shore fish tend to be caught on worm, with squid a second favourite. Deeper marks tend to be best, as opposed to shallow sandy beaches. A two-hook flapping rig works well, and the addition of floating beads to give the bait some lift can be helpful. Once you have caught a Couch’s bream you won’t mistake the bite again. Typically a battery hard jabbing thumps and dogged resistance results in a compact little couches bream that an inner voice convinced you surely had to be bigger! 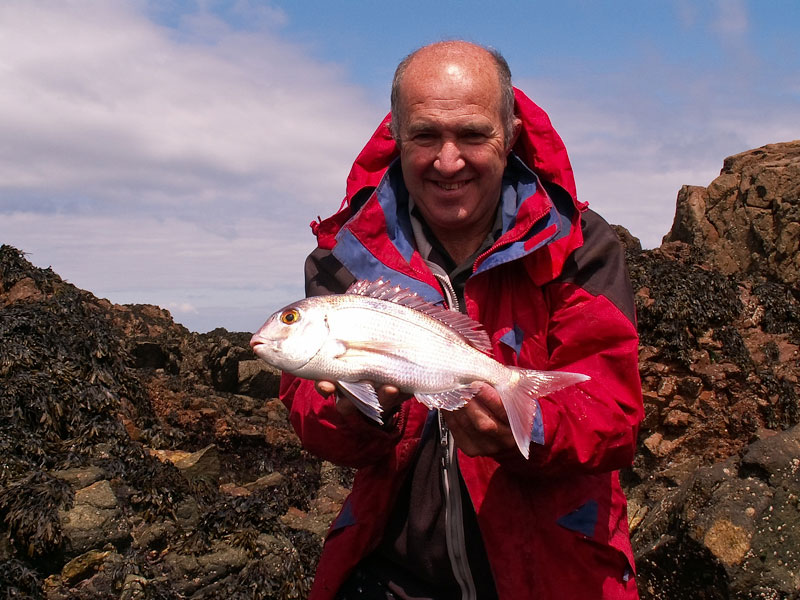 My experience is that not only are the numbers of Couch’s increasing and the seasonal availability stretching, but the size of fish is also notching upwards. The British boat record is now a whopping 6lb 9oz fish caught in Guernsey waters last year. This will surely be broken again and probably sooner rather than later.

Fish of a size once thought reserved for boat anglers can now be caught from the shore. A 3lb 4oz Couch’s bream caught from the Guernsey shore, and topping the existing 2lb 15oz record, is currently awaiting ratification. There are specimens in excess of 10lb just waiting to muscle northwards over the next couple of seasons. To hook and land one of those proportions would be exhilarating in the extreme! Who says climate change is all bad?

Tackle and baits can be bought on the island from Alderney Angling where you will also find the latest catch reports and mark information.