The picnic area on the east side of Loch Linnhe provides easy access to a comfortable stance with comparatively deep water within easy casting range.

The paths from the parking area at Loch Linnhe picnic area allow for disabled access and with care a wheelchair can be used right down to the rocky shoreline where there are a couple of benches. 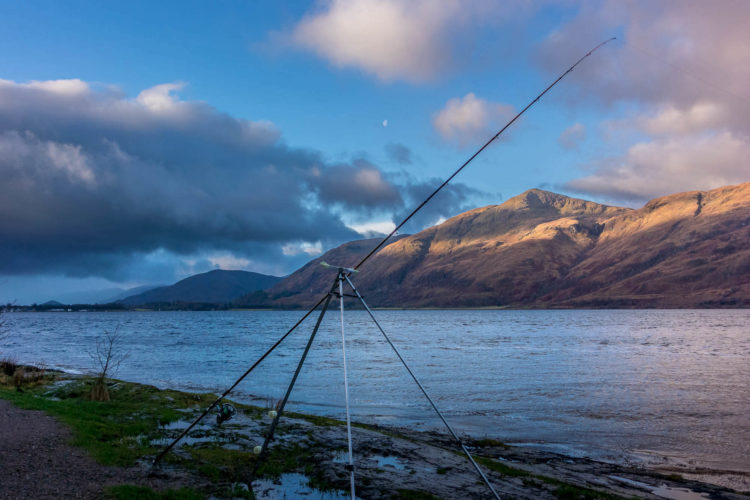 The area is popular with tourists and at times it can be selfie central particularly during the summer months. Winter time is quieter but you can still expect “Any luck?” questions throughout the day.

The hours of darkness are much quieter for those looking for solitude on the shore.

The mark is fairly sheltered from most wind directions but the area has a high annual rainfall.

How To Get To Loch Linnhe Picnic Area

Loch Linnhe picnic area is situated on the east side of the sea loch, two miles north of the Corran ferry slip.

From the south the visiting angler should take the A82 through Crianlarach and Glencoe following the signs for Fort William. The car park for the picnic area is clearly signposted a visible in advance from the south.

Anglers travelling from the north should take the A82 through Fort William, signposted Oban and Crianlarach, and the Loch Linnhe picnic area is seven miles from Fort William. Access can be busy given the amount of on coming traffic in the summer.

The rocky platform is impossible to miss, just follow the path down to the seaward side of the trees. There is a pebble beach area just to the north of rock ledge but this is a much shallower area than the water directly off the rocks.

The rocks and their grassy edges provide a stable casting platform but they can be slipppy when wet and they slope steeply down to the water along most of the length. 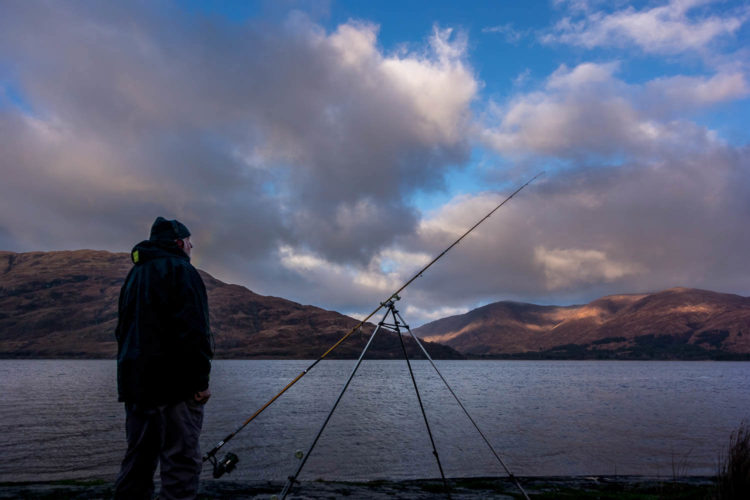 The platform is approximately 75 metres in length and can comfortably accommodate five or six anglers.

As previously mentioned Loch Linnhe picnic area is popular with tourists, even in winter you can expect dozens of five minute stop visitors down for a selfie. However, as long as the angler pays attention when casting, and stores the bait in dog safe locations, there is no problem with fishing even at the height of the season.

Fishing after dark eliminates the crowds and the platform is a secure venue at night, although care should be taken when landing fish close to the edge. The sheltered nature of the loch means that there little risk of large waves hitting the shore.

Lesser spotted dogfish are liable to be around in numbers with fish ranging in size from small pups to around the three pound mark. At times it can be difficult to avoid the dogs and even large baits and 6/0 hooks will be attacked with relish. Although they are a pain at times the numbers mean that it is an ideal venue for newcomers to the sport or juniors to fish and be kept occupied without periods of boredom.

Match anglers can also use the mark to hone their speed fishing skills. 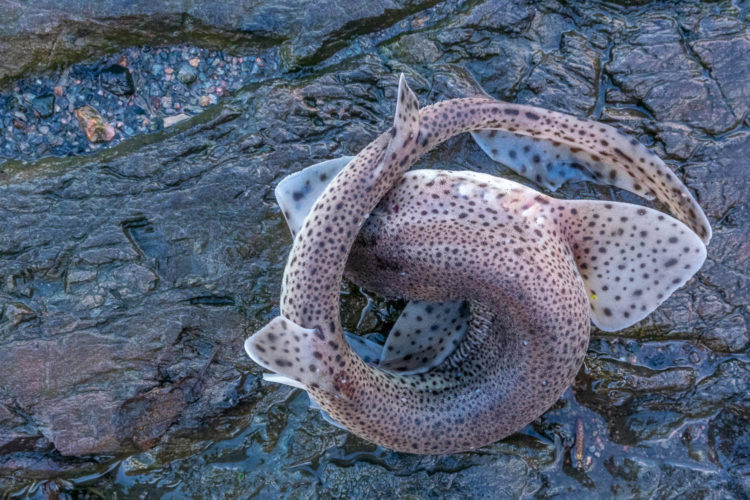 Thornback ray can also be taken here and small codling also frequent the area. If the dogfish can be avoided there are gurnards and whiting off the rocks too and the occasional wrasse and pollack can be taken close in to the rocks.

Scottish shore International Iain Graham states, “I’ve had good bags of whiting here also but they don’t always show, there have also been small common skate here. I’d suggest it fishes at its best late winter into January, which is strange for lesser spotted dogfish. During this period there will be several quadruple shots of dogs on three hooks, place must be carpeted with them. We have had some amazing catches there at this time.” 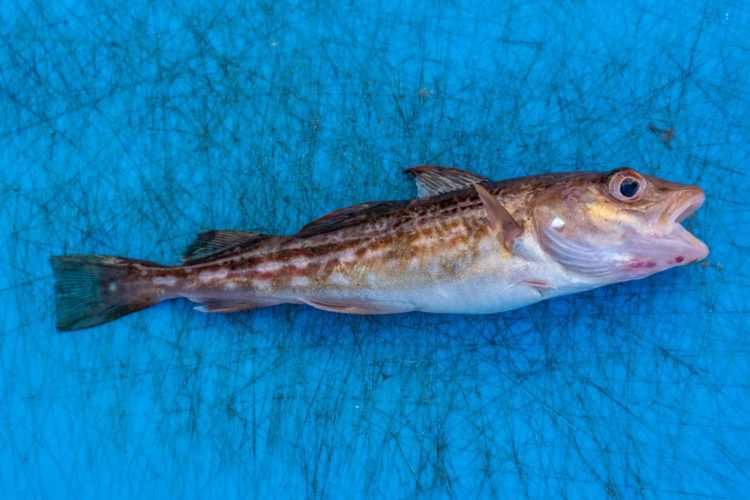 Shore crabs can be extremely active in summer and baits quickly stripped so it is wise to allow regular bait checks, a 15 minute soak works for me.

The seabed is consists of comparatively clean mud/sand but you can expect some snags particularly when winding back in through the weed on the fringes of the rocks. A beachcasting rod capable of handling 120-170 gm weights and bait will suffice.

To assist when pulling out of snags at the water’s edge, the main line breaking strain should be kept at the heavy end with a minimum of 30lb line being used. I favour 50lb braid on a robust fixed spool reel with a 60lb shock leader attached by a double Uni knot. 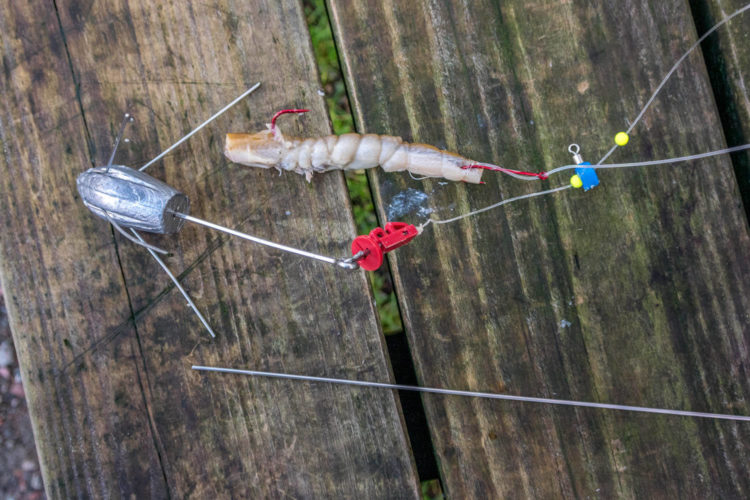 Rigs should be kept simple, with a pulley rig with either a single hook or a double hook pennel being my favourite setup for rays and spurs. A typical sea loch setup uses 60-70lb breaking strain bodies coupled with 100lb snoods in case the spurs show up. Although the dogs will grab most baits fishing with larger hooks, 5/0 – 6/0, will help keep them from hooking up while waiting for bigger fish. I tend to stick to Eagle Claw Red Devils available from UK Hooks. They are a strong Aberdeen style hook that are suitable for any fish or squid baits.

Cascade and flapper rigs are perfect for those who want to bag up on the dogfish. I favour 30-40lb breaking strain snoods rigged with Kamasan B940 hooks in size 1/0.

The dogfish will attack almost any baits, including worms for those targeting a codling. Mackerel is the most cost effective to use but sandeel sections are very effectual. 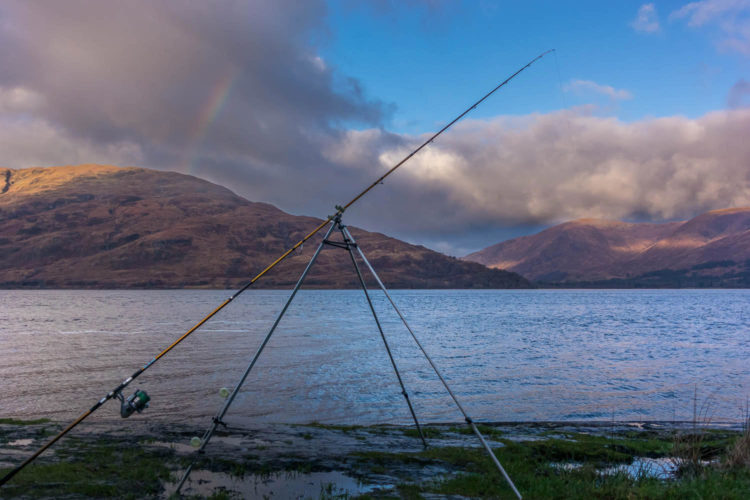 All the fish baits will produce rays but whole squid, either on its own or cocktailed with fish is robust and provides a measure of protection from the marauding dogs.

Mackerel, herring, bluey and rainbow trout will all produce, either on their own or as a cocktail with squid.

Festive Season On The Fylde Coast

[…] Indeed, time of day is an aspect worth giving some thought to. While it’s true that the thousands of rivers and lochs offer an almost infinite number of secluded spots, there are still many whose natural beauty appeals to fisher and sightseer alike, and you’re just as likely to drift into the frame of an unexpected selfie as a shoal of mackerel! Once the sun goes down, you’ll find hotspots like Loch Linnhe pleasantly peaceful and perfectly suitable for several hours of night-time fishing. […]