Fishing for Stripers at Nubble Light

Dana takes us on a trip to York, Maine where he fishes with lures for striped bass, or stripers, adjacent to the picturesque landmark of the Nubble Light.

Northern New England is not your traditional surf casting area for stripers. Yes, the New Hampshire and Maine coastlines do have sandy stretches, but for the most part it is rugged, rocky, cold and wet. For a more traditional surf casting experience one needs to travel to the southern New England states of Massachusetts, Rhode Island and Connecticut.

For this trip I was fishing with my good friend Jack Hanley among the rocks in York, Maine. It was a foggy morning as I made my way down Route 1A in York towards Nubble Light to where I would meet up with Jack. The tide was flooding (tide charts said about 4:30) and the waves were rolling up upon the beach as I drove by.

When I pulled into the parking area at Nubble Light I saw that Jack was already there, as well as a handful of tourists eager to see the sunrise over the cove or maybe a couple of anglers fall in. Either way, they would be in for a show. Nubble Light must be the most photographed landmark in this part of New England if the number of camera flashes going off is any indicator. 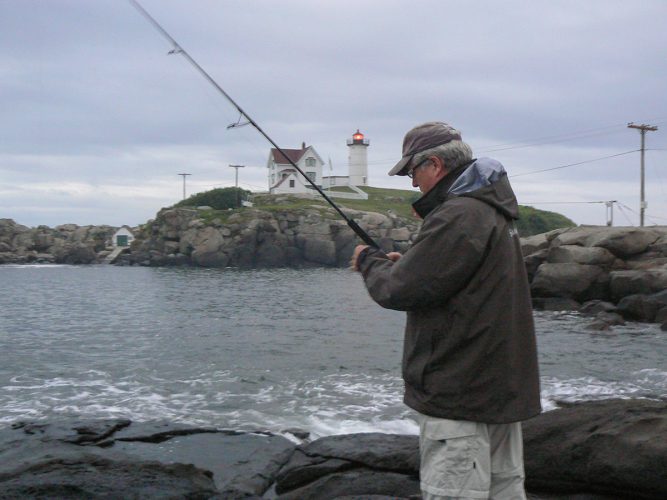 Amid the photographers, Jack and I prepared our gear. On this day I had two rod and reel set ups; one was a seven foot, medium action Shakespeare Tiger spinning rod, coupled with a matching Tiger reel. The reel spooled with 12-pound test Stren Sensor monofilament line. Onto this rod I was running a 1 ¼ ounce chrome/orange Little Cleo spoon. The other rod was a Shakespeare eight foot, medium action surf casting rod coupled with a Shakespeare spinning reel spooled with 17-pound test Stren line and a 20-pound test fluorocarbon leader. On this rod I ran a Skid Stick pencil popper surface lure.

My goal was to mimic the bait fish that the stripers were feeding on, which here turned out to be Atlantic mackerel. Jack, the consummate angler, also brought two rods. Both were seven to eight-foot spinning rods, the reels spooled with braided line. His main rod was equipped with a large surface lure; the other with a jig. With everything ready we made our way gingerly down the slippery rocks, made even more precarious by the lack of light. It was a toss-up on whether or not the tourists were going to get a show. Despite a couple of tricky moments, both Jack and I made it down without serious mishap. 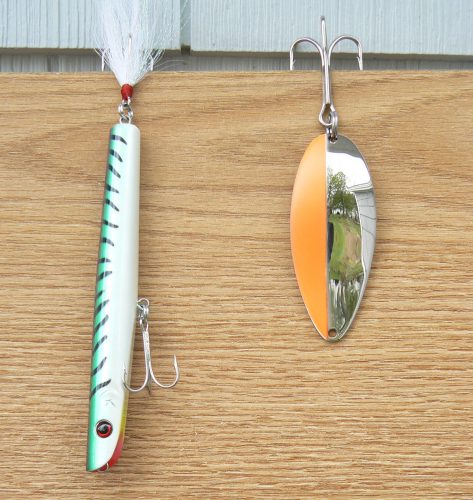 The tide was still coming in as I tried to find a good place to stand. This was made even more difficult with the low light conditions. If it wasn’t for the rotating beacon of Nubble Light, I would have been in a world of hurt. I bet those tourists were wagering on my chances of survival.

Cast after cast I made with no success. Within a half an hour the rock gods claimed my first spoon. Thankfully I brought plenty. Being lazy and the low light making it hard to tie the fluorocarbon line, I opted to skip putting on another leader and instead tied the lure onto the main line directly. That was a big mistake. On my first cast with the new lure something hit it hard. Setting the hook, I had the fish on for a couple of seconds, and then it was gone, along with my lure. While I never saw the fish, both Jack and I assumed it was a bluefish as the line looked as if it was cut by a pair of scissors.

As I made my way back to my tackle box to once again tie on another lure (and another leader) we were joined by two other anglers. They were there to catch mackerel. Throwing small spoons and letting them sink before reeling back, it didn’t take long for them to get into the fish. One fish doesn’t make a pattern, but a half dozen fish does. Jack and I decided to stay with what we were doing. With this many mackerel in the area there was bound to be predator fish, namely stripers and blues, taking advantage of the plentiful food supply, and we wanted to be part of that action. As I tied on my leader and lure (made much easier and faster in the sunlight) Jack started casting the surface bait. As if on cue, a nice striper exploded on the bait, and missed. Jack twitched the bait again and again the striper hit and missed again. This happened a third time, but on the fourth the striper was on. 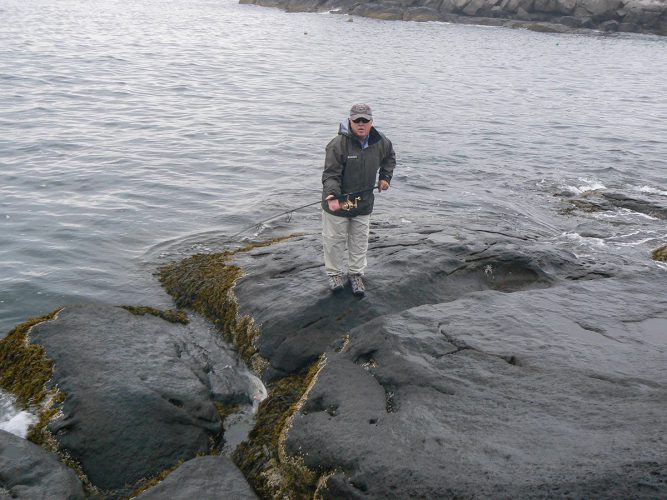 As luck would have it, the tide was going out and we were losing water rapidly, what was the water line was now exposed rock. Jack battled this fish like he had done it before (which he has on many occasions). It was almost poetic. Jack was able to work the fish into a gap between two rocks, but was unable to get it. I scrambled down the slippery rocks and was able to get ahold of the fish, being ever cautious of the lure’s treble hooks. One wrong headshake from the fish would have sent them deep into my hand. Handing the fish up to Jack, we got a quick photo and I then removed the lure and got a quick measurement. It was a very thick bodied fish (probably full of mackerel) and measured between 28 and 29 inches. After the measurement the fish was released back to the ocean. 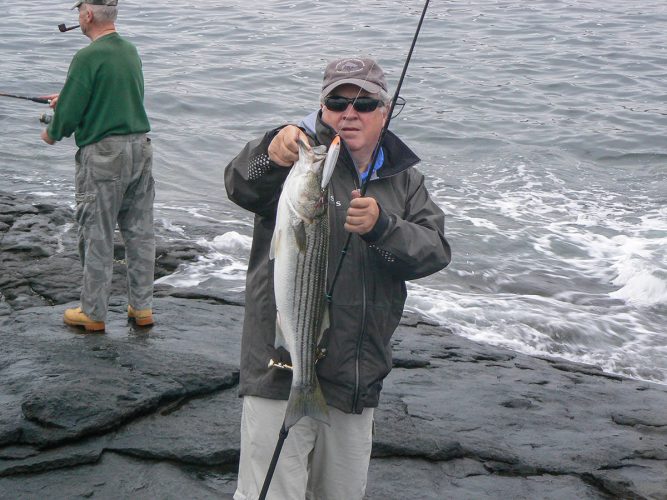 It was now about 7:00AM. The mackerel had moved on and with them the predator fish. The other anglers packed up and were gone and Jack and I were left with a drastic drop in the water. With no further action we decided to call it a morning and go get some breakfast. It had been a good morning, but it was time to head home. Route 1A through York was a flurry of activity; with crowds heading for the coast despite the rain that was now falling.