The shores of Loch Linnhe are a popular and picturesque venue for the travelling sea angler seeking both fish and spectacular scenery. The loch is also a popular tourist venue with the town of Fort William nestling at the head of the loch.

There are various marks with easy access on the east and west shorelines and Ardgour beach is one of the most popular. The like most of the low lying areas of the loch shores Ardgour beach itself consists of small to medium sized pebbles and stones.

The beach is sheltered from most wind directions but the area has a high annual rainfall.

How To Get To Ardgour Beach

Ardour lies on the west side of the loch and access is available using the Corran ferry. From the south the visiting angler should take the A82 through Crianlarach and Glencoe following the signs for Fort William. The ferry is on the left hand side four miles after crossing the bridge at Ballachulish. 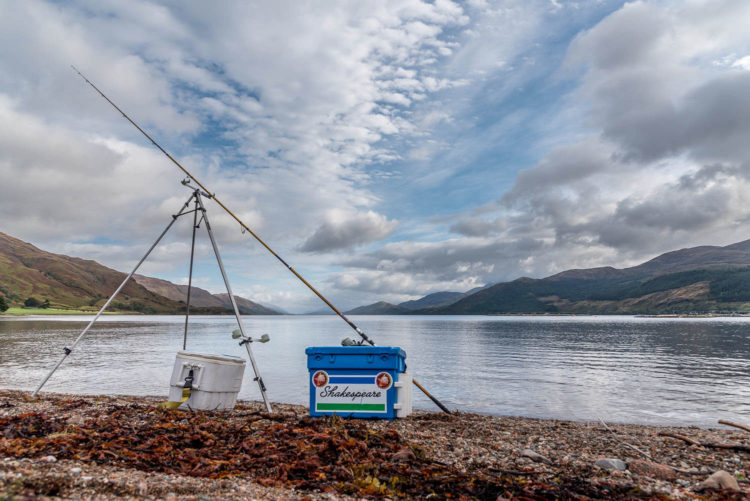 The ferry crossing lasts less than ten minutes and there is no need to leave the vehicle during the crossing. The first ferry in the morning leaves Corran at 06:30 hours and runs more or less constantly until 21:30 hours. The current price for a single journey in a car is £8.20 with foot or car passengers travelling free.

Anglers travelling from the north have an alternative route to the ferry where they can follow the A830 along the north side of Loch Eil to just west of Kinlocheil then taking the single track A861 round the southe side of Loch Eil and onto the west shore of Loch Linnhe.

The journey from Fort William on this route will take around 50 minutes and is can be busy in the summer. The local sheep have no sense of the Highway Code so watch out.

The main section of Ardgour beach is only two minutes north of the ferry pier. Parking is limited but there are spaces adjacent to the church, avoid Sunday mornings, and near to the fish farm jetty.

Most anglers fish the section of the beach opposite the salmon cages and buoys. This area can be fished throughout the tide although care needs to be taken if distance casting as there are a number of mooring ropes around the buoys, platforms and boats sitting off the shore. The angler needs to be aware of boat traffic to and from the fish farm is fishing near to the floating jetty. 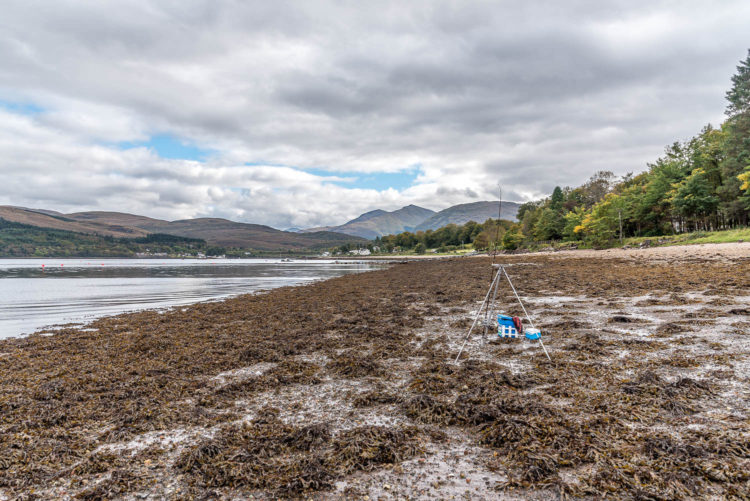 Looking east along the beach from the fence area

The top 50 metres of the beach consists of stones and shingle with an extensive band of bladderwrack below the mean high water level. Further out the sea bed slopes sharply down to depths of around 20 metres and there are a considerable number of kelp stalks.

This drop off forms a steep shelf which can result in lost tackle and fish on the retrieve. 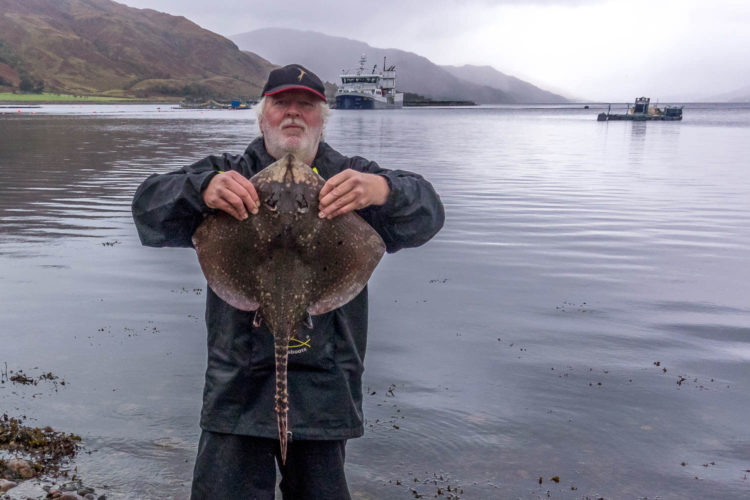 7lb Ardgour beach ray from the east of the salmon jetty

Venture further round from the fish farm jetty and the steep shelf fades away. Around the wooden fence which stretches out in the water from near a cattle grid the shore matches the main beach but the fishing depth is not greater then approximately 10 metres. There will be fewer tackle loses here but the bed of bladderwrack can be grippy. This area is best fished during the top half of the tide to take advantage of the water depth.

Fishing after dark can prove productive if the various floating obstructions can be avoided.

The target species at this venue is the thornback ray. Fish to double figures are a possibility although most are smaller than that. It is likely that these rays breed near to Ardgour beach as rays as small as 25cm have been landed.

Lesser spotted dogfish can be around in numbers with fish ranging in size from small pups to around the three pound mark. The odd strap conger has been landed from the deeper areas. 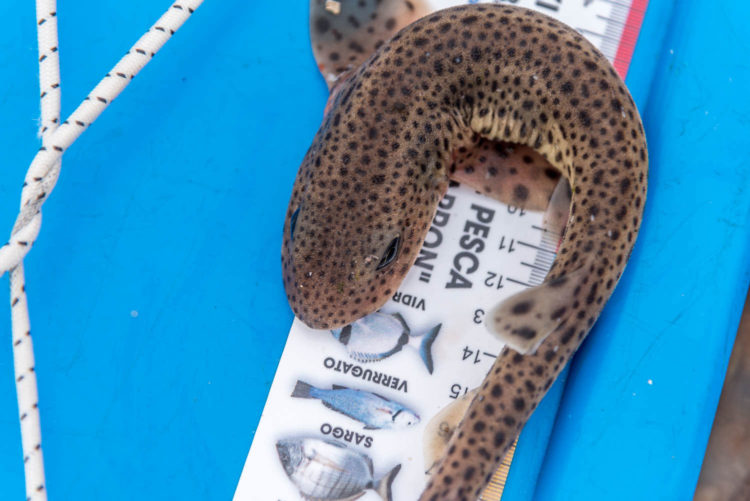 A lesser spotted dogfish pup from the beach

The occasional flounder has been landed from up around the fence and small gurnards can also be taken. In season mackerel roam off the shore for the lure angler to target with the chance of a seatrout.

The remainder of the species such as whiting, coalfish, codling and sea scorpions tend towards the mini-species size. 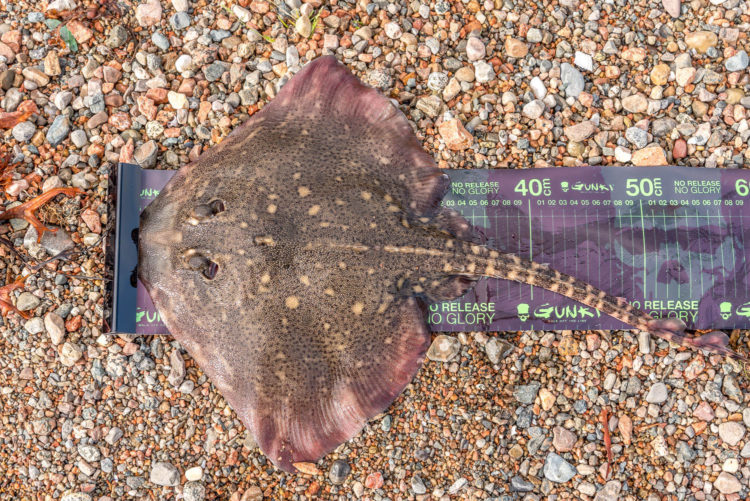 A typical Ardgour beach thornback from the north end

Shore crabs can be extremely active and baits quickly stripped so it is wise to allow regular bait checks, a 15 minute soak works for me.

Because of the steep shelf a longer rod and a fast retrieve reel will help keep the tackle off the bottom but inevitably you can expect some snags particularly when winding back in. To assist when pulling out of snags the main line breaking strain should be kept at the heavy end with a minimum of 30lb line being used. I favour 50lb braid on a robust fixed spool reel with a 60lb shock leader attached by a double Uni knot.

Rigs should be kept simple to help avoid loses with a pulley rig with either a single hook or a double hook pennel being my favourite setup. 50lb breaking strain bodies coupled with 40lb snoods work well and hooks need not be large. I tend to stick to 1/0 or 2/0 Eagle Claw Red Devils available from UK Hooks. They are a strong Aberdeen style hook that are suitable for any fish or squid baits. 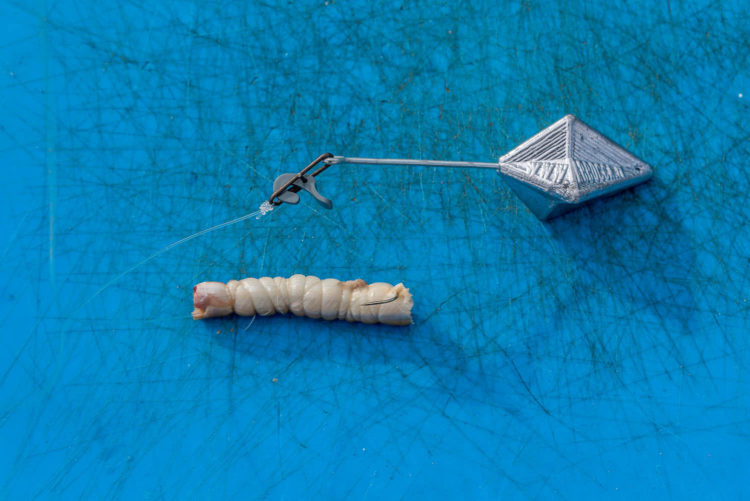 Sandeel is a popular bait

Cascade and flapper rigs do work on the shallower sections of Ardgour beach but bait and hook sizes should be kept large to try and avoid the nuisance species.

All the fish baits will produce rays but if I was stuck with one bait on this venue it would be a single sandeel. Mackerel, herring, bluey and rainbow trout will all produce, either on their own or as a cocktail with squid. Wrapping the fish baits with squid does provide a measure of protection from bait robbing crabs.

Alternative To The Beach

Approximately three miles north on the A861 there is a large layby which sits on the shoreline. There is a space for a couple of anglers to comfortably target thornback ray from an easy stance. 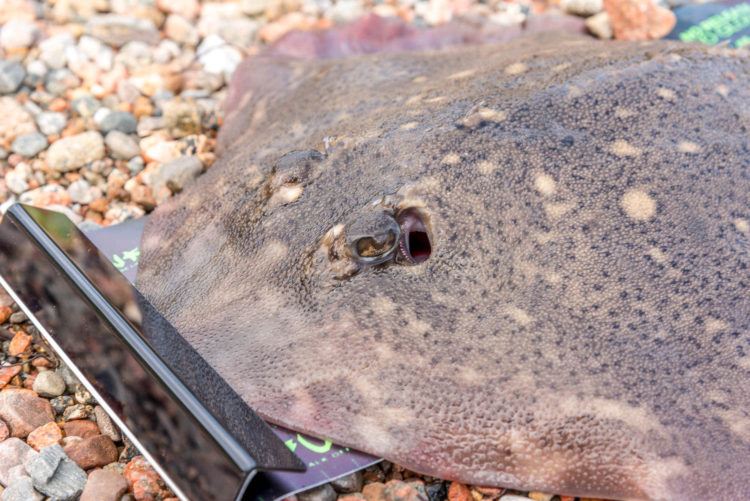 Thornback ray with a beady eye

The layby is big enough to park in overnight although it can get busy with camper vans in the summer.

There is a reasonable depth of water within casting range but beware of the boulders near the shoreline.

How To Catch Black Bream With Francis Couzinet