Namibia’s Skeleton Coast is a paradise place of fishing dreams, as Alderney tackle dealer Mark Harding recounts on his return from an unforgetable fish and wildlife safari.

Namibia is somewhere I have long wanted to revisit, and to my better half Fieona who had never been, I pitched a spiel of unrelenting sunshine, and fantastic sandy beaches bereft of people that stretch for endless miles. Now you might think that would sell the gig to the lady, but Fieona is a keen angler and only give the thumbs-up when I detailed the incredible fishing synonymous with the region.

After a tiring 10-hour flight to the capital Windhoek we were met by professional fishing guide Johan Burger. The next four hours were given over to fishing talk as we undertook the car journey to our base at Swakopmund just south of the Skeleton Coast. Sleep was a priority, and on arrival at the accommodation tomorrow’s pick-up times were quickly double checked before we bid Johan good night and hit the hay. 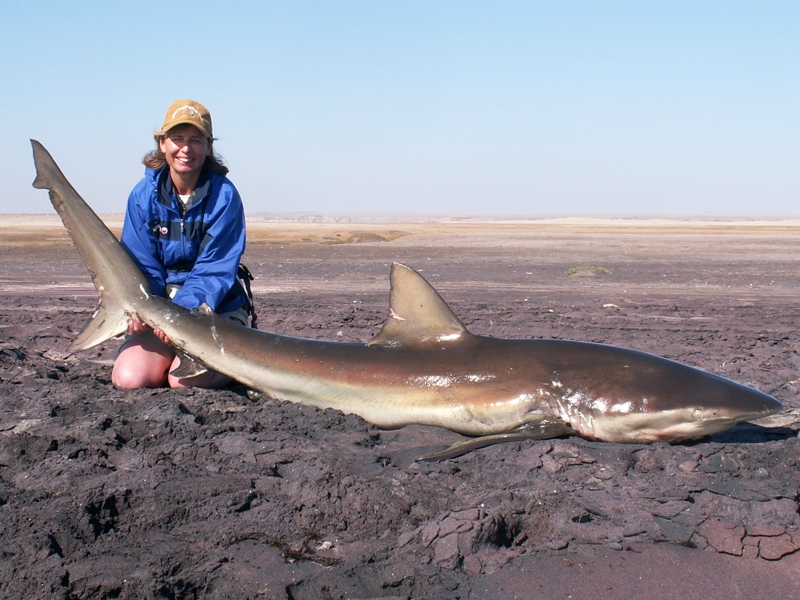 We rose early the following morning, our anticipation fuelled by Johan’s confident appraisal of our prospects. It was November, and the start of Namibia’s summer. The inland temperature is brutally hot but not humid, while the coast is so very much cooler. Johan picked us up as arranged at early o’clock in his Nissan Patrol 4X4. The first fishing mark was an area of reef some 20 miles away. Now that may seem a considerable distance to travel, but it was as nothing compared to the 130-mile distances covered with Johan on my previous visit five years hence. Of the four days we would fish, dreamy blue skies and the shimmering heat of the desert were fixed behind us. Above and out to sea the blanket of cooling cloud persisted.

Johan is a top guide and top angler who really knows his onions. His knowledge, understanding and attention to detail are incredible. Like a big ferret with a rocket up his rear, he would pull in at familiar haunts and dive out the car to check the sea temperature, water clarity, sulphur and oxygen levels. Much of this is done by sight, while his toes are the precision instruments used to gauge water temperature.

The reef was just uncovering when we arrived. Johan is very hands-on and immediately set about arranging a simple fishing base around the vehicle. Rods, reels, rigs and baits were expertly made ready while Fieona and I looked on. The rods are stiff 16 feet beachcasters carrying trusted Daiwa Saltist 50 reels loaded with 30lb line. 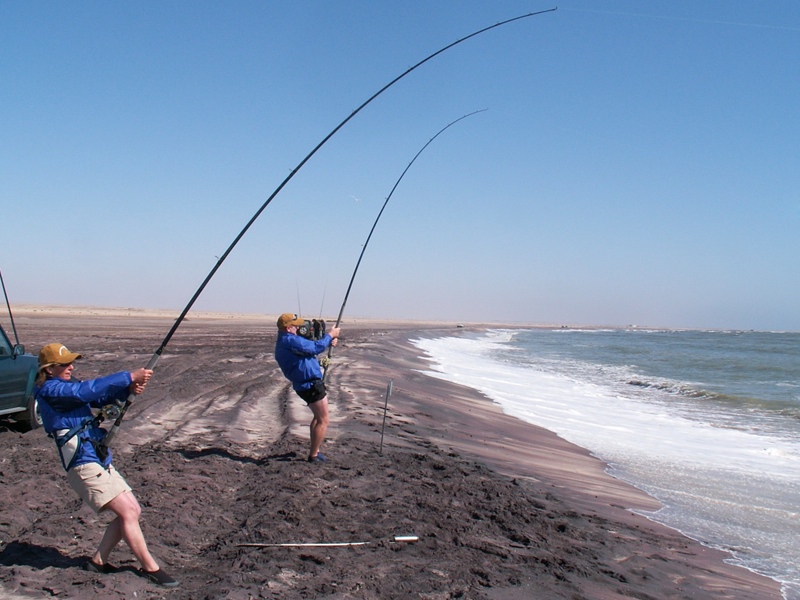 With the rigs baited, and following Johan’s lead, we gingerly made our way out over the reef. A fierce swell crashed all around us. The guides want their clients to catch fish and as accomplished anglers in their field it makes sense to leave the casting to them. The great big fish baits are proper pigs to cast any real distance, and in truth, few UK anglers can claim mastery of the specific technique required to get that large bait-lump out to where the fish most often feed. Johan made the job look easy; we watched in awe as he sent each bait well out to sea and much further than we could hope to achieve.

It came as no surprise when Fieona was first to catch. The spirited catfish she beached was perhaps under whelming, but it served to further crank up all our anticipations. Johan re-baited, re-cast and handed Fieona the rod… it was all of two minutes before she was being pulled along the shore by what was clearly a real fish. Line peeled off the reel as the hooked shark made its first run. Trussed in butt pad and kidney harness like some bizarre parody of a jet fighter pilot, Fieona was now clipped to the rod with no fear it being yanked from her grasp. Johan’s calming instructions were carried out to the letter and 45lb cow shark was beached.

Meantime, I had been left to fend for myself, and was caught up in my own tussle with what turned out to be a bullish gulley shark of similar size. With two sharks on the shore simultaneously Johan smiled and assured us these were just an aperitif to break us in gently. We persisted with this mark until the making tide pushed us off then headed eight miles back towards Swakopmund and an afternoon shot at the prized bronze whaler shark. Fearsome beasts, bronze whalers sat top of our wish list. These monsters grow huge, charge like rhinos and possess the power to rip the seat clean out of your pants before hauling you face first into the water beside them. 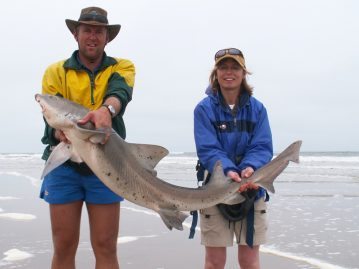 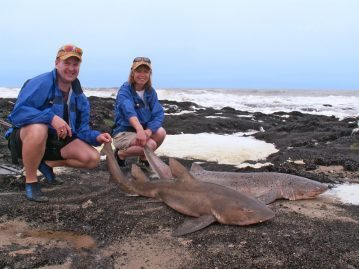 A change of tackle was required. The 16 feet rods were put aside as these exact too much of a physical and mental toll on the angler when attached to a serious bronze shark. Such long rods also unnecessarily prolong the fight and can result in a stressed and dangerously exhausted fish. Shorter but still very stiff rods are therefore used, which make for a more efficient but no less challenging fight. All going well, the end result is a fit shark on the beach, which can be promptly photographed and returned no worse for coming face to face with the angler.

Reels this time were Trinidad 50’s loaded with 40lb line. Each bait was carried on a pulley rig sporting a pair of 10/0 hooks and an 8oz lead. The biggest problem when a shark picks up a bait is setting the hook. The jaws of a bronze shark are damned powerful: they can rigidly clamp down on a bait and run without the hooks finding a positive hold. If you can imagine a large hook held tightly in a vice, then you’ll understand exactly why very aggressive striking is in order. This involves first leaning into the running shark, then dropping the rod horizontally and pulling back with all your might, perhaps four times in quick succession. Now this isn’t a problem for a chubby bloater like me, but it is clearly a problem for a daintier individual like Fieona. When I asked Johan what on earth she was meant to do? He just smiled, shrugged his shoulders and murmured something about up-to-date life insurance. Fieona was nervous; clearly the thought of being towed out to sea at 20mph by a big angry man-eater didn’t sit well with her! 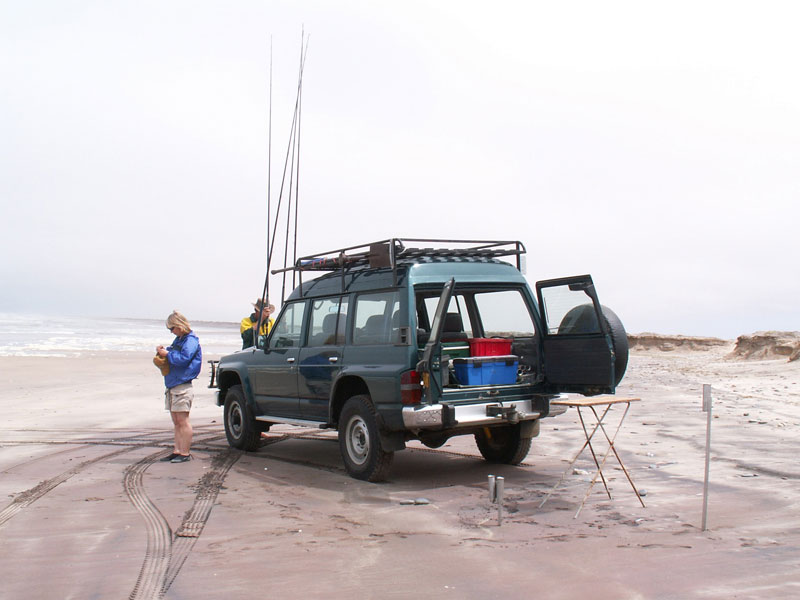 With baits in the water and our bloody rubby-dubby staked out in the surf, we waited. Minutes passed. Pelicans, comical in appearance, kept their distance, and all-seeing Johan stabbed a finger at a shark slinking up the line of dubby slick, and still we waited. 20 minutes later my rod bowed over and Johan screamed, “Strike! Strike! Strike!” My idea of a strike and Johan’s were clearly very different. He made the point by calling me dizzy weakling! Offended, I repeatedly belted the rod high and hard, managing to set the hooks as the shark tore away. Line emptied for an eternity before the mighty fish hung a left, heading south and in along the beach. I was barely able to follow on foot, occasionally gently coaxing it towards me. But at this stage he was taking yards against the intermittent inches that fought so hard to recover.

For fifteen minutes he crucified me, powering up then down the line of the beach, and toward me for brief spells only to tow out deep again at will. At last the shark showed signs of fatigue but shorter spurts of line-striping defiance remained until the end.

Johan stood by barefoot and ready in the surf. When the shark was within range he pulled a small holding gaff safely into the tough dorsal area. This does the fish no harm and allowed the two of us to manhandle it ashore for unhooking. Bronze whalers are a protected species in Namibia and are rightfully respected also for the damage they can do to you… the big swatting tail is capable of batting a man clean through the air in a blink, and the teeth…

Photographs were quickly taken and the 150lb shark released no worse for wear. Having witnessed me toiling with what was a modest shark, Fieona wasn’t sure she would cope. Johan was reassuring her when my rod went off again. I’d had scant time to recover from my previous encounter, but somehow mustered the strength to strike properly this time and set the hooks. 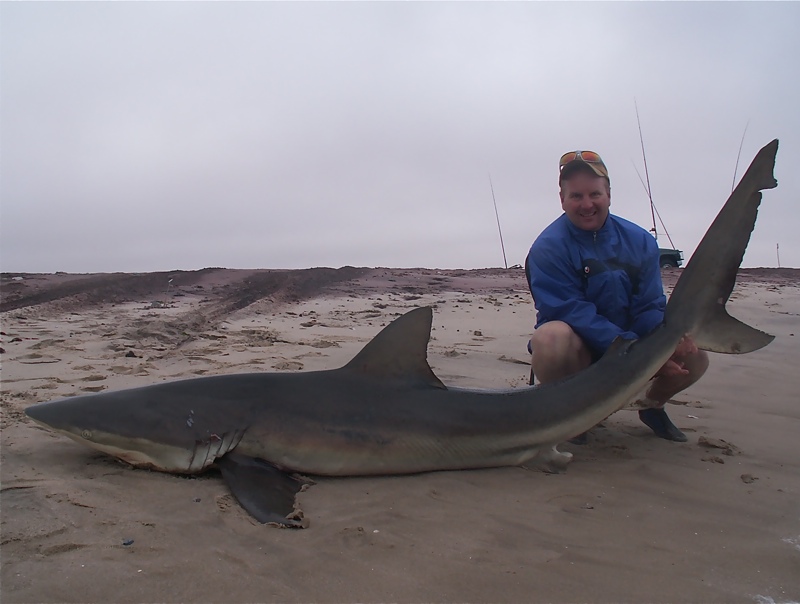 “Strike, strike, strike” was yelled from behind, and I turned to see Fieona’s rod bent alarmingly. She rose to the task and both of us where locked into big fish. Despite excitement at the prospect of another shark, I was more concerned for the physical battle Fieona was mixed up in and my attention swung between the two of us.

Line was screaming off Fieona’s reel. She dug her heels into the warm sand and leant her whole body right back in to the fight. Judging by the prodigious bend in the rod this was a big shark. My concern now was that Johan had his hands full with securing and beaching one shark, let alone a pair. I didn’t know whether to try and hurry mine in and go help Fieona, or to trust to fate. In the end it depends on if the shark is of a mind to come easier than it might. 20 minutes later I’d landed and released another 150lb shark, while Fieona continued the fight of her life with a considerably bigger beast.

Sheer grit was etched on her now very red face, and silence shouted loudly that she’d welcome no interference from me. Strain, sweat and sweet pain were worked through as she listened only to the calm coaching offered by Johan. The shark burst the surface several times and we could see it was the biggest yet. Fieona leant back as much as she could, inching line back to the reel. At one point she screamed as the shark contemptuously stole away more line than that it had taken 15 minutes of torture to win back… but she stuck at it and won.

Nearly forty minutes later a giant shark was steered to Johan’s clutches and ashore. Johan measured it and calculated the weight at 210lb… nearly twice that of little Fieona! It was a fantastic achievement. Watching the fish swim away strongly was just as exhilarating as catching it… though considerably less energy sapping. It had been a hard day’s work, but one that will live forever in our memories. With mission accomplished we just about made it back to the truck without keeling over… thank goodness neither of us had to drive back. 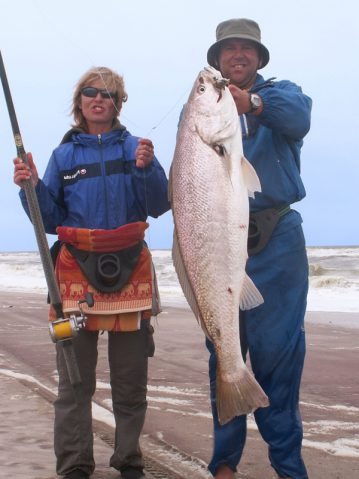 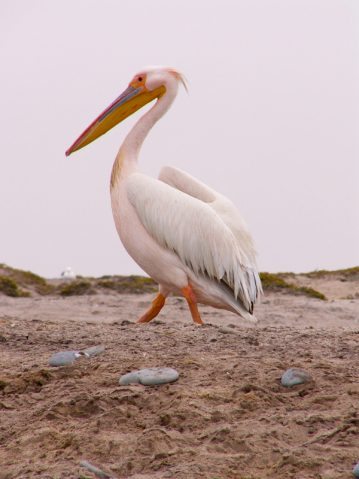 There is much more to Namibian fishing than shark. We fished for bream-like steenbraas and bass-like kob. The steenbraas average 20-25lb, while kob grow to around 50/60lb. Fieona had a couple of superb kob around 35lb. Over the piece, we managed seven bronze whalers, with both of us topping 200lb fish. I lost an estimated 300lb fish on the third day that jumped clear of the water several times before throwing the hooks. Our hit count also tallied numerous gulley sharks to 60lb, cow sharks to 45lb, sand sharks, catfish, steenbraas, kob and other bits as well.

The latter part of the holiday was a camping safari across the desert and semi-desert region, which we did with Johan after the fishing. That is another equally incredible story perhaps for another time, but check out the picture gallery below.