God bless close friend Georgina Lynch for marrying Beara Peninsula resident and artist Tim Goulding, because without cupid’s intervention I might never have discovered the wonderful sea fishing that this far flung south westerly outpost of Ireland has to offer. 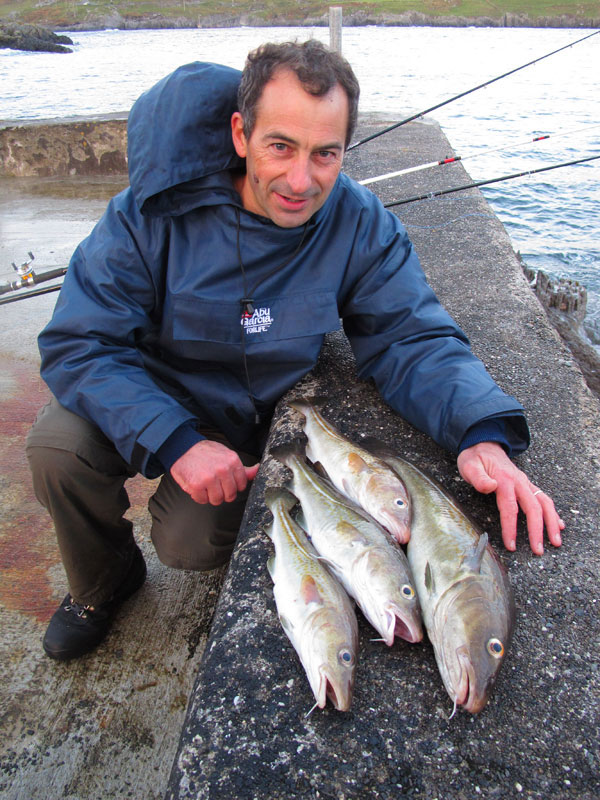 Having never set foot on the peninsula before 2005 I was captivated by its unspoilt rugged beauty, a throwback to a pre-Celtic Tiger Ireland. It took a couple of visits before I remembered to pack some fishing tackle, in the first instance just a spinning rod and a few lures. Knowing nothing about the fishing, and with little or no angling information available from which to formulate a plan, I decided to travel light and follow my nose.

First stop was Dursey sound below the cable car, an easy decision based on access and the fact that I would be fishing into a tidal stream that should concentrate bait fish. What followed was a memorable session during the first week in May 2005, which opened my eyes and heralded future more organised trips. Casting a silver 32 gram Kilty lure into the channel I let the spinner sink and sink and sink. Counting to forty it still had not hit bottom when the rod kicked over, not too heavy probably a small pollack I surmised. However the zig zagging non-stop fight to the surface soon had me thinking mackerel, which it turned out to be. Having never caught the species off the shore this early in the year I was happily surprised. Regaining my composure another two dozen followed in quick succession, all hitting the lure in the deeps. The mackerel along with a few small pollack made an auspicious start to my Beara angling experience.

Fast forward to September 2008 and the first all out Beara sea angling excursion, previous trips having been social visits with a minor fishing add on. A planned outing ensued with a group of friends and we organised a charter boat trip supplemented by some shore fishing. Staying at Paul and Anne Harris’ fine establishment “Dromagowlane House”, our charter trip out of Castletownbere was aboard “Tigger II”, skippered by Cornishman John Angles. Given the historical tradition of copper mining around Allihies on the peninsula and the general look of the place, I can understand how John laid down roots, Cornwall and the Beara being so similar.

The wonderful things about Tigger 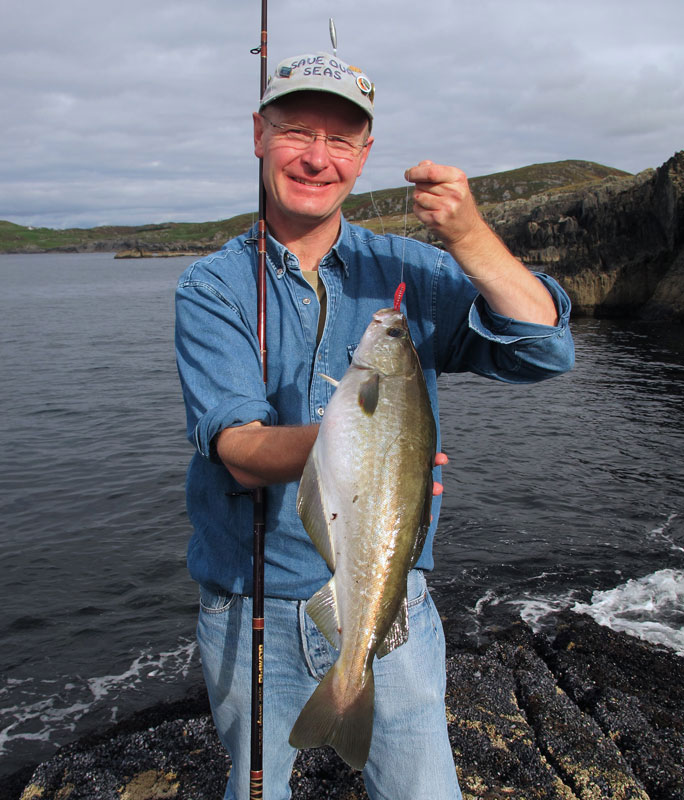 Paul and Anne were great having opened for business a year or two previously they now specialise in tourist anglers, with Paul mapping many shore fishing marks, a task which he continues to date with relish. With the owners understanding the requirements of anglers Dromagowlane made sense as a base, with frozen bait and terminal tackle for sale, along with essential drying rooms on site. Equally we could have stayed with John Angles, which subsequently I have, renting one of his self catering cottages located close to Eyeries. Both Paul and John are anglers and know their market, both fishing on their days off and pooling their information, so enabling their customers to have a real chance of success when they visit. Make no bones even experienced anglers will struggle on initial trips to this wild outpost. You have to be really focussed as there are so many opportunities. With limited vacation time choose a particular venue, mark, or species and concentrate you efforts on it. Log the experience and build on further visits, before too long the secrets will start to unlock and then the fun and amazement really begins.

Out first day afloat on Tigger II was fantastic, a south east breeze creating quite a swell we headed out to mixed ground about 15-20 miles beyond Crow Head. Fishing in 300 foot of water our drift brought us across ridges that followed a north east/south west axis. Pollack to double figures, cuckoo wrasse, cod and haddock to four pounds plus featured. Steaming inshore we anchored over rough ground and boated a succession of conger to over 20 pounds. Unfortunately no ling materialised on that trip but it didn’t matter, the seascapes were incredible with towering cliffs, and the knowledge gained especially how deep it can be clclose to shore would prove invaluable during subsequent later visits. Depths of 100 foot plus within casting distance for the average angler are common. If you want to lay claim to the Irish shore ling record then look no further, John Angles has already landed a 15 pounder from a rock mark close to where he lives. 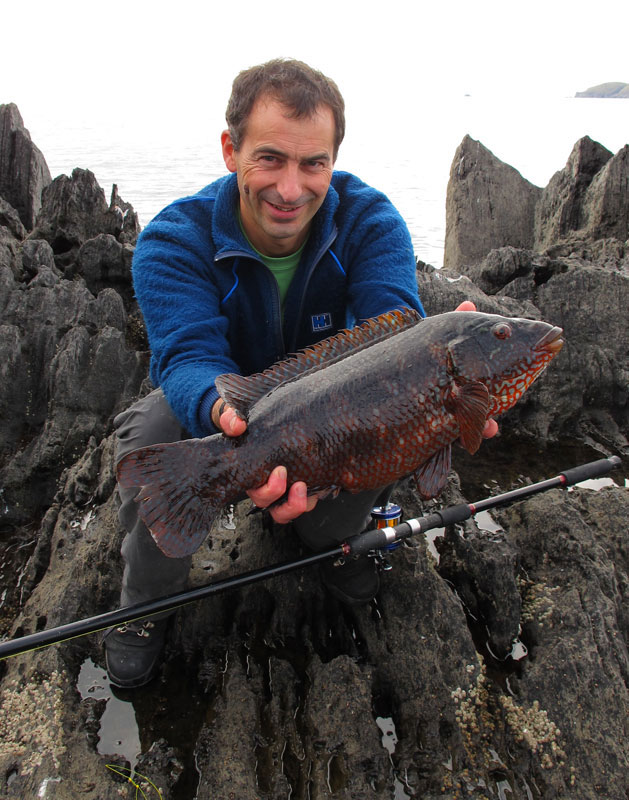 A chance meeting with Roger Ball on that trip forged a long range friendship which has resulted in some cracking sessions and real understanding of this superb piece of Ireland. Shore sessions with Roger, a native of Plymouth, and Gerry Mitchell have really opened up the fishing on the Beara to me. Roger’s knowledge of mullet fishing has proved particularly enlightening and the experience gained of venues, different times of year and prevailing weather have resulted in improving catches and species hauls on each visit. Our knowledge of bait collecting venues, marks, access, accommodation, and things to do besides fishing is now extensive, so we hit the ground running every time. There is still so much to learn but now we are able to mix exploratory days with known quality fishing, achieving a happy medium which means that no day is wasted.ose to shore would prove invaluable during subsequent later visits. Depths of 100 foot plus within casting distance for the average angler are common. If you want to lay claim to the Irish shore ling record then look no further, John Angles has already landed a 15 pounder from a rock mark close to where he lives.

What do we catch? Well to date the shore species haul includes mackerel, scad, launce, coalfish, pollack, codling, wrasse, conger, bull huss, dogfish, plaice, dab, flounder, gurnard, ray and mullet. Roger has also caught bass, and one year had mackerel on Christmas Day. The pollack have reached 6-8lbs, with the bull huss running to double figures. On a recent visit we found a mark which produced plaice to 1.5lbs and made sure that it was not a fluke by repeating the exercise last October. Our sessions so far have produced Irish specimen dab, mullet, and wrasse. Congers to date have been small but who knows what the next visit will conjure up, the big fish are there it’s only a matter of time. 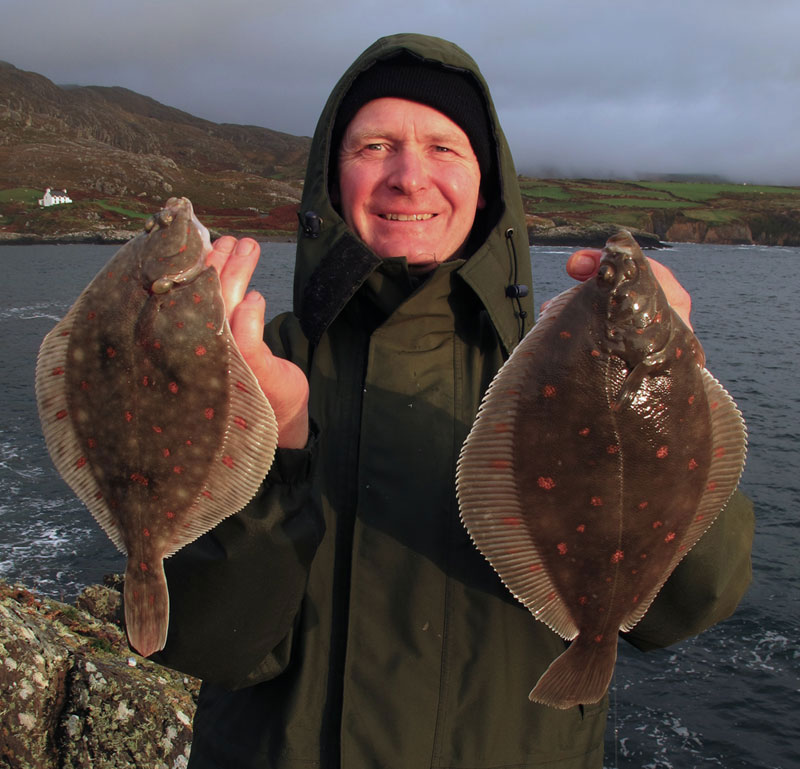 If planning a trip organise at least one boat session and you will not be disappointed. The pollack sport and lighter drifting can be covered with 12 to 20lb class gear and a 30lb outfit I cope with the conger at anchor. A coarse float rod will suffice for the mullet, or double up with a ten foot spinning rod for the shore pollack. Bring two beach casters, a heavy one for rough ground ledgering, and the lighter one for down the wall wrasse fishing. On the last trip I brought for the first time a saltwater fly rod and had superb sport with coalfish, pollack, and scad. Include all reels to match, terminal tackle, lures, weights, spark plugs (wrasse fishing), feathers and hokais, pre made rigs, in fact everything you can think of, as there is little or no tackle available locally. Pack also a bait bucket and spade. Lugworm can be dug and crab gathered behind the Eirenova factory in Castletownbere, while hardbacks can be collected along most rocky shores locally. Regarding the lugworm, be sensible and just dig what you need, back filling as you go along. It is not a prolific mark but there is certainly enough if the diggers are not greedy.

Plan to travel light as to get the most from your stay means a lot of hiking; there are very few park and fish marks. While some venues require a head for heights and a degree of coordination most simply require shanks mare to reach them. Therefore carry a rucksack, plan the target species the evening before and pack accordingly. Accessing marks on Cods or Crow Head could involve a two mile walk there and back, along with a rocky scramble. Not for the unfit or feint hearted, but as has been stated previously the rewards can be spectacular to say the least. 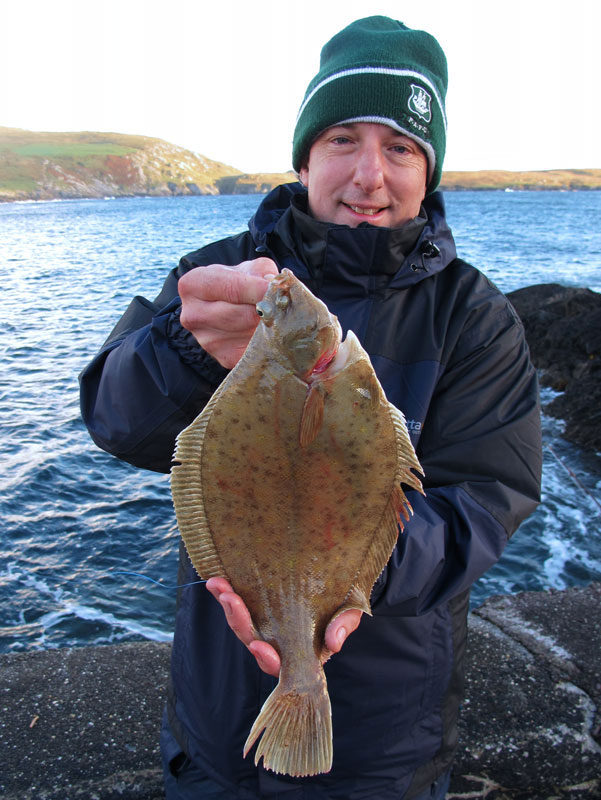 To wet the appetite my last visit resulted in the best shore fishing that I have experienced this side of 1990. I’m talking mixed fishing like that experienced off Greystones, Co. Wicklow three decades ago. Throwing in bait and not knowing what you are going to catch next type of fishing where, when you did inevitably catch a fish, there was no need to measure it for size. The October 2010 seas off the Beara were chock a block, it was a throwback akin to watching a David Attenborough programme. At one point on a cloudless, windless day my friends and I witnessed straight in front of us a large shoal of mullet meld into a larger shoal of mackerel, which became dwarfed by a similar shoal of sprat or herring, it was hard to distinguish. Offshore dolphins cavorted and hunted, it was a sight that I felt privileged to witness and will never forget.

That day and in fact every day of that trip exceeded the previous and gave out hope that our inshore waters can still recover from the hammering they have taken over the last sixty years. It wasn’t the big wrasse and pollack, the specimen dab, quality plaice, or mullet that brightened our trip, but the humble codling in such quantity and size that I could have been fishing Kilcoole, Co. Wicklow in the mid 1980’s. That nailed it for me, a magic experience in a magical place. It had been a long time since I last fished in an aquarium for that is what it was like. The seas heaved and every where that we cast quality fish were caught, from dawn till dusk. No exaggeration, that has been the experience every time, it just gets better the more knowledge I gain.

So get yourself down there, the fishing kicks off in May and improves as summer progresses into autumn. Bring suitable clothing and ideally a pair of hiking boots for the rock hopping. Being a peninsula there is fishing available whatever the weather, just fish the opposite side to the prevailing wind. Be careful of rogue waves, even on calm days the sea can just rise up. Allow four to five hours if travelling from Dublin. A typical schedule I use is to plan the journey to coincide low tide with arrival in Castletownbere. Meet in McCarthy’s bar, have a pint of the black stuff and a bowl of chowder, then off digging lug and collecting crab. After that its settle in to the accommodation followed by a spot of lure fishing to get the hand in. From then on it’s whatever the weather brings, for that is the arbiter.

My next trip down is pencilled in for late September early October, the pollack will be in and the wrasse are sure to give some sport. Early mornings if the sea is calm will be set aside for mullet, and there will be a few sessions fishing the sandy patches for flatfish. Even after six years heading down the potential is limitless, I have only scratched at it. That said the knowledge gained makes each visit that much more special. This time round weather permitting Cods Head will get a good deal more attention, as will Dursey Island, the trip on the cable car being worth the visit alone. Hopefully the sun will shine and winds will be light, I can’t wait…