Taming the beasts of winter

Despite being difficult to contend with, exaggerated wind and surf are often the very catalysts of good winter shore catches. Hayling Island angler Adrian Farley offers his advice on how to tackle rough weather situations.

Extreme conditions can make fishing difficult, impractical and sometimes downright dangerous. Indeed, if things turn really nasty, as happened to me once on Dover’s Admiralty Pier, then good sense says get the hell out of there. There are however, some ‘extreme’ circumstances where it’s possible to fish and take numbers of fish, turned on by feeding opportunities presented by the pounding sea and weather conditions. The biggest problems confronting us in such conditions are exaggerated wind, weed and surf, all of which can be compared to wild animals with a propensity to bite your head off if you’re less than careful. Of course safety is always the first consideration, thereafter consideration needs to be given to how such tempestuous variables are handled in terms of our fishing kit and attire. 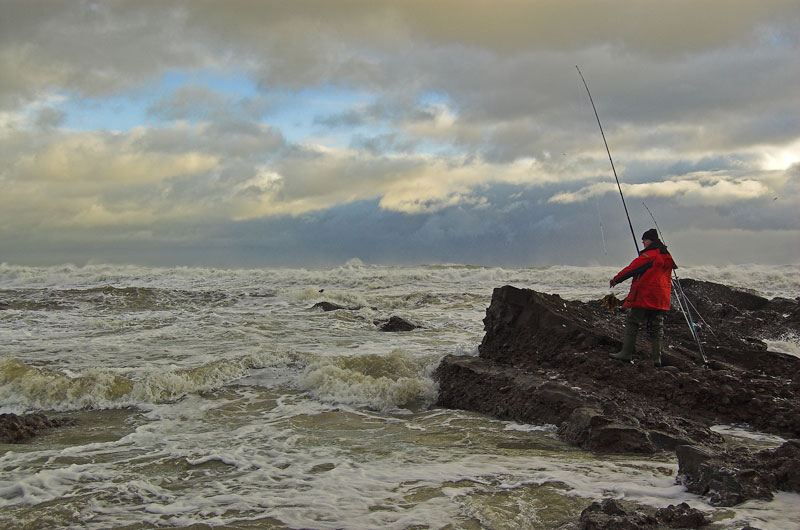 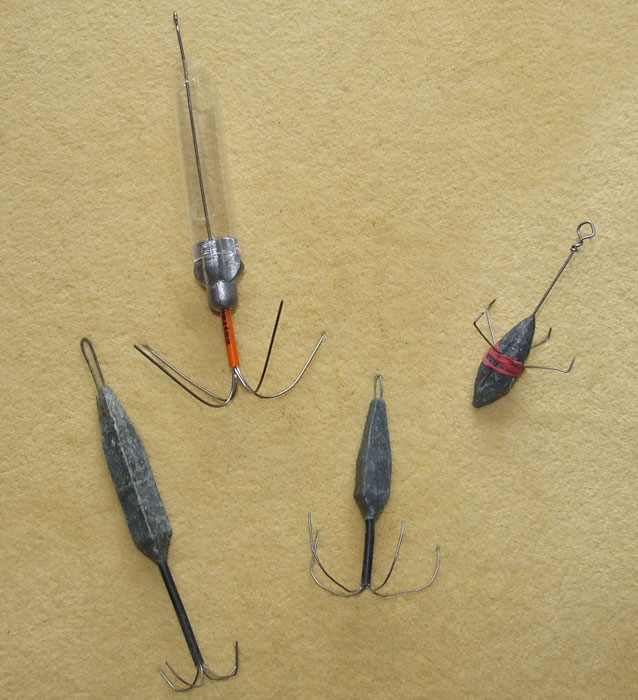 Searching tactics with rolling plain leads are out of the question in rough conditions, and instead baits need to be anchored where fish are feeding. Standard Breakaway or swivel-wire grip-leads don’t cut it in such instances either. Typically, they fail to bite into the bottom in the first instance, or quickly break out soon afterwards. Leads equipped with more holding power are called for, and these come in various guises. Any standard breakout lead can be are made much more efficient by tightly wrapping a thick elastic band around the grip wires to lock them in place; this effectively creates a ‘fixed’ wire effect.

Proper fixed wire leads offer the ultimate rig anchorage, and are best as long as the ground isn’t too snaggy. These are often used as standard where strong tides sweep close to shore at venues like Dungeness, Chesil and Orford, and need is compounded by very rough conditions. The excellent Gemini leads with either the red or yellow fixed wire nose attachments are just the job for harsh conditions.

It can also pay to increase the weight of the casting lead in rough conditions. As long as your rod is up to it, look to 6oz (170g) or even 7oz (200g). Any decent a rod rated 4-6oz will handle 7oz as long as casting styles are kept sensible. I’ve used the heavier versions of the new fixed grip D-Vice to good effect in such conditions.

The build up of seaweed on the line and around bulky leader knots in particular is one of the biggest headaches of fishing in rough conditions. Standard thick diameter leaders produce large knots that aggravate the weeding issue. Tapered leaders are the answer. These produce a small neat knot that is less inclined to snare accumulated weed slipping down the main line as the rig is retrieved.

Various companies including Daiwa, Drennan and SPRO all produce good quality tapered leaders. Another benefit of a tapered shock leader is that fixed-spool casting is made smoother. You can then often pull your tackle or fish clear of the water’s edge by walking backwards instead of trying to force the weeded leader knot through the top ring.

You can’t change the wind’s direction, but you can make things easier for yourself by casting into it when it is 45 degrees to the shore. Keep your line straight into the wind by casting 30 metres upwind of the rod rest as long as if space allows. The idea is to get wind and tide pushing weed straight up the line to the rod tip rather than forming a great straining bow which will pull even fixed-grippers out. Casting distance is severely reduced by a strong onshore wind. Moving to a heavier lead, and casting low and flat is the key to decent distance in howling onshore conditions. It’s the line which will drag your cast back, so don’t let it balloon upwards… aim low into a headwind. It’s as well to remember that fish like bass will likely be foraging just 20 or 30 metres out in these conditions anyway.

On a storm beach, it is often easier and more rewarding to fish low water when wave crests are smaller. Even lobbing twenty metres can produce excellent bags of bass and flounders when shellfish has been smashed up by strong winds. 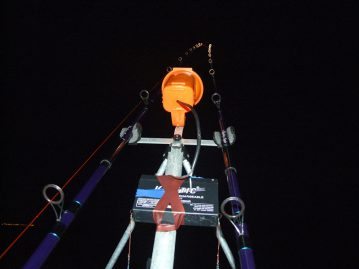 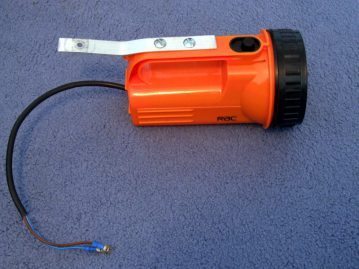 Too many anglers struggle at night with cheap, poor quality headlamps and perhaps a light stick on the rod tip. It’s no good spending five or six hours straining your eyes trying to tell the difference between a bite and accumulated clumps of weed. It is best to have a good headlight and reliable fixed light source to ease eye strain caused by training tired peepers on poorly illuminated rod tips.

My static lighting system has been developed over years, and fishing in darkness without it would be unthinkable. I know of several anglers who have adapted and adopted similar lighting arrangements, and it is surprising that no similar system specific to sea anglers is available commercially.

I make a perfectly suitable tripod light using a large 6V hand-held torch. A short piece of aluminium flat-bar is drilled and mounted via the rod rest’s top nut… this ensures the beam shines up the length of your rod/rods. To make the tripod light more economical, buy a sealed lead-acid battery (6v/4AHr), and install a 3Watt bulb. What you have now is a very effective rechargeable static fishing light.

Headlamps are a matter of choice. Some anglers prefer the less bulky multi-LED headband, while others bank the power and reliability of the like of Tiga and Samalite headlamps.

A stable, long tripod is essential during windy conditions. Don’t get anything less than six feet long and seven feet is better. For pleasure fishing pick one with two rod holders on a bar across the top, and two butt cups which can be positioned up the stem of the tripod. A bag of shingle or bucket of water attached via a hook from the top bar will make it much more stable. A sand spike just will not do during rough conditions. The trick in high wind and wave conditions is to keep the line out of the surf where the weed gathers, and thereafter to keep the rod tip as high as possible. Use the cups as far up the tripod as possible and use the maximum height you can. Keep a fairly tight line and don’t let weed drag the line down into the surf where most weed will be found.

It’s just plain fact that the more complex a rig you use in rough sea conditions, the more tangles you will get and the more weed you will pick up. Most of my short range surf bass fishing is done with a two-hook or single paternoster using a loop to loop connection. Avoid long flowing traces when casting into strong winds. 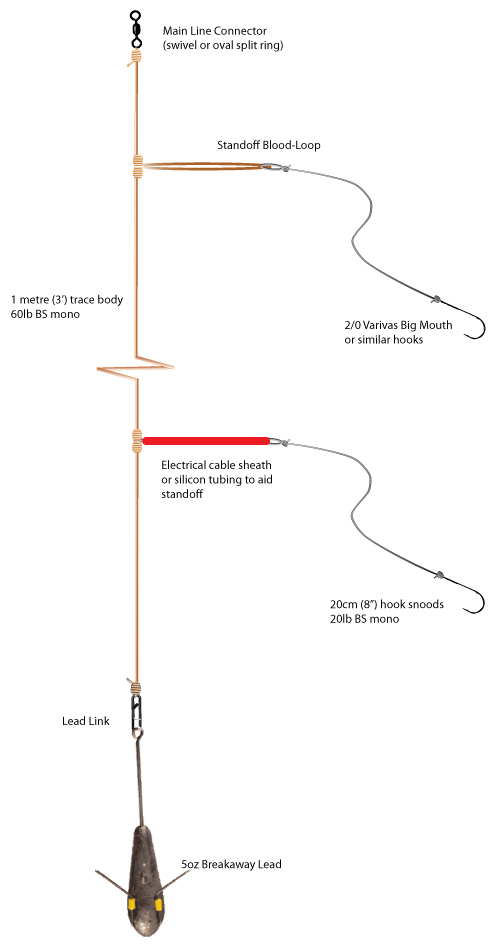 When looking for more casting distance, or simply to beat difficult winds, use hooks attached above the lead and use bait clips like the Breakaway impact shields, ‘Imps’ or cascade swivels to streamline the rig for casting. In a considerable headwind, flapping baits will cut your distance and shred baits.

A key to fishing success in heavy winter conditions is to use natural baits, which the fish are feeding on. In the eastern Solent where I live, this invariably means slipper limpets, which can be ankle deep on the shingle following strong south-westerly winds. And anglers will still insist on packing £12 worth of ragworms, when the better bait is often there for the picking. Further east, from Brighton to Deal, it might be clams, razorfish, butterfish, and even whole black lugworm thrown up the beach. Folkestone and Hythe are excellent beaches to collect your free-gratis bait before a session. Dwell on this one for a moment: there are many occasions through the year when you will not catch fish unless you ‘match the hatch’ as they say in fluff-chucking circles. 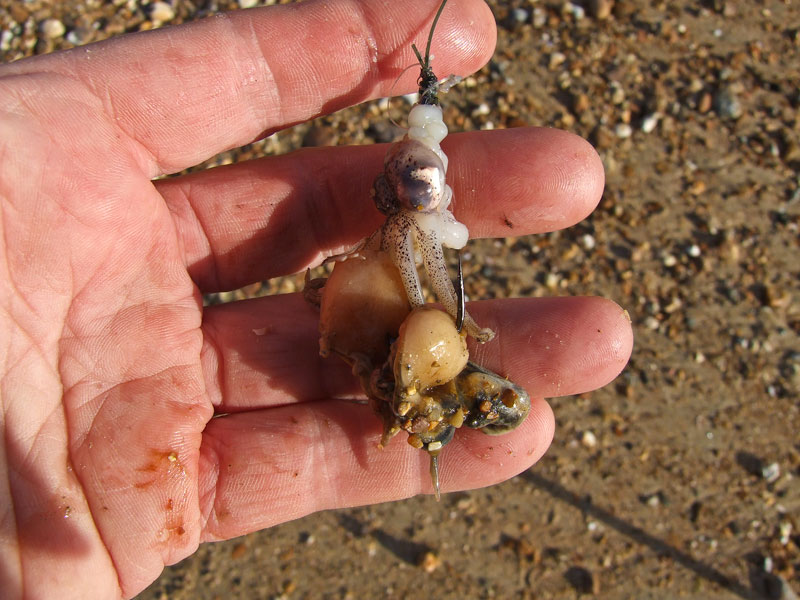 You cannot fish of function effectively when cold and wet, and comfort and warmth are essential. I prefer two or three base layers and a light waterproof suit, while others favour one or two piece insulated suits. A flotation suit is essential for rock fishing and steep shingle beach venues like Chesil or Dungeness. Wet feet are usually cold feet. Get yourself a pair of insulated winter boots. I prefer ankle deck-boots with either neoprene socks or thick woollen ones. 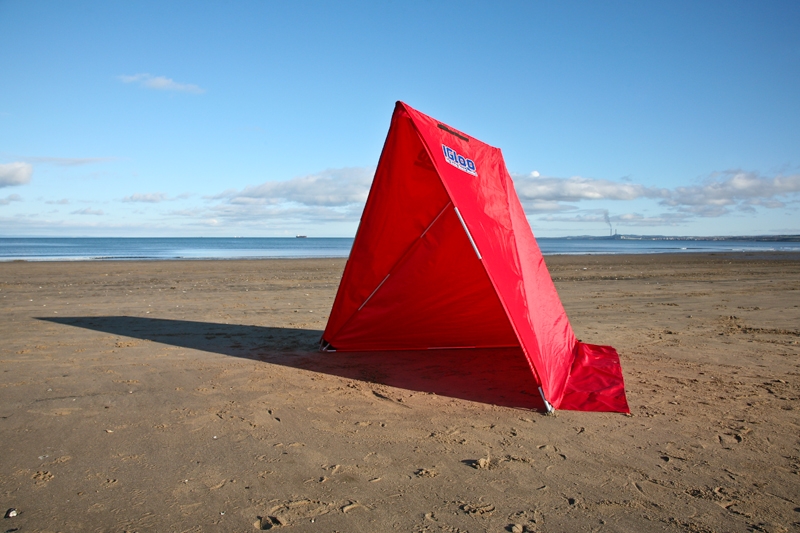 Your Argos brolly is not going to cope with strong winds or the rain on the beach. For around £45 you can get a Ron Thompson or similar shelter. Alternatively go for the big Ian Golds Igloo at around at around £140. Make sure you get the flaps fully covered with shingle or sand to aid stability. There’s no middle ground here… you plump for comfortable and dry or resign yourself to being cold, wet an entirely miserable!